Hunger drove Molly Wizenberg to Edison, Washington—but a bag of graham crackers brought her back 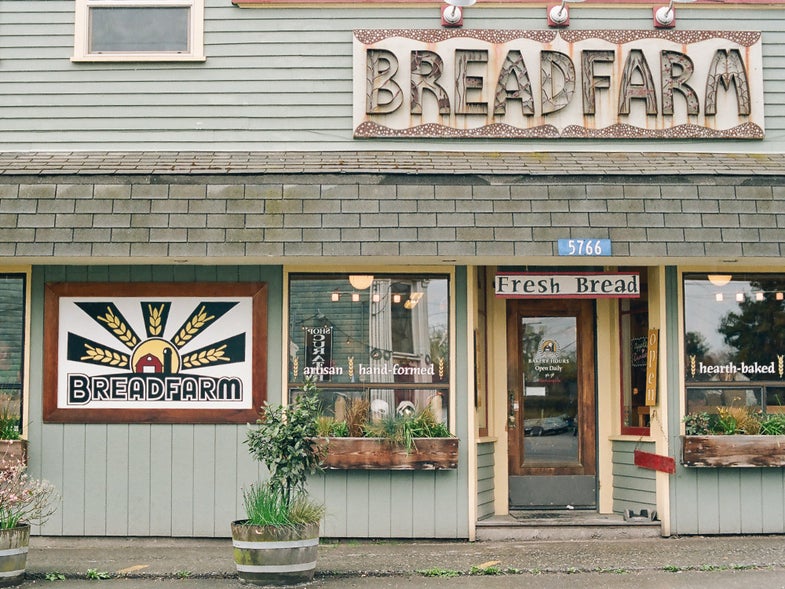 The first time I went to Edison, Washington, was out of desperation. I was with my husband Brandon, our two-year-old June, our dog Alice, and our friend Ben, on the way back from a day trip to Bellingham, a coastal college town ninety miles north of our home in Seattle. Ben, who is an opera director, was holding an audition in Bellingham, and it happened to coincide with our day off, and because Brandon and I like it up there—so much so, in fact, that we were married there—we invited ourselves along. It was a great day, unexpected and unplanned. But by the time we got on the highway to head home, it was late evening, our afternoon ice cream snack was long gone, and we were hungry. It was almost June’s bedtime. We had to act fast. Brandon had heard about a bar, he offered, called the Old Edison, about twenty minutes south of Bellingham, an old dive selling fried local oysters and burgers made from grass-fed beef. We took the exit for Edison and arrived at the bar in high spirits, only to notice the NO MINORS sign on the front door. Ours being a properly impromptu road trip, with its requisite carefree spirit and cheerful canine mascot, we had forgotten that in Washington State, one cannot legally go into a bar with a two-year-old. We stood beside the car, trying to look nonchalant as we starved to death.

Edison is a small town by any definition: its population was 133 at the 2010 census, and its main street, Cain’s Court, is roughly two blocks long and two narrow lanes wide. (Edison isn’t technically a town, if we’re really getting down to it; it’s a “census-designated place,” an unincorporated community within the largely agricultural Skagit County.) Most of the dozen storefronts along Cain’s Court were dark, but the lights were still on at Breadfarm, the bakery at the end of the block. We’d first heard of Breadfarm when we got married—at our rehearsal dinner, the caterers served sandwiches of beer-can chicken on their rosemary-sea salt buns—but we’d never been to the shop itself.

So Brandon hoisted June onto his shoulders, and we walked down the block, catching the bakery ten minutes before closing. We bought a loaf of Samish River Potato Bread and the last of the pastries in the case, and I noticed a glassine bag of graham crackers and added it to the heap. Back outside, Ben tore into the bread. Brandon reached for a pastry. I ripped open the bag of grahams and stuck my nose in. It smelled like browned butter and cinnamon and comfort. I took a bite, and it melted on my tongue like a spiced shortbread. I passed one to Brandon. His eyes went wide. I gave one to Ben, and he threw his head back and moaned. We stood in the street like that, on a cold March night, quietly freaking out. By the time we got back to the car, we were halfway through the bag.

The second time I went to Edison, Washington, was because we’d run out of graham crackers. For efficiency’s sake, I went alone this time, though I brought Alice for company, as well as another old friend, my checkbook. (Most of Edison operates on a cash-or-check basis.) It was an overcast morning, and because I sometimes—fine, always—like to live the Seattle stereotype, I queued up some Mother Love Bone and early Pearl Jam and Temple of the Dog (young Chris Cornell! So much hair! Marry me!). Sixty-five five miles up I-5, just past the charming town of Mount Vernon, I took the exit for Washington 11 North / Chuckanut Drive, a two-lane road that cuts northwest across farmland toward Edison and its neighboring community, Bow. There are two roads that lead to Edison, and you really can’t go wrong with either. Take Farm to Market Road from Mount Vernon, and you’ll pass verdant fields dotted with sway-backed barns and bordered by mountains half-hidden in fog; or take Chuckanut and get all that, plus the delight of hearing the Google Maps lady try to pronounce “Chuckanut.” This particular morning, Alice and I saw fields thick with potato plants, quarter horses grazing on kelly-green pastures, Victorian farmhouses wearing wrap-around porches like hoop skirts, and, not ten feet from the road, a great blue heron standing elegantly in the mud. I hung a left at Bow Hill Road—note that perfectly tiny post office!—and, watching the Edison Slough zigzag past the window, we arrived shortly in Edison.

Edison feels like a farming village turned artist colony, salty and smart. There’s a sense that things are happening there, and I don’t just mean a shuffleboard tournament or the Sunday night live music and dancing at the Old Edison (“the Old E,” if you’re in the know). Before I hit Breadfarm, I stopped for a coffee at Tweets Café, where peeling pink deer statues lead the way to the door (“You can make your check out to Tweets,” says a barista in a newsboy cap. “That’s spelled P-A-T-R-I-C-K.”); and I did some window-shopping at Hedgerow (vintage tableware, handmade leather goods) and Shop Curator (giant sea stars, bones, strange and beautiful objects under glass). I perused an exhibition of textile work at Smith & Vallee Gallery and bought some local Gothberg Farms goat cheese at Slough Food (“Edison is centrally isolated. We’re close to Bellingham, close to Mount Vernon, but out here on the back roads,” owner John DeGloria tells me. “Do you dance? I don’t dance, but I dance on Sunday nights at the Old E.”).

Breadfarm sits next door to Slough Food, and when I walked in around eleven, there was a line. Opened in 2003 by husband-wife baking team Scott Mangold and Renee Bourgault, the operation looks small from the outside but churns out an impressive variety of naturally leavened breads and handsome baked goods, using mostly ingredients from Skagit County farmers and producers. I bought another potato bread, and because it was Saturday, there was Cinnamon Twist Challah, so I got one of those, too, along with two packs of the graham crackers I came for. Renee, whose province at Breadfarm is cookies, pastries, and other non-bread items, was out working their stall at the Bellingham farmers’ market, but the woman who rang me up saw my bag from Slough Food and smiled conspiratorially, confiding that her favorite use for the grahams is as a vehicle for fresh goat cheese: “It’s like eating cheesecake!” I decide that I am never leaving—except that I have to be back in Seattle by four, to take over childcare when my husband leaves to work at our restaurant.

Luckily, there is cell coverage in Edison, and I caught up with Renee a few days later to beg for the recipe. I can’t take a road trip every week, but at least I can have graham crackers.