The unlikely story of a finnicky, hard-to-pollinate tropical vine and the forces that spread it everywhere 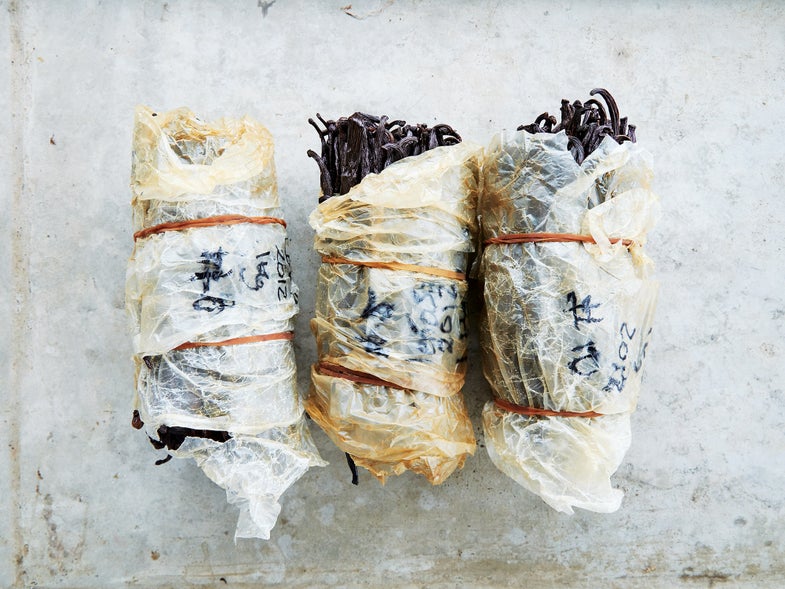 Like all fruits, vanilla begins with a flower: A single flower that opens up on only one day every year, and if you fail to pollinate it, that’s it. No vanilla bean.

The flat-leaved vanilla orchid (Vanilla planifolia) is a vine-like tropical plant with dark, leathery leaves that produces ornate, pale green flowers. Up until the mid-19th century, vanilla orchids were pollinated exclusively by a particular genus of bee in Mexico, called Melipona. Over the years, as demand rose, attempts were made to industrialize the pollination process, to no avail. Vanilla was stubborn.

All of this changed thanks to the ingenuity of a 12-year-old slave named Edmond Albius on the island of Bourbon, 500 miles east of Madagascar. In 1841, Albius discovered he could manually pollinate the orchid using a sliver of wood or a needle. And that’s how it’s still done today: painstakingly, flower by flower. After this delicate operation, the vanilla farmer must patiently wait for the pod to ripen and darken before it can be harvested. From there, the pod is washed, sorted, cured, and aged for at least a month, each stage of which risks failure. It could easily be a year after its initial harvest before a ready-to-use vanilla pod ends up in your kitchen.

Today, vanilla is produced in only a few climatically similar regions near the tropics. In Tahiti, the pods are plump, rich, and floral, often used in perfume. Generally the most sought-after, Bourbon vanilla is buttery and fruity, hailing from the French-occupied island of what is now called Réunion. Occasionally, Madagascar vanilla, which has a similarly creamy flavor, is mistakenly labeled as Bourbon. Mexican beans are the skinniest, with deeper sweet notes and a hint of smoke.

Interestingly, cacao has always grown in a similar climate, and despite our modern day tendency to see them as inverses, vanilla was and continues to be a crucial part of making chocolate. Aztecs have been using the pods to flavor their drinking chocolate since the 15th century, and Europeans continued to use it in later centuries as they perfected their chocolate candy making. Once it became obvious that a vanilla bean could elevate the simplest cake or cookie, vanilla extract—and in turn, artificial vanilla flavoring—was on the fast track to development.

Both are based on vanillin, a flavor compound that is also naturally present in wood, and that makes up about 2.5 percent of true vanilla’s flavor. Add to that 160 to 170 other compounds and you’ve got nature’s secret recipe for the tantalizing aroma of a cured vanilla bean. But whether derived from wood or manufactured in a lab, vanillin is the most recognizable core of vanilla’s flavor profile, and if you can get it, you’re halfway there. Then it’s just a matter of pulling together more compounds to approximate the flavor—all of which is cheaper than producing the real thing, though the end result is nowhere near as complex or satisfying. Even with a hundred odd other compounds, there’s no capturing the true essence of the bean.

Vanilla sold for roughly $9 a pound in the mid-1990s, but with climate change, widespread drought, and underpaid, disillusioned farmers, prices have risen steadily. Today, vanilla costs nearly $115 per pound. However, this doesn’t mean we should rely on the synthetic stuff; it just means we should use a little bit less, experimenting to see how far a whole pod can go—leftover pods can be dropped into sugar for a flavorful infusion or lightly dried and pulverized for subtler applications. Though seemingly ubiquitous, vanilla is actually complex, sensitive, and precious. And that’s worth celebrating in all its natural glory.

Read More: This Costa Rican Family Farm is Working to Save Vanilla From its Own Success » Christina Holmes

Weird Things to Know About Vanilla

Vanilla By Any Other Name

The only popular food from the New World that lost its original name—tlilxochitl in Nahuatl—vanilla was once vainilla or “little scabbard.” The bean itself was called vaina, from the Latin vagina, meaning “sheath.”

In early 16th-century Europe, vanilla was used solely as a flavoring for chocolate. Not until 1602, when Queen Elizabeth I’s pastry chef Hugo Morgan suggested she might like vanilla’s flavor, did it make its star debut. By 1750, vanilla ice cream was available in Paris, and vanilla-scented pastries were commonplace in upper-class kitchens.

In Case of Theft

During the French colonial period, Madagascar growers began branding their beans with unique designs to help identify them in cases of theft. The tiny tattoos, which are chiseled in two weeks before harvest, are visible even after the curing and drying processes.

After saffron, vanilla is the second most expensive spice in the world. To stretch pods, make homemade vanilla extract (in a glass jar, submerge spent pods in 80-proof alcohol like rum, vodka, or bourbon; seal, and infuse for at least a month; remove pods when desired intensity is achieved) or vanilla salt (add spent vanilla pods to a container filled with flaky sea salt, then use as a finishing salt for sweet and savory foods alike).

Lior Lev Sercarz is the founder of La Boîte in New York City. His book, The Spice Companion (Clarkson Potter), will be released in November.