The Magical Journey of Marshmallows From Royal Indulgence to Childhood Propaganda

The exotic allure of the air-puffed, all-unnatural gooey candy 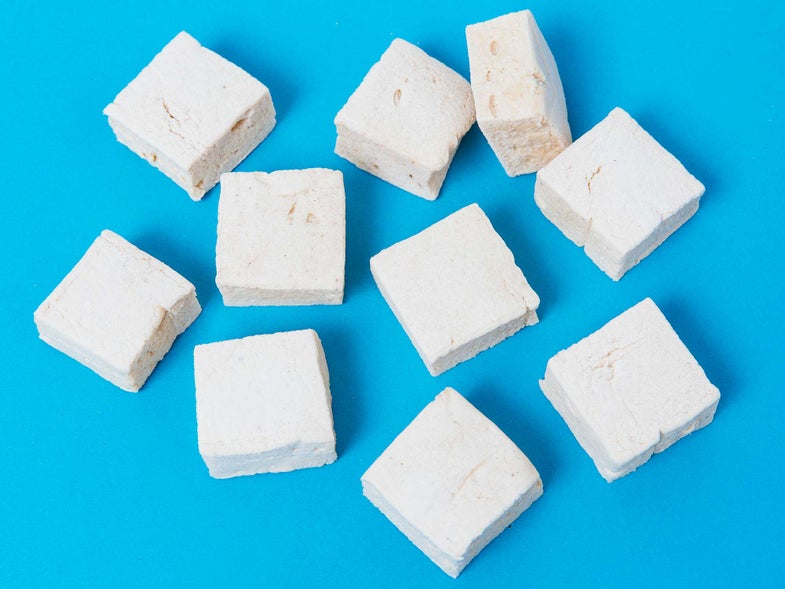 There were only two ways to eat marshmallows in my book: stale or burned. Looking up at the world from three feet tall and age five going on 25, I knew how I liked my Kraft Jet-Puffed. Hard or charred. And, every other weekend, my dad humored me.

In anticipation of my arrival, he’d leave a bag open in the cabinet to slowly petrify throughout the week so that, by the time Friday rolled around, they were sugar–dusted Styrofoam bricks. Popped into your mouth, one by one, they were crunchy, then tacky, then—when worked over by toddler teeth for 30 seconds—gooey like taffy.

Even better were the kind made hot and bubbling over a fire, expanded innards crackling beneath a pocked and ashy sugar skin. On summer camping trips, I couldn’t wait for the sun to go down so I could skewer mallow after mallow, singeing them over the smoking logs until they were blackened like coal. Inevitably, burnished sugar coated my hands, mouth, hair. It felt exotic to eat those pristine curvilinear puffs, which resembled absolutely nothing in nature—except for maybe clouds—while in the middle of the woods. It was a delightfully manufactured reward after a long day of hiking and horseback riding. It felt plentiful to reach into a full bag, warm and petrol-scented after a day packed away in a hot car, and turn it into a mass of grilled sugar.

If this all sounds a bit American dreamy, it’s because it is. The very idea of marshmallows—and the marketing that’s been created around them since the early 20th century—is to infiltrate impressionable young minds. To weave through childhood memories, leaving a sticky, romantic film over scenes of camping trips, backyard barbecues, and autumn bonfires. This is not to mention winter afternoons (hot cocoa), summer potlucks (ambrosia salad), and Rockwellian holidays (sweet potatoes). Take this report describing a New Jersey beach scene, appearing in an August edition of The New York Times from 1902: “A marshmallow roast took a lot of young people from the Parker House down on the beach Wednesday evening, and there making a fire, they gathered around the pile of burning driftwood and spun yarns.”

Or this note from Marcia Camp, Campfire’s Director of Home Service (a most certainly fictional character created by the marshmallow company), in a 1934 booklet called “Campfire Marshmallow Cookery”: “When you keep a package of Campfire marshmallows on your pantry shelf, and this booklet close at hand, you have the answer to many of your puzzling pudding, cake, frosting, ice cream and confection questions.” As if, before marshmallows came along, there was a great gaping hole in the canon of American desserts (see: Rice Krispie Treats). Even if there wasn’t, marshmallows did a very good job at squishing themselves into our consciousness.

But how, exactly, did they work their way in?

An ironic fact about marshmallows: Their name has been coopted from nature. Althaea officinalis is a perennial plant whose prefix tells you exactly where it likes to grow—in marshes—and, over the centuries, it’s been cultivated by the Romans, Syrians, and Egyptians for its medicinal properties. Its roots produce mucilage, a viscous, gummy sap helpful in treating indigestion and inflammation. Pliny and Horace extolled the marshmallow plant’s virtues for sore throats and heartburn. Egyptian royalty loved the stuff. But for all its favor among philosophers and wisemen, there is absolutely no trace of the plant in modern versions of marshmallows, and there hasn’t been since the early 19th-century.

In ancient Egypt, marshmallow was mixed with honey and reserved for kings and gods, according to How Products Are Made. The modern mallow, though, has its origins in mid-19th-century France where the plant’s roots were mixed with sugar and egg whites and placed in molds to create pâte de guimauve, the old-fashioned equivalent of cherry-flavored cough syrup or gummy vitamins. So palatable were these confections that, eventually, the marshmallow plant was left out altogether and they became, simply, candy.

In the U.S., gelatin replaced egg whites, and marshmallows began to be produced on a truly mass scale in the 1950s, when Alex Doumak of Doumak Inc. (which owns Campfire) patented the modern-day jet-puff process. Instead of being poured into individual molds, the sugary, gelatinous mixture was extruded into long tubes, chopped into pieces, and pumped with air until puffy. Kraft Jet-Puffed followed. Grandmas blanketed buttered yams with them. Parents studded mugs of hot cocoa. Graham cracker companies and Hershey’s found a perennial bedfellow. And kids everywhere rejoiced, and stuffed themselves full around campfires all over America. Because where marshmallows are, prudence is not—half of the satisfaction in eating them lies in quantity consumed. One-hundred-percent of the American corporate brilliance lies in selling sugar-air.

But what timeless, beloved sugar-air it is. There are few other foods whose minuscule density justifies a kind of romantic overconsumption, rooted purely in nostalgia. Perfectly aware of their surgically fabricated beauty, I’m still prone to the marshmallow’s canned allure, a feeling sustained by a couple of memories crystallized in my pysche more than 25 years ago. Today, amid a cabinet full of organic nuts and dried fruits, chia seeds and raw cacao, is an open bag of marshmallows, chalky and stale and standing by.