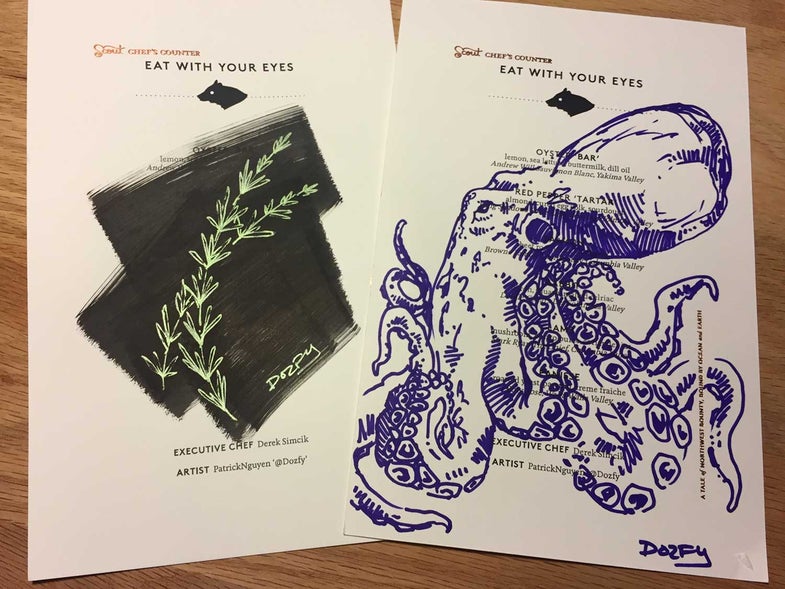 When servers ask Patrick Nguyen if he would like to hold on to the menu, he always says yes, but not for the reasons one would expect. Nguyen works in tech by day and by night is an artist. He creates menu art, sketching on top of the night’s specials, creating black and white renderings of oysters, squids, trees, whatever the restaurant inspires that night. His designs often begin with bold strokes of black, a foundation for his sketching in white on top.

The drawings began as a gift to the kitchen for a great meal, but then he noticed them migrating onto restaurant walls, taped up on display. This gave him the confidence to share his work publically. Slowly he turned sketches into commissions for menu boards, which later became larger projects like murals. Restaurants becoming his artist’s gallery for displaying his work. First in Atlanta, where he drew for popular places like Staplehouse, now in his new home in Seattle, where he has worked with Eduardo Jordan, of Junebaby, among others. Once just inspired by chefs, Dozfy, his artist alias, now collaborates with chefs to create live art experiences in their restaurants.

Dozfy spoke to Saveur about his process and inspiration for his work, as well his new interactive series collaborating with chefs, called ‘Eat With Your Eyes.’

How did you get started drawing on menus?

I started about four years ago in Atlanta. At the time I was with a group of friends and I would just draw on anything possible, which included receipts. I remember throwing one way and I caught one of friends digging through the trash and was like, ‘whoa what are you doing’ and he said, ‘well, I love your artwork, I wanna keep it.’ And then a mutual friend of ours, who worked in the restaurant industry, said ‘you should just draw on the menus, we throw them out anyway. We print them once a week.’

Do you remember your first piece of menu art?

It was at Leon’s Full Service in Decatur, Georgia, I drew a lion. I recall giving it to them and then six months to a year later, I came back and I was sitting at the bar, and underneath was the menu taped up. I was like “oh you kept that!” and the bartender said, “We love that piece! It’s our favorite. We always wondered who drew it.” I considered it a gift to the kitchen, because they don’t get to see what’s going on while stuck in the back cooking. So it’s an appreciation and thanks for everything they do.

Do they take the entire meal to create?

Depending on the medium, what kind of pen I use, it takes me about five minutes to finish one drawing. It’s pretty quick. I have drawn for 25+ years, so I have gotten my own techniques down. I know what I can do with the equipment I have. It’s second nature.

Did you always have this particular style?

It’s kind of ironic because everyone always thinks it’s kind of street art, but it’s not really. If you look at my website you can see a range and that comes from my training. I’m most known for the white on black work, which actually was developed when I tried to draw Ansel Adams photographs. I would try to emulate the black and white photos he made.

The pens I use on a black background creates this amazing affect. With the white on black you kind of have to find a middle ground, you can’t be too detailed. It’s a matter of the economy of line work, so that the subject pops, in order to catch the viewer right away. It’s how you create this sublime moment with the viewer.

How did you develop this technique?

I have always drawn, but I became more serious with sketching in high school. I made this goal, which I have stuck with for ten years, to try and finish at least one sketchbook a year, some years I did more than that. I got in that habit in order to hone my skill. Then I did my undergrad in fine arts at University of Texas, Austin, where I’m from. Got my training there, but my fine arts training was more about the thought process and why I draw. I work on all styles though, like recently I have done these three murals, in chalk. The plate art is my new kind of area of concentration.

What exactly is, ‘plate art’?

It’s an extension of the menu art. The plates are already fired and coated, so what I am doing is applying a black paint on top and engraving into the paint an image. So it’s the same process as the menu art, like my white on black work, but on plates. The idea is that when you go to museums and you look at plates or even in people’s home where they have the fancy China, they own it for special occasion and put it on display. That’s the idea of the plate art. Taking a restaurant plate and displaying it like you do a painting. So the canvas is the plate. The plate art is not food ready. It can be, but it wasn’t intended to be. It’s intended to be art on display.

And this is what you are incorporating into your ‘Eat With Your Eyes’ series?

The event is called “Eat with Your Eyes,” a play on words. The idea behind that event is that Chef Derek Simcik, (of Scout in Seattle’s Thompson Hotel), and I both take turns plating the food, guests are supposed to guess who plated what and the prize is the plate art. The event had 11 diners, the prize winner took home a plate with a squid design.

Right now I’m focused on this idea of: can I engage the audience to like the art but also have a meal? Put art in a relaxed setting. Talk with an artist over food like you would with family and friends. Art becomes the bridge of conversation. This year I have focused on how can I make an experience out of the art but not as a performance piece.

Ever consider leaving the day job and going full time?

Under the right circumstances.

Menu art to me is amazing and I continue to do it because the reactions I get good or bad are genuine or priceless. I have been a starving artist and I have been in a position where it didn’t go as well as I expected. The menu art was a rejuvenation, where I became willing to do art work and share it. I was never going to stop doing art work but to share it was a different story. Menu art opened the doors for that, allowed me to have an audience that likes my work.

It’s not easy though, to make it a full time job. If I can always maintain that balance of happiness with artwork, then yes I’d do it, but it’s early yet. We’ll see.