I sometimes wonder whether I’m a bit too particular about my morning toast. But I recently saw a meme go around that got me thinking. You know the meme: It shows nine slices of toast at different levels of browning, from pale, barely cream-colored to black-as-night, and the person posting it wants to know how you like your toast. I’ve now seen enough heated debate on the subject to know that I am in fact not too passionate about my toast and that there are folks out there who might need to work out some aggression in healthier ways. If I had to measure my passion for toast, I’d say I’m about a 5 or a 6, which, incidentally, is the level of browning I prefer—toast that’s a deep golden brown, but still a little chewy in the middle.

Over the past week, I’ve toasted over 100 slices of bread in five different four-slice toasters to determine which models were the best. Why so many? I started each test by selecting the medium setting and making four slices of toast. I took note of how long each machine took to pop; then I inspected the toast. I looked for even browning from edge to edge, making sure all four slices looked more or less the same on both sides. If necessary, I let the toast cool, then adjusted the settings to get my preferred level of browning. Since I was toasting on medium, I expected medium-brown results. After letting each toaster cool again, I started the second round of testing, making multiple, consecutive batches of toast. I needed to make sure the level of browning stayed consistent, batch after batch. Here are the results of those tests. 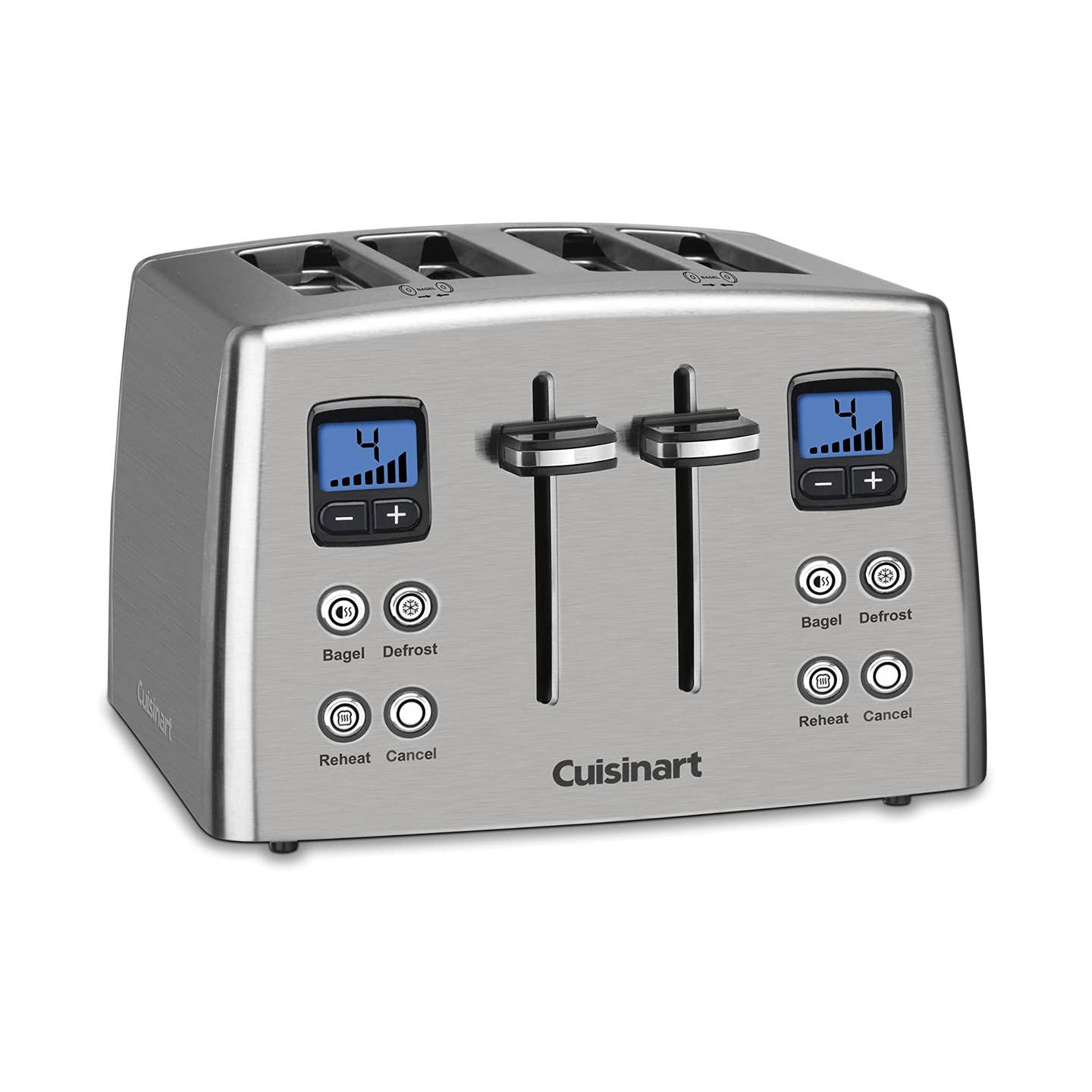 This is a really nice, sturdy toaster. It produced consistently browned toast every time, even after multiple batches. On the medium setting (4), it takes under three minutes to toast. Rather than a dial, this model uses buttons to toggle the browning levels, which range from 1 to 7. This model also features a bagel setting, a defrost setting, and a reheat setting, which I particularly liked. Look, sometimes I get distracted in the kitchen and neglect my toast (sacrilege, I know), and this little button helps me warm it back up without adding color. The entire body of the toaster is brushed stainless steel, giving it a sleek but solid feel. The only downside to that all-metal construction is that the outer casing can get quite hot, especially after making multiple rounds of toast, so it’s best to keep it out of reach of little hands. 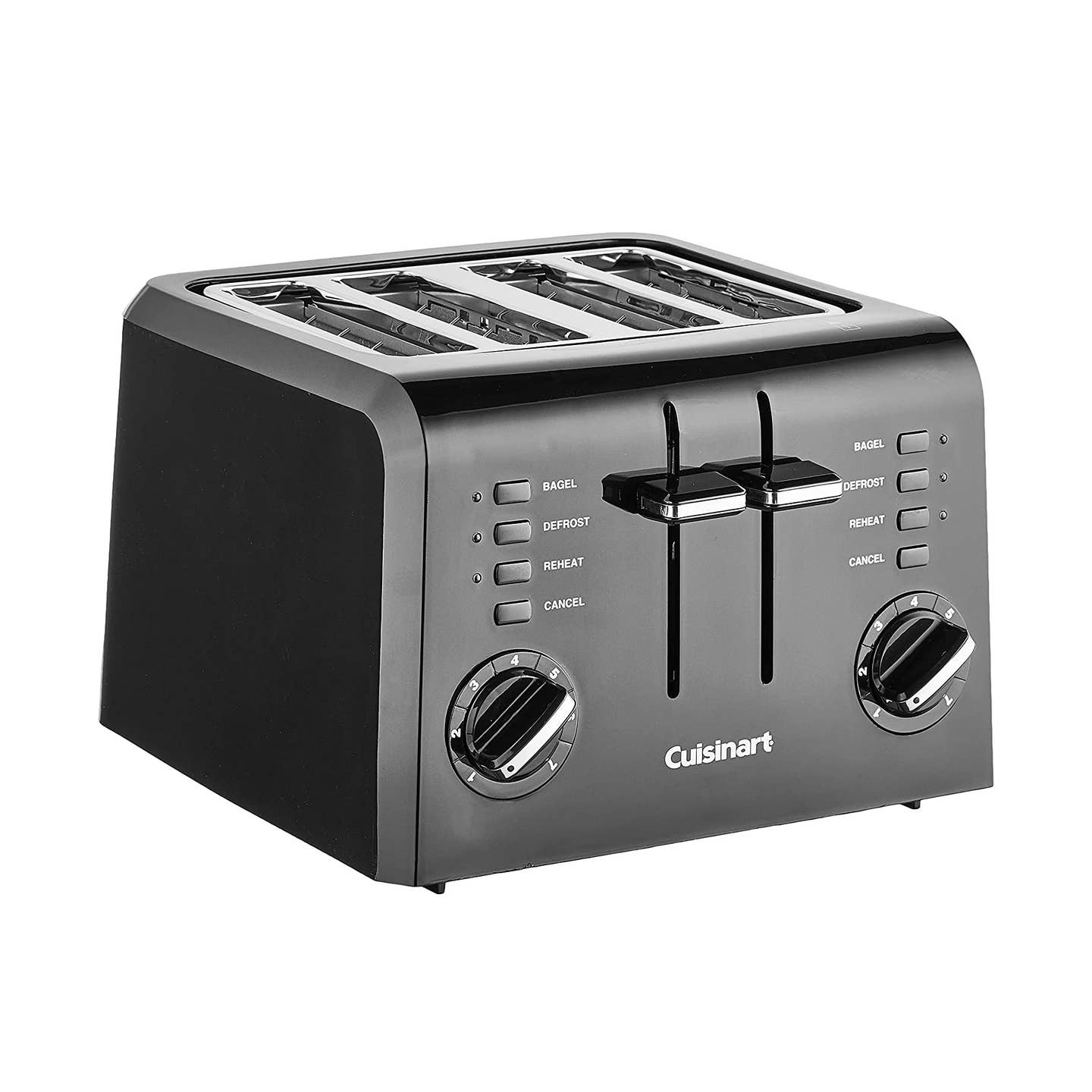 At the time of publishing, this model is about $30 cheaper than my Best Overall pick, making it a great value. It performed almost as well, though I found I had to use a higher setting to achieve the same level of brownness, which just means it doesn’t get quite as hot as the other model. Once I adjusted to level 5 of 7, it produced consistently golden-brown toast, even in consecutive batches. The outer casing is shiny plastic, which doesn’t look or feel as nice as the brushed stainless steel, but it also never got too hot to touch. Overall, a really solid toaster, especially for the price. 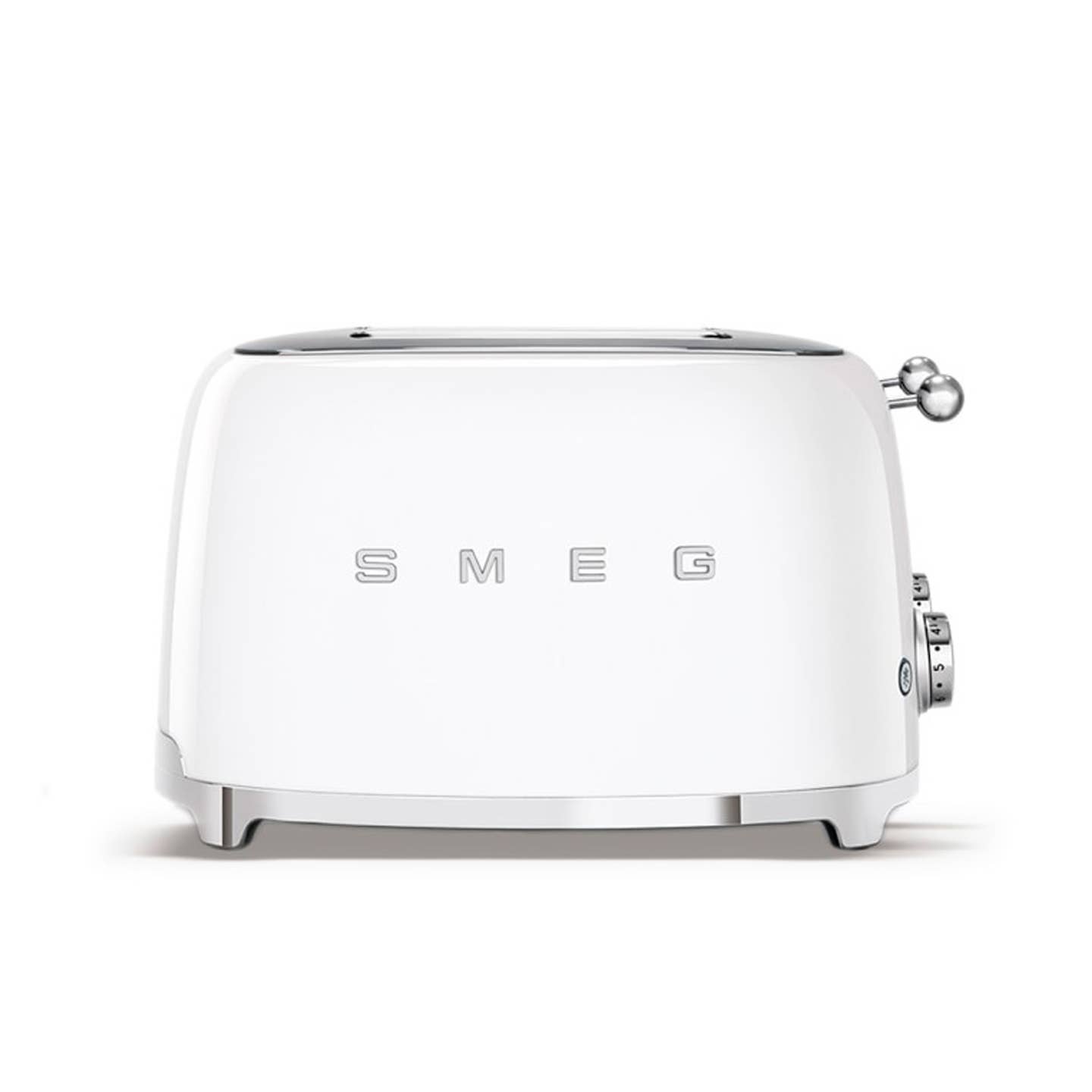 This thing is absolutely gorgeous. It comes in a variety of colors and finishes, including a really, really shiny polished stainless steel. Like all SMEG products, it has a distinct retro aesthetic that I love, but it also performed the best out of the five I tested. The dial lets you toggle the browning setting from 1 to 6, but there are also additional markings between each numeric setting so you can set it at 3, 3.5, 4, 4.5, etc. While this is technically true of any toaster with a dial, the SMEG dial actually clicks into place for each of those values. A small detail I liked: The crumb trays click into place and have to be pushed in to be released, sort of like inserting an SD card into a camera or the SIM card in your smartphone. That means the crumb tray is always secure, keeping your counter crumbless. 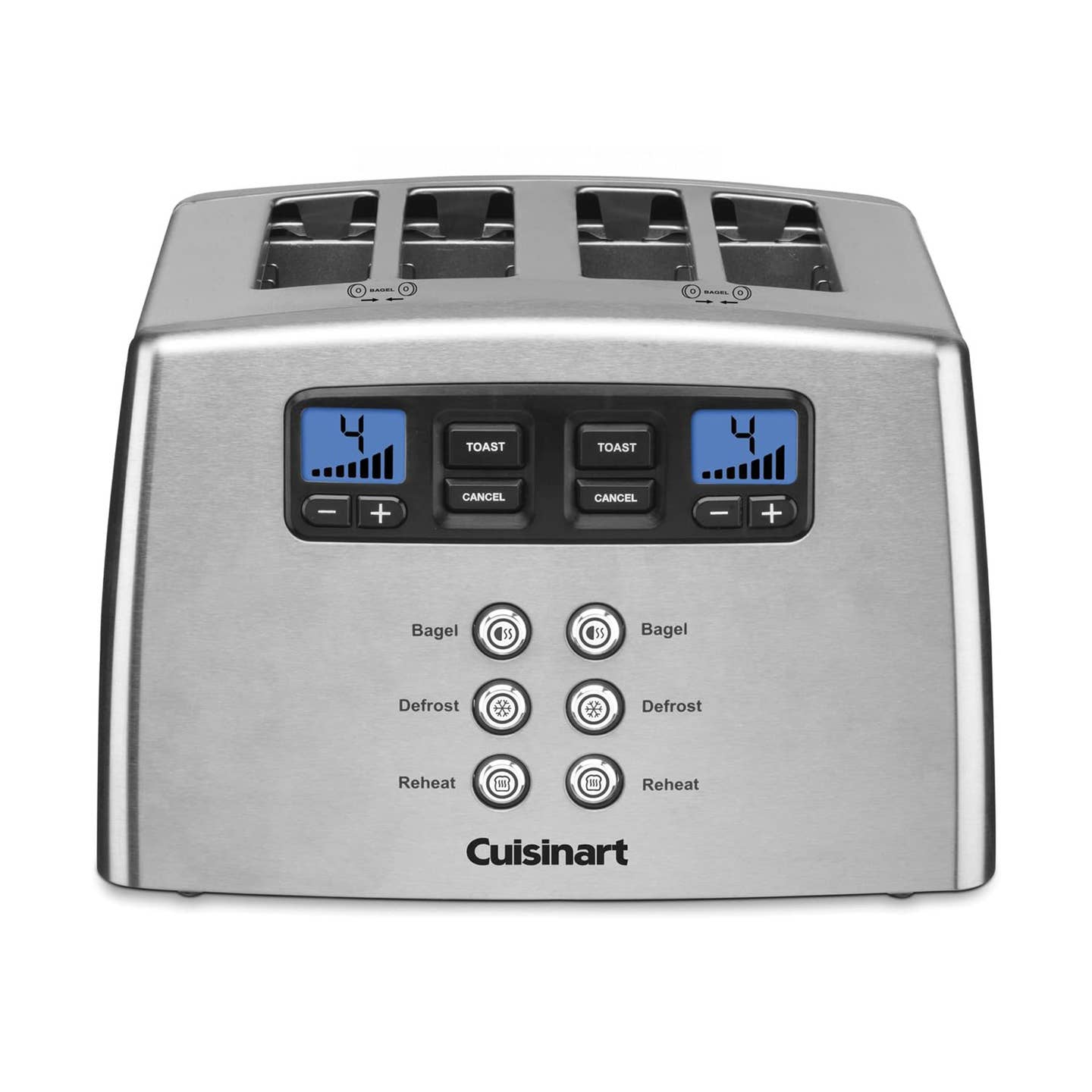 As the name suggests, this model has no levers. It is essentially the exact same toaster as my Best Overall pick, and performs about as well, except you simply load your bread and press a button rather than push down a lever. The bread is automatically lowered into the toaster, and it’s slowly raised up after the toast cycle, beeping to let you know your toast is ready. I might have been worried that the motor would be the first thing to go in this machine, but my partner’s parents have had theirs for years and it’s still going strong. While the leverless toasting is convenient, it means this model is a bit pricier than my Best Overall pick. 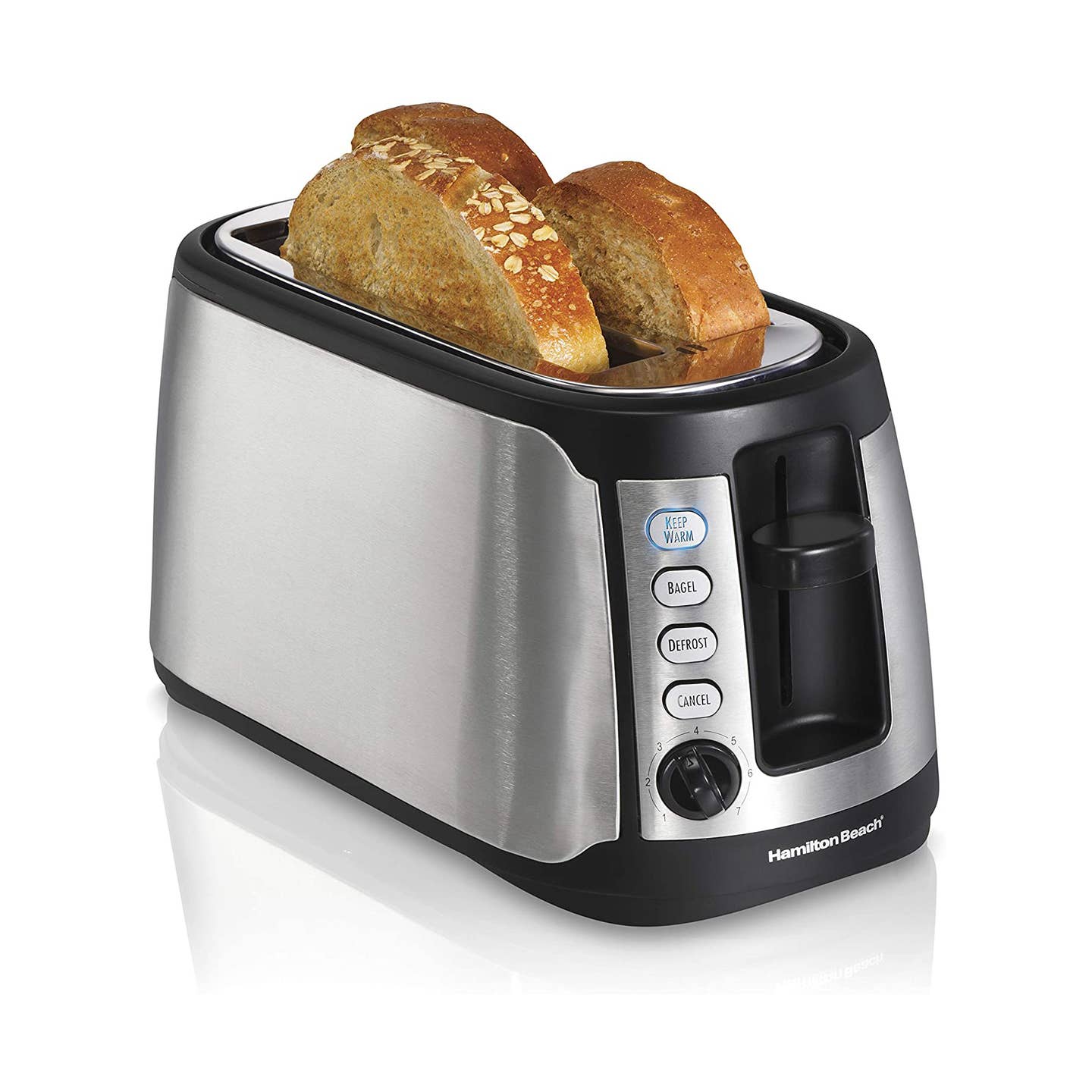 This model had the most inconsistent browning throughout all of the tests. Like my Best Value pick, it produced very pale toast on setting 4 (of 7), but when I adjusted to Setting 5, it made toast with some very dark spots with some raw, still-white spots.

As I tested, I realized that heat settings are really all over the place. Most models had a range of 1-7, with 4 being “medium,” but that didn’t always mean that setting a toaster to 4 produced medium-brown toast. I looked for toasters that heated accurately in my top picks. Bonus points went to toasters that had a “reheat” setting, which warms your toast back up while adding minimal color, as well as “bagel” and “defrost” settings.

Consistent and Even Browning

Nobody wants splotchy toast. I looked for toasters that consistently browned the most evenly over the entire (or as close to the entire) surface of the bread, even when making batch after batch of toast. If you’re toasting for a crowd, you shouldn’t have to adjust the heat settings after each round!

Not all bread is sliced equally! Plus, sometimes a boy needs his bagel. I looked for toasters that could accommodate thick slices of bread, and bagel halves, without getting jammed. As for lifting mechanisms, you should never have to reach into the toaster and risk burning your fingers while retrieving that golden-brown toasty goodness—fortunately, none of the models tested forced me to do that.

Q: How should I decide on a two- or four-slice toaster?

It all depends on your needs! In our house, everyone wakes up at different times, so we don’t always need a four-slice toaster, but it’s nice having it on the weekends when we toss together a brunch and need to toast in bulk.

Q: What’s the best way to clean a toaster?

From what I’ve seen in the instruction manuals, it looks like a damp cloth is a way to go for cleaning the body of the toaster. Pull out that crumb tray often and give it a good wipe over the sink to help prevent that burning smell.

I’ve spent a week thinking about toast, which is considerably more time than I ever expected to dedicate to something so benign. But there’s something to be said for our morning rituals. Mine usually includes coffee and toast, and being able to prepare both of those things consistently helps set the tone for my day. However passionate you are about toast, whether passively disinterested or fight-people-on-the-internet-level fanatic, I hope this guide helps you start your mornings right. Now, if you’ll excuse me, I need to figure out what to do with over 100 slices of old toast.