The magic of a carbon steel pan stands in its ability to replicate the best of both a cast iron and nonstick skillet. Unlike typical cast iron, however, it's lightweight and heats up quickly. When seasoned properly, it becomes nonstick—and even more so over time. Many professional chefs and home cooks alike rely on its high heat retention to sear, fry, sauté, and even bake a range of fare, from steaks and tofu to the silkiest scrambled eggs.

Mike Friedman, partner and executive chef of Washington D.C.'s The Red Hen and All-Purpose, swears by this type of cookware, proclaiming he uses it “almost exclusively” in his kitchens. “Carbon steel pans are a workhorse piece of equipment for any restaurant [because] they provide long-range durability and they wash easily,” he explains.

Now that it is more mainstream, the options are seemingly endless. We’ve rounded up the seven best carbon steel pans according to expert recommendations, from a pre-seasoned under-$30 find to a perforated design for your next cookout. 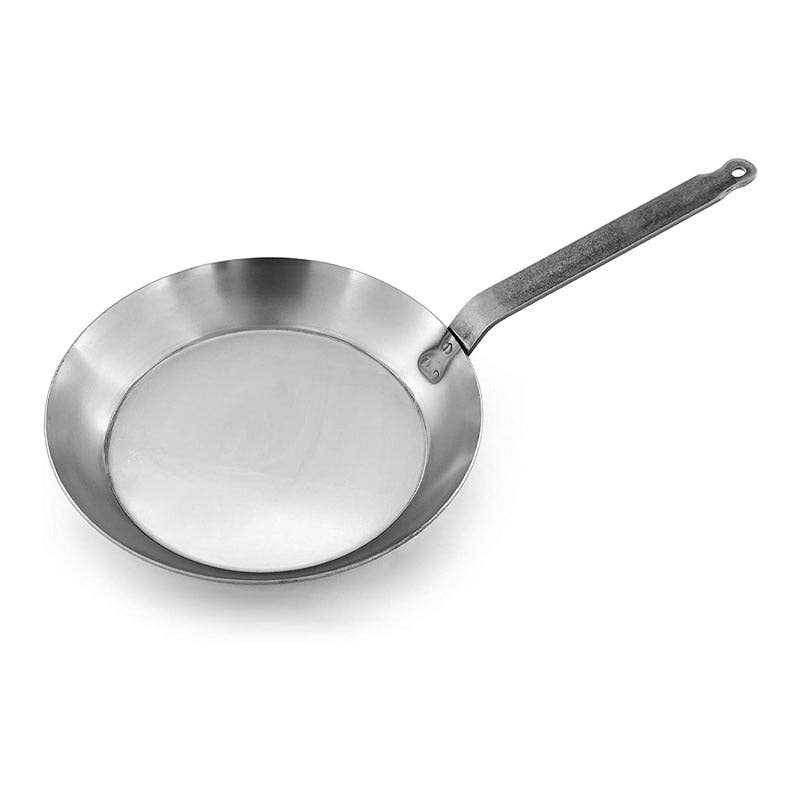 For shoppers searching for a pan that truly combines the best of both nonstick and cast iron, the Matfer Bourgeat Black Carbon Steel Fry Pan is the way to go. It’s constructed out of black carbon steel and once seasoned, it’s just as slick as the average nonstick pan. The Matfer is plenty durable, too, with a steel handle welded onto the body, making it sturdy enough to shake, flip, and toss while cooking. Plus the skillet’s heat distribution is excellent, enhancing its ability to sear and brown meat. 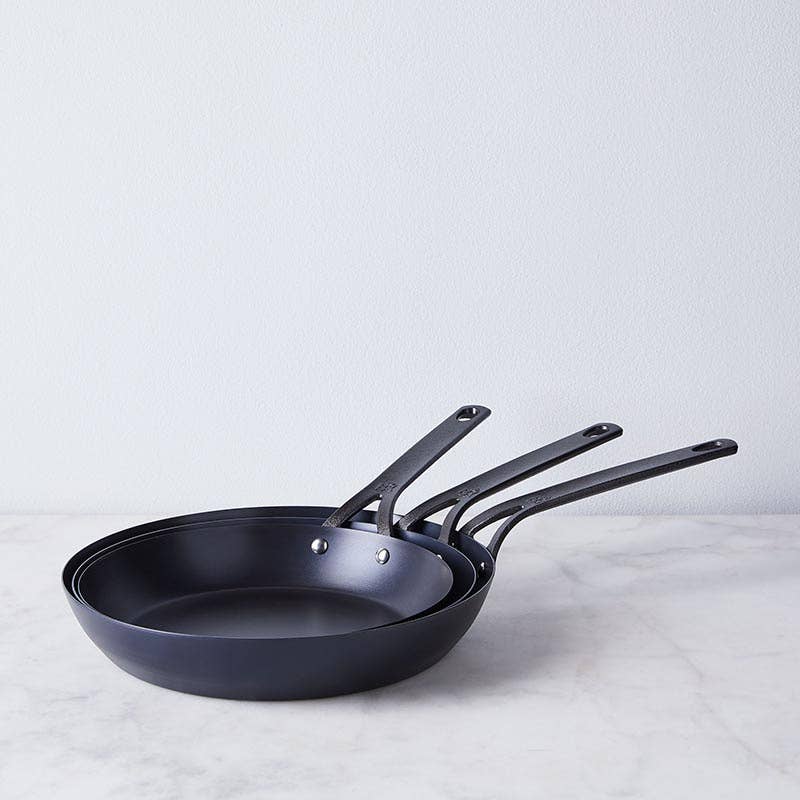 Carbon steel pans can get expensive, but quality Dutch brand BK offers a top-rated option for just $29.99. The pre-seasoned 8-inch pan is particularly lightweight, making it perfect for quick jobs like sautéing onions. Plus the surface is sturdy enough to endure metal utensils. The best part? It’s a breeze to clean: Just rinse it with hot water and use a non-abrasive sponge to scrub any leftover bits away. 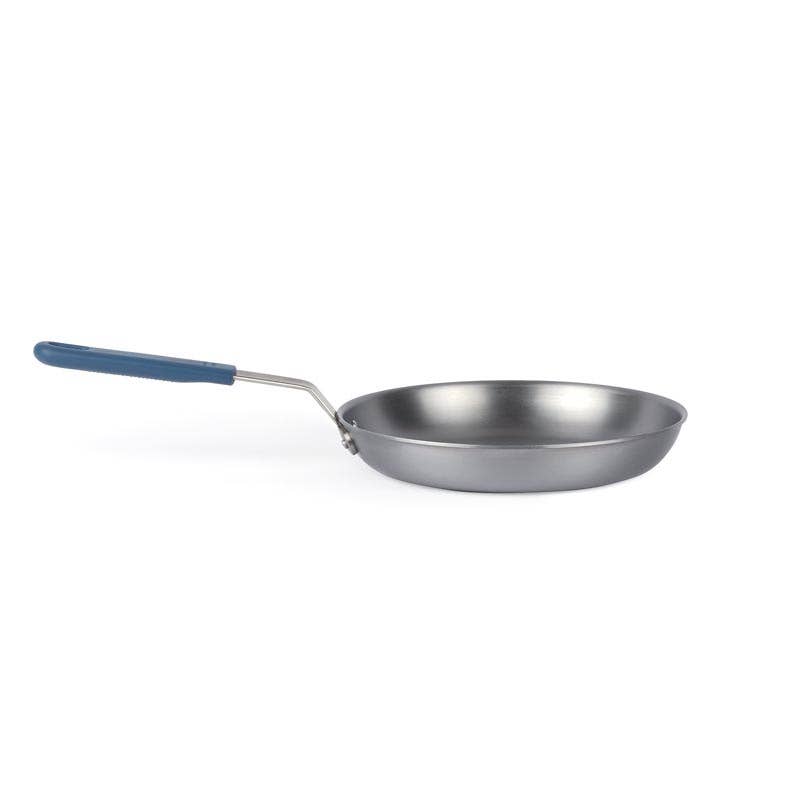 Unlike many pots and pans, the Misen 10-Inch Carbon Steel Pan can be used both in the oven and on top of the stove, doubling the number of tasks it can tackle. Plus, it’s compatible with gas, electric, and induction burners. Reach for this pan to bake, sear, sauté, and fry with ease; the pre-seasoned surface will only become more nonstick over time and is backed with a lifetime guarantee. 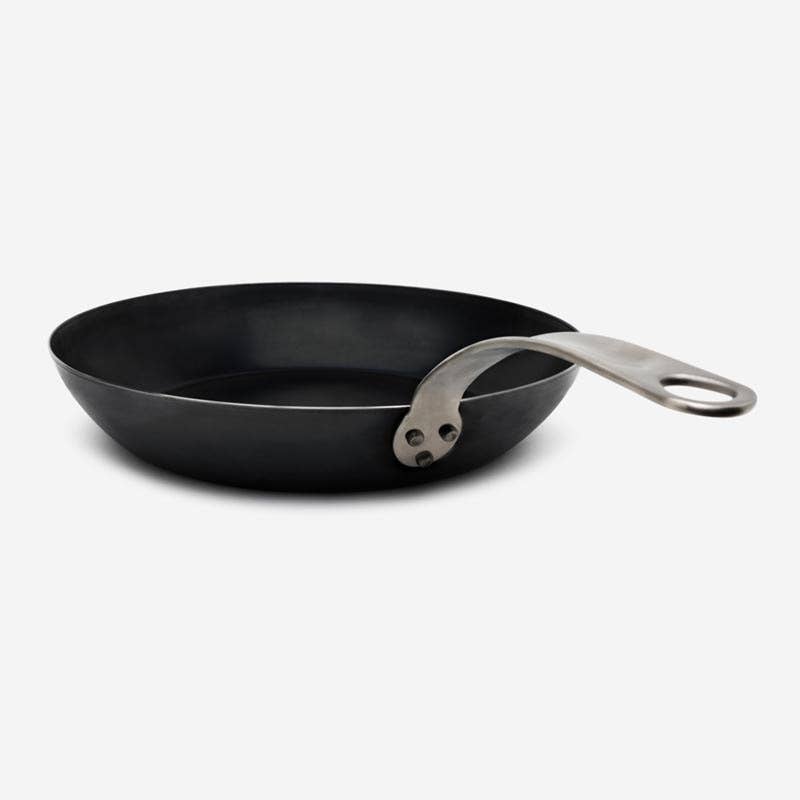 Made In’s Blue Carbon Steel Frying Pan pan boasts the same heat retention, seasoning, and nonstick properties as cast iron, while delivering stainless steel’s control, feather-light weight, and speed. You’ll no longer have to choose between hauling out a cast iron skillet or sticking with a stainless steel pan: with the Made In frying pan, you’ll be able to perfectly sear meat and effortlessly usher in fluffy scrambled eggs. 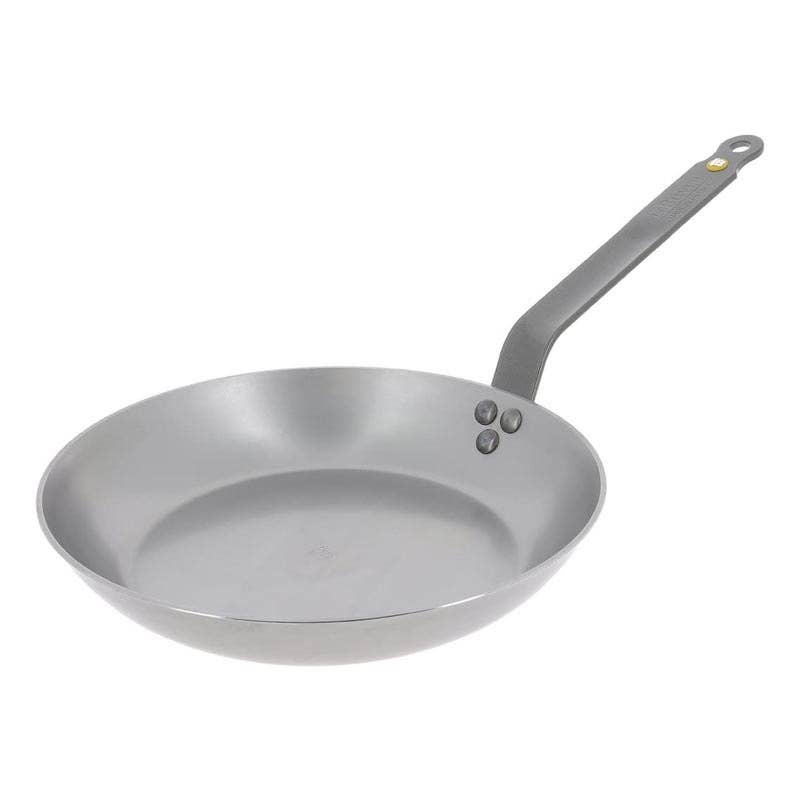 If you’ve grown to appreciate the high sides of a Dutch oven, this is the style for you. The French-made skillet has tall, slightly curved sides, which prevent oil from splattering and enhance the ability to sauté, flip, and stir. Each pan is complete with a protective beeswax finish that’s free of chemicals like PFOA and PTFE, but it will need to be seasoned to create a nonstick coating. 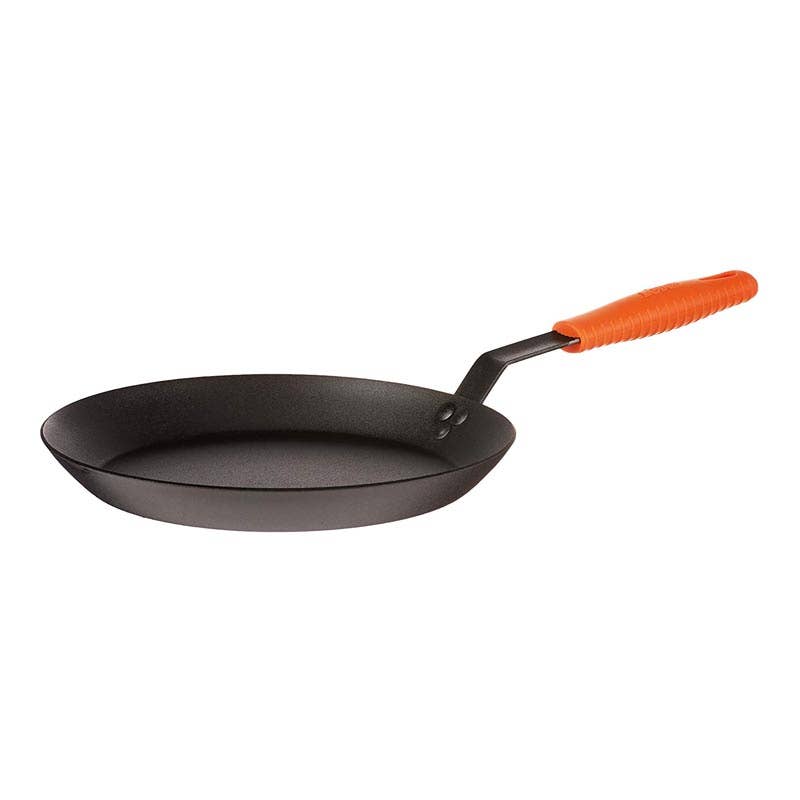 Lodge may be known for crafting top-notch cast iron products, but the Tennessee-based company is expanding their offering into carbon steel. Unlike a typical cast iron pan, it has a comfortable, riveted handle that’s wrapped in orange silicone to protect fingers from temperatures up to 500 degrees Fahrenheit. Plus the pan comes pre-seasoned, so its easy-release finish is ready to use straight out of the box. 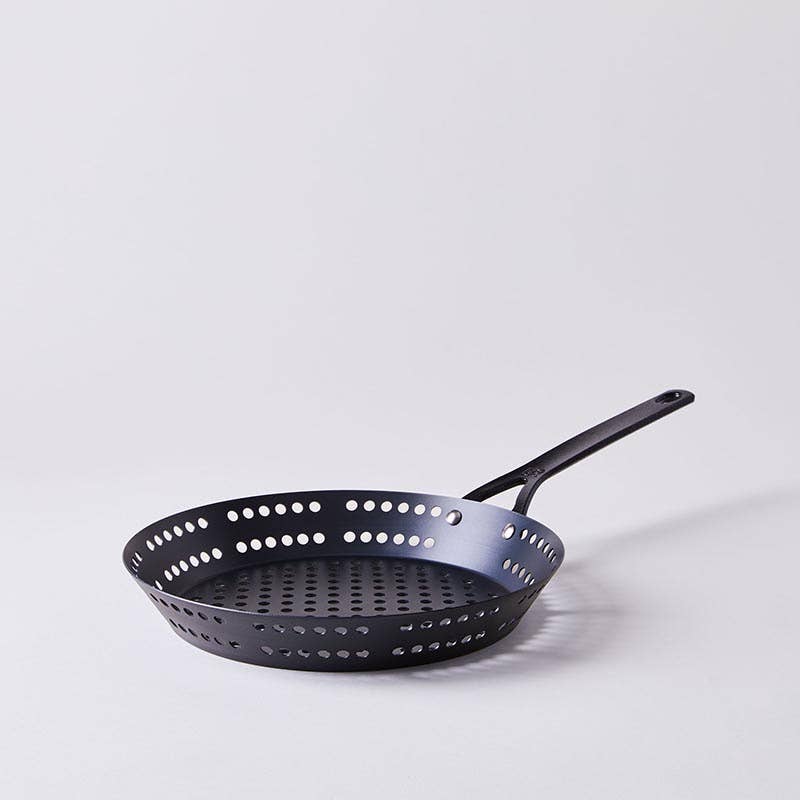 Carbon steel pans aren’t simply limited to indoor use. In fact, BK has designed an option that can be placed over a grill to tackle everything from meat and fish to vegetables and fruit—and anything else you throw on the burner. It’s been constructed with a perforated base that prevents pieces from falling through, all the while letting excess juices drip away. Plus, the pan boasts a sturdy cast iron handle, so you won’t have to worry about it melting from the scorching temperatures.

Carbon steel is often compared to cast iron, and rightfully so—both are made from iron and carbon. But while cast iron is forged from pure iron alloyed with over two percent carbon, carbon steel is made from an alloy of iron and less than two percent carbon. This makes it much more lightweight and quicker to heat up than a typical cast iron skillet. And once the skillet has been properly seasoned, it will become as slick as Teflon, making it an ideal alternative for any tasks you’d typically use a nonstick option for.

These pans are featherweights compared to heavy cast iron skillets and enameled Dutch ovens (a carbon steel pan is often half the weight of its cast iron counterpart), with similar heft to a standard stainless steel or nonstick skillet.

Carbon steel heats up quite quickly—and stays hot—making it a great option for searing large pieces of chicken and getting that perfect browning on huge cuts of steak.

How do I season my carbon steel pan?

“The best way to season a pan is to just cook in it!” says Mike Seely, Executive Chef of Bayberry Garden in Providence, RI. “To get the initial patina, heat up some neutral oil over medium heat and add a sliced onion and a half a cup of kosher salt,” he explains. “Move the onion around the pan frequently and up the sides to get all of the surfaces of the pan scrubbed. As the onion browns, the pan will start to turn dark as well. Once the onion is pretty much black and the pan is uniformly brown, discard the contents and let the pan cool on its own. Wash it quickly with warm soapy water and return to the heat to dry the pan out. Wipe it with a little oil and you're good to go.”

Can I use a carbon steel pan on any cooktop?

“As a matter of fact, you can use a carbon steel pan on any cooktop,” explains Christine Lau, Executive Chef of New York City’s Kimika. “I think people don't know [that] cast iron and carbon steel can be used on gas, electric, and even induction burners—three in one!”

How do I get the rust off my carbon steel pan?

“Make sure to never soak it in water, only wipe down with a bit of water––a touch of soap is okay, should you need it––and if you get a little bit of rust, use a metal chain pad or a dry burgundy scouring pad to remove the spots,” says Michael Poiarkoff, Executive Chef and Culinary Director at The Maker in Hudson, NY. “Make sure to protect your investment by rubbing it down with a bit of oil after every use. If you treat this pan with the same amount of love it was made with, you'll get at least a lifetime of use out of it.”