Flat top grills, once reserved for professional kitchens, are increasingly finding their way into the backyards of homeowners joining or in some cases replacing the classic barbecue grill. With their versatility and low maintenance design, there’s good reason to sacrifice those sought-after grill marks you can only get with a traditional grill.

Unlike the slatted grates of a charcoal or gas barbecue, a flat top grill has a smooth solid cooking surface that allows you to grill foods you’d never dream of throwing on the barbecue, including pancakes, eggs, stir fry, and chopped veggies. Of course, you can also grill steaks, burgers, chicken and other standard Fourth of July fare on a flat top.

A flat top grill is also easier to clean. Since the surface is smooth, drippings drain conveniently into a tray that you can remove and dump after cooking, keeping the grill’s underbelly free of the grease and charred food bits that collect in the cook box of charcoal and gas barbecues. If you’re looking to add a flat top grill to your outdoor cooking arsenal, here are some of the best options. 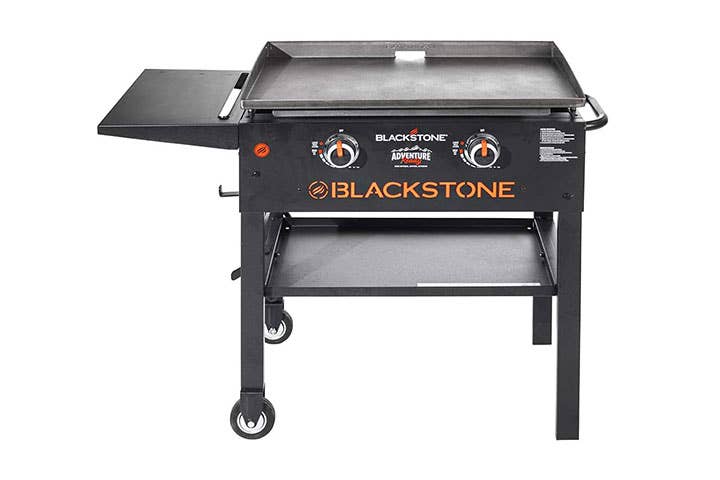 Why we chose it: The broad cooking surface and well established brand name make this one of the best all around flat top grills we could find.

Most flat top griddles are space hogs, which won’t do if you have a small deck or patio or you’re pairing a flat top grill with an existing gas or charcoal barbecue. This 2-burner model gives you enough grilling surface for cooking multiple foods—hamburgers, veggies, hotdogs—simultaneously while still maintaining a compact profile. It measures just 21 inches by 13 inches, and it comes equipped with wheels, so you can maneuver it into a corner when not in use.

With its two burners, it’s also possible to create the two heat zones you’ll need for simultaneously cooking different types of foods. There are other features to like about this grill too, including a side table for prepping food and a shelf where you can keep your spatulas and tongs. 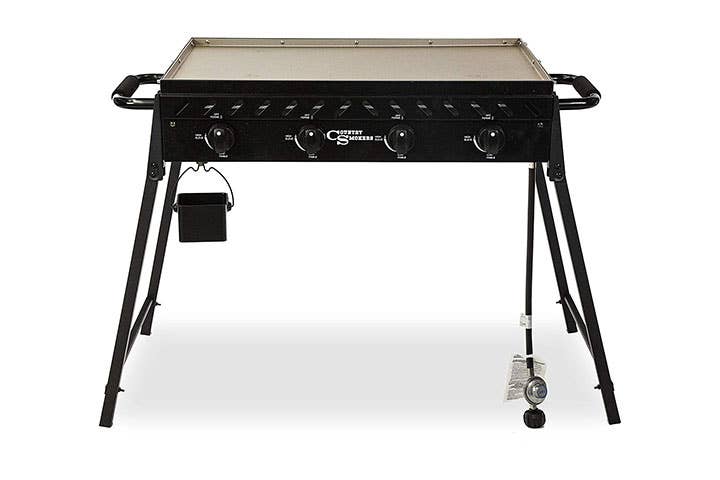 Why we chose it: The Country Smoker flat top griddle is a great option if you don’t want to spend a lot of money on another outdoor cooking appliance.

Its nearly 600 square inches of cooking surface gives you ample space for grilling hamburgers, veggies, or assorted breakfast items all at one time, which you’ll be able to do thanks to the four burners that let you create multiple heat zones.

The legs are a bit spindly, making it less stable than other grills. However, they do fold into the base, making it easier to store if you have limited space on your deck or patio. At just under 50 pounds, it’s just lightweight enough to take on the road for the next tailgating event or family reunion picnic at the park. 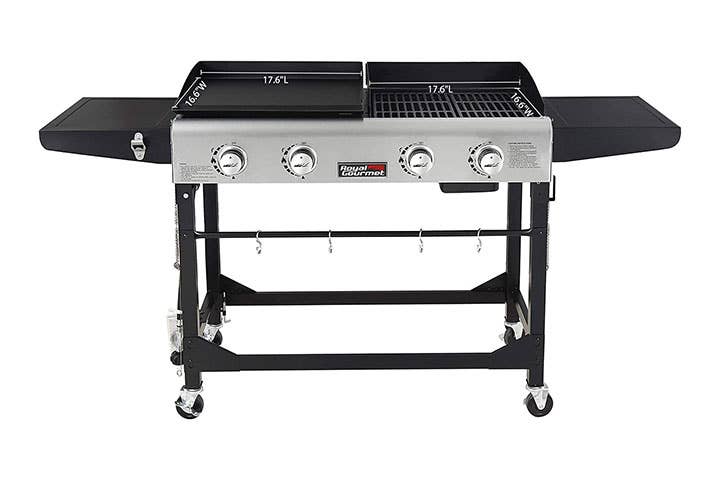 Why we chose it: If you can’t decide between a standard grill or griddle, you can get both with this combo option.

If you want a griddle and a grill but don’t love the idea of crowding your deck or patio space with multiple outdoor cooking appliances, then this combo unit from Royal Gourmet is the way to go. It comes equipped with both a griddle side and grill side that offer a total of 584 square inches of cooking surface.

With two burners on each side, you create multiple cooking zones on both grill and griddle. We also love the two large side tables, which provide plenty of space for food going on or coming off the grill. Though this grill griddle combo gives you the best of both worlds, at 66 inches wide it does demand a good chunk of patio or deck real estate. 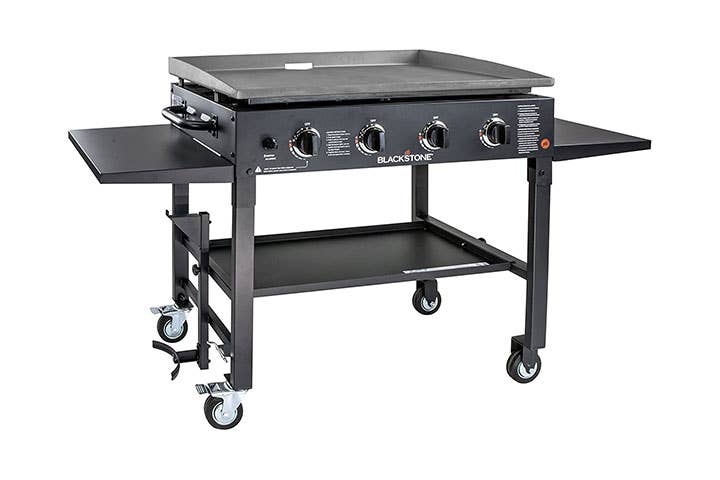 Why we chose it: its large cooking surface and four burners makes it capable of cooking a lot of food at once.

A professional flat top grill gives the chef ample cooking space and multiple heat zones for cooking a lot of food at once. You can do just that with Blackstone’s largest flat top, which comes equipped with a vast cooking surface that covers more than 700 square inches and comes equipped with four burners.

We also like the thick cold rolled steel cooktop, which distributes heat evenly while being easy to clean. The griddle is large at more than 5-feet long, and the side tables do not fold down. However, there are casters on all four legs that allow you to roll into an out of the way place when not in use. 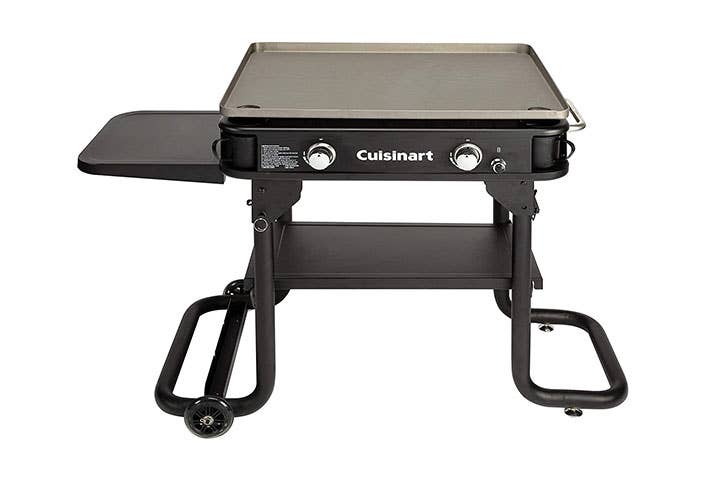 Why we chose it: This portable griddle offers as much cooking surface as a standard flat top grill

A portable flat top grill generally has limited cooking surface, which isn’t ideal if you need it to feed a large gathering of tailgaters or the extended family at a campground. Cuisinart manages to make this gas griddle portable while still offering substantial cooking space and two burners.

That’s all thanks to its collapsible design—the Cuisinart’s legs and side table fold underneath it for transport, giving it a relatively compact size of 28 inches wide and 17.5 inches high. While you’ll still need two people to lift it—it weighs 50 pounds—it’s certainly small enough to fit into a car trunk. In addition to being a great portable flat top, the Cuisinart is also a great option for those who want to store their flat top grill when it’s not in use. 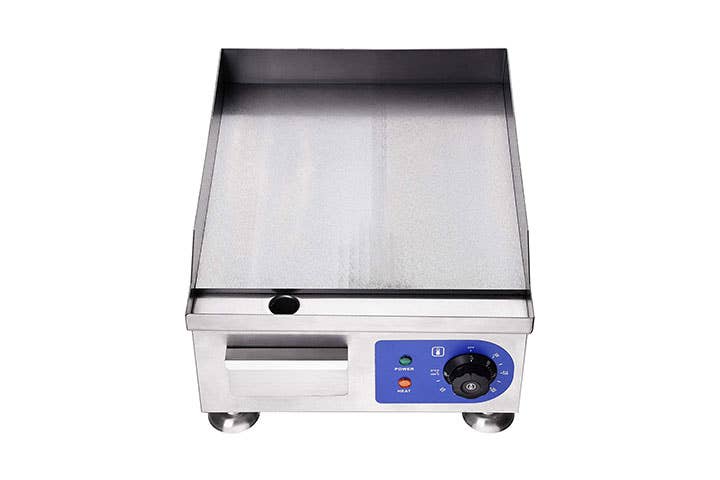 Why we chose it: A cast iron cooking surface and ability to reach high heats makes this one of the highest performing indoor griddles we could find.

While there are many indoor griddles to choose from, if you’re looking for something that’s going to give you similar grilling power to the griddles you’d find in a professional kitchen, this is it. It can heat its modest 200 square inches of cooking surfaces to temperatures exceeding 570 degrees Fahrenheit, plenty of heat for searing a dark crust on your smashburgers.

We also love the cast iron cooking plate, which holds up much better than the nonstick cooking surfaces found on many indoor cooking griddles. The Yescom does cost twice as much as other indoor models, but if you want a serious indoor griddle, it’s worth the additional cost.

Having used a variety of flat top grills of various sizes, I was able to use my experience to make my selections for our list of the top models. Since heat output is key with any type of grill, I limited my selections to those that could evenly cook food by producing at least 75 BTUs per square inch of cooking surface. I also chose grills with multiple burners that allow the chef to create different heat zones for cooking different types of food at one time. My list includes both large flat top grills capable of cooking for up to 10 people as well as smaller models for portable or indoor use.

Features to Keep in Mind When Shopping for Flat Top Grills

In addition to heat output, pay attention to the number of burners, which determines how many individual heat zones you can create on the cooking surface. The ability to vary the temperature of different parts of the grill allows you to cook different types of food (which require different surface temperatures) simultaneously. High and low heat zones are also necessary for certain styles of cooking, such as hibachi, which typically requires the chef to maintain two different surface temperatures on the grill.

Heat distribution and BTU output is also key because it determines how hot you can get the surface of the grill. A high grill surface temperature is required for searing a crust on steaks or hamburgers.

By far the best surface for a flat top grill is cold rolled steel, which won’t warp under intense heat and does an excellent job of transferring heat. It can also hold up to the constant scraping of a metal spatula.

That said, cold-rolled steel is susceptible to rust, which makes it higher maintenance. You’ll need to make sure the grill is covered when not in use and treat it periodically with oil to prevent rust from forming. A flat top grill’s exterior typically comes in either a heat-resistant black paint or stainless steel.

With a grill top made from heavy cold rolled steel, it’s imperative that the grill legs are sturdy enough to hold it steady while you’re cooking on its surface. No one wants a wobbly grill while they’re pressing down on a hamburger patty. With that in mind, look for grills with sturdy legs and lockable casters. The body of the grill should also be made from heavy gauge sheet metal, which will stabilize the grill while preventing it from warping over time.

Q: What is the difference between a flat top grill and a griddle?

Most people and manufacturers use the terms flat top grill and griddle interchangeably to refer to the same thing. That said, there is technically a difference between the two. A flat top grill is the same as a standard outdoor grill, only it has a smooth metal surface as opposed to grates. The surface can be heated by either round gas-powered burners or another heat source, such as charcoal. A griddle, in comparison, has an electric heating element that runs the length of its cooking surface.

Q: How thick should a flat top grill be?

Flat top grill thicknesses vary depending on how heavy duty the grill is. A standard flat top grill for home use is typically about 1/2-inch thick. A medium duty grill jumps up to 3/4 inch thick while a professional flat top grill typically has a 1-inch thick cooking plate. A thicker grill plate takes longer to heat up, but better maintains a constant temperature once it reaches the desired heat level, key for a professional griddle that might run for hours. The thicker surface can also handle higher heat and extended use without warping.

Q: How do I make my griddle nonstick?

The key to keeping your food from sticking to the cold rolled steel cooking surface is by cleaning it thoroughly after each use and seasoning it periodically. To clean the grill, use mild dish soap. Once clean, pour cooking oil over the surface of the grill then turn the heat to medium high to bake the oil into the surface. This seasoning process creates a protective coating that not only keeps food from sticking to the surface but also prevents scratches and rust.