Named for a small town in Thailand, created by a Chinese immigrant from Vietnam, and made in California, Huy Fong Foods’ Sriracha became the standard hot sauce for anyone eating Southeast Asian food in the United States in the 21st century. Vietnamese American food writer Andrea Nguyen holds a theory as to why that is: “It has the texture of ketchup.”

When David Tran started making the famous “rooster sauce” in the U.S. in 1983, few other hot sauces shared the space in North America, and Nguyen notes that Tran did his best to appeal to a wide audience by using multiple languages on the bottle. It worked: its ubiquity and lack of competition in the category helped propel it to viral popularity. Tran’s Vietnamese background meant that his version of sriracha landed on the table of restaurants specializing in pho, and for many non-Vietnamese people, it became the assumed topping for the dish—a fact that makes Nguyen sigh in despair. “I find that to be an insult to the pho broth,” she says.

The way that it sits in the broth without disappearing—thanks to that aforementioned ketchup-esque thickness—appeals to Americans, theorizes Selah Kendall, an account executive at Snuk Foods. “Unlike a traditional hot sauce, which is really runny and has that vinegary kick,” she explains, “sriracha has that really nice, thick, luscious texture. So when you add it to dishes, it really feels more like a salt than a heat.”

Though it gained popularity in Vietnamese restaurants, sriracha originated in Si Racha on Thailand’s east coast, about an hour south of Bangkok. “Vietnamese food is full of rolling hills,” describes Nguyen, “whereas Thai food is full of these lusty peaks and valleys of sharpness.” Sriracha goes well with those bigger flavors, she says. If people really love the classic version of the condiment, she advises that they branch out and explore the Thai brands. “There are many versions of [sriracha],” Nguyen reminds people. “The rooster brand isn’t the only brand.”

How We Tested Them

A team of testers from a variety of culinary backgrounds tasted each sauce alone and on a selection of foods—namely noodles, eggs, and potatoes. Among the bottles that tasters enjoyed, ranking became a matter of individual preference, but when it came to the best on individual foods, the choices became much clearer.

After tasting a slew of different styles of sriracha, one conclusion stood out to us: The Huy Fong style so dominates the category in the U.S. that it served as a reference point for comparison. Tasters declared sauces “sweeter,” “saltier,” “runnier,” or “spicier,” but always used Huy Fong as the anchor.

A set of five core ingredients and a fermentation-based process define what makes a sauce a sriracha. Each sauce begins with a red pepper (type varies) that gets aged. The length of time at this step brings in a second variable to the flavor equation: Versions from Si Racha use a red chile pepper similar to tabasco peppers, explains Kendall. Milder than traditional Thai peppers, these yield a much sweeter flavor than the sriracha most Americans know. Vinegar, sugar, salt, and garlic round out the core ingredients, and the amount of each ingredient used creates the wide differences between the various styles.

The other big difference between various types of sriracha comes from whether the sauce uses thickeners and preservatives. Sauces with xantham gum or modified tapioca starch felt smoother and more luxurious on the tongue. Other sauces use MSG to boost the flavors, and many use sodium benzoate to stay fresh longer. These ingredients seemed to have little effect on the outcome of the taste test, but if you have a preference, check the bottle before purchasing. 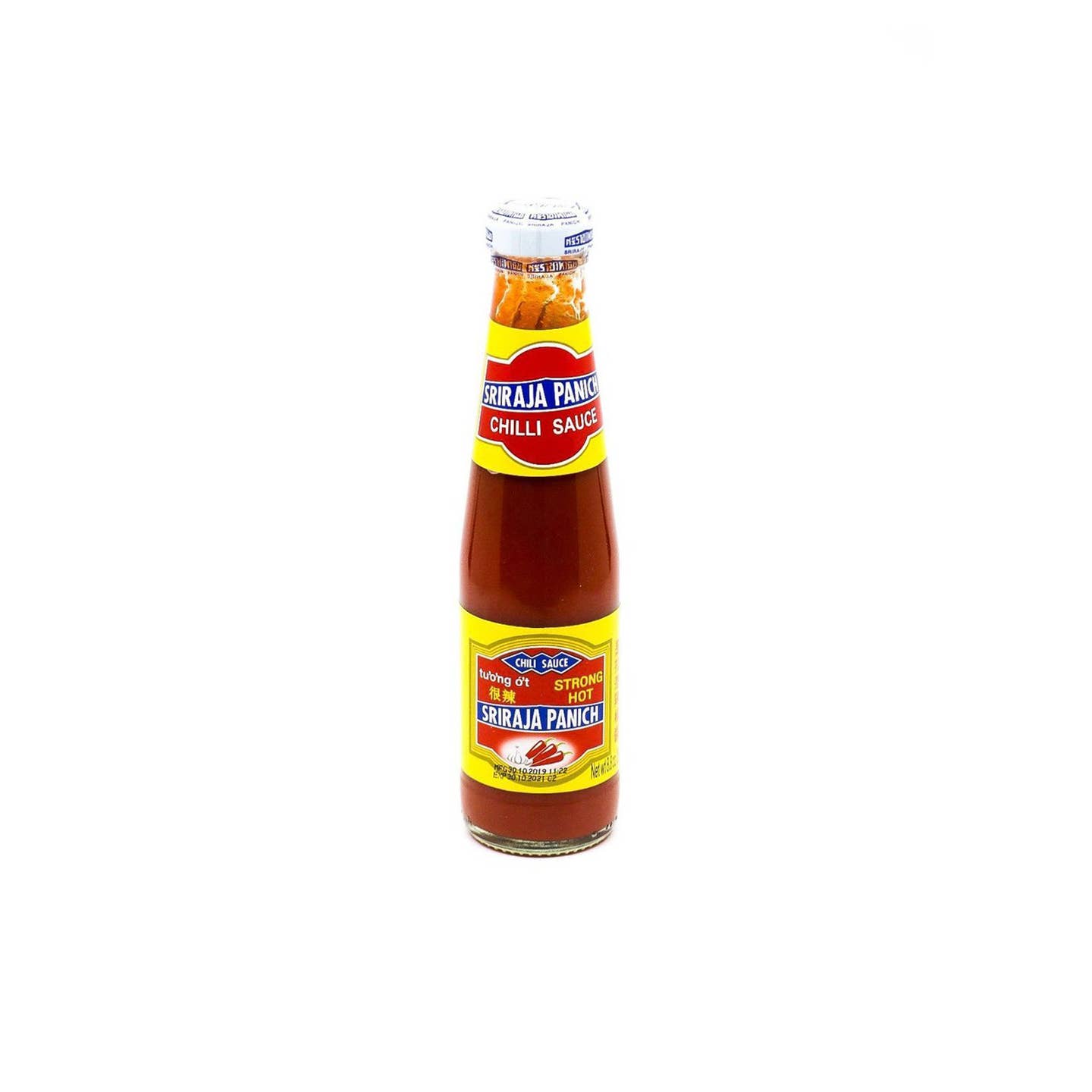 The woman who is said to have created the original version in Si Racha back in the 1930s was looking for the perfect sauce for seafood, as Kendall tells it. After more than 85 years, it’s still made entirely in Thailand and bottled there with just the core ingredients. Even without the use of preservatives, it comes out of the bottle thick and silky. It leans garlicky and sweet, and the spur peppers keep the spice level mild. As with the texture, the flavor is smooth, with fewer of those sharp peaks Nguyen mentioned earlier, and with more complexity than any of the other brands, which worked particularly well with Thai omelets. The pleasant tang and balanced flavors come from the longer fermentation process, Kendall notes. 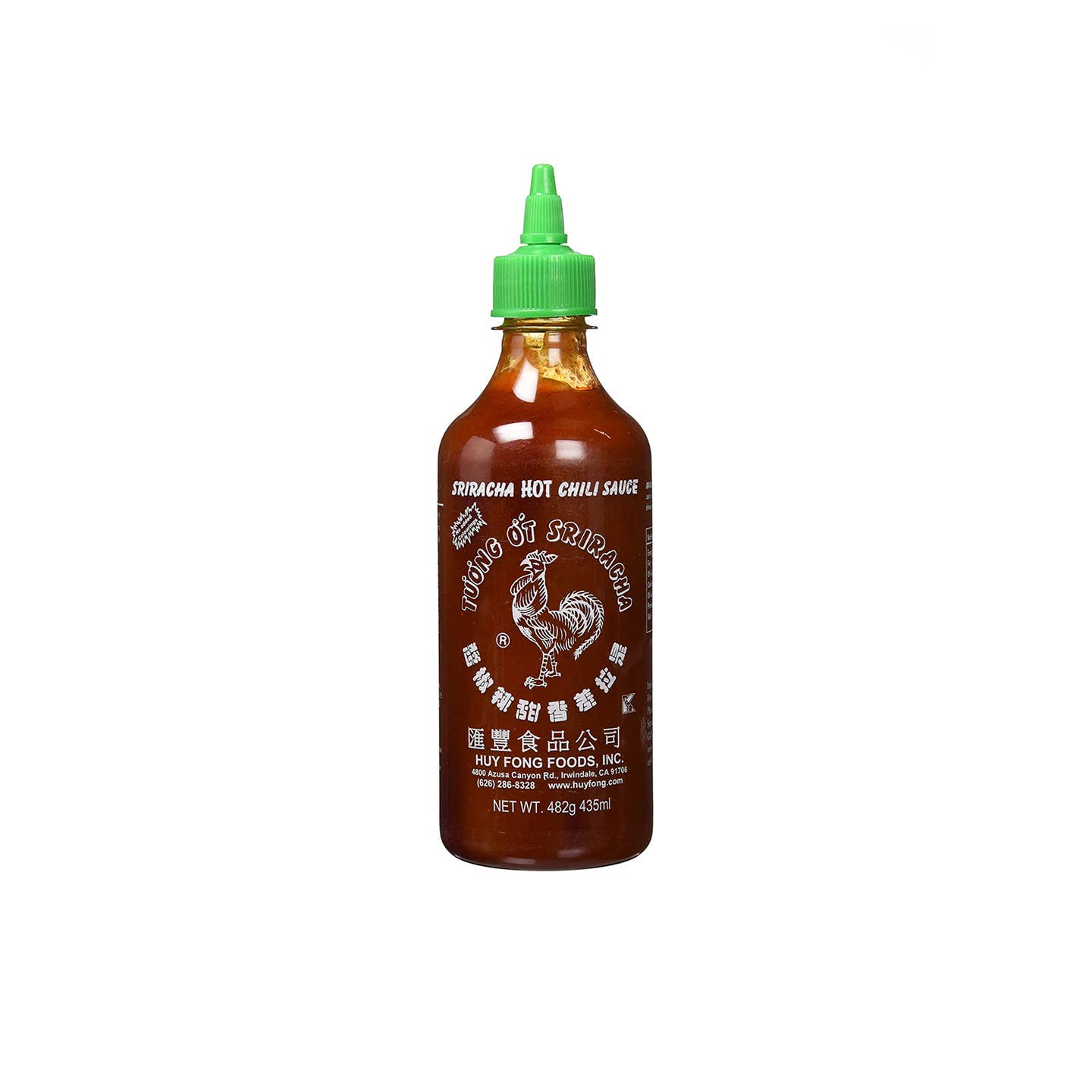 The sauce that needs no introduction fared well in the tastings, but it also left our tasters wondering whether that was out of familiarity more than anything else. “The American palate is built around this,” says Kendall of the jalapeño-based sauce. Still, it stood out in two ways: as the least sweet and the smoothest option we tried. (The smoothness comes, at least in part, from its generous use of additives and preservatives.) Without the sweetness to temper the vinegar and spice notes, it comes off sharp and bold, with a heat that lingers on the tongue. Nguyen finds it most useful when she stirs it into mayonnaise to spread on banh mi. 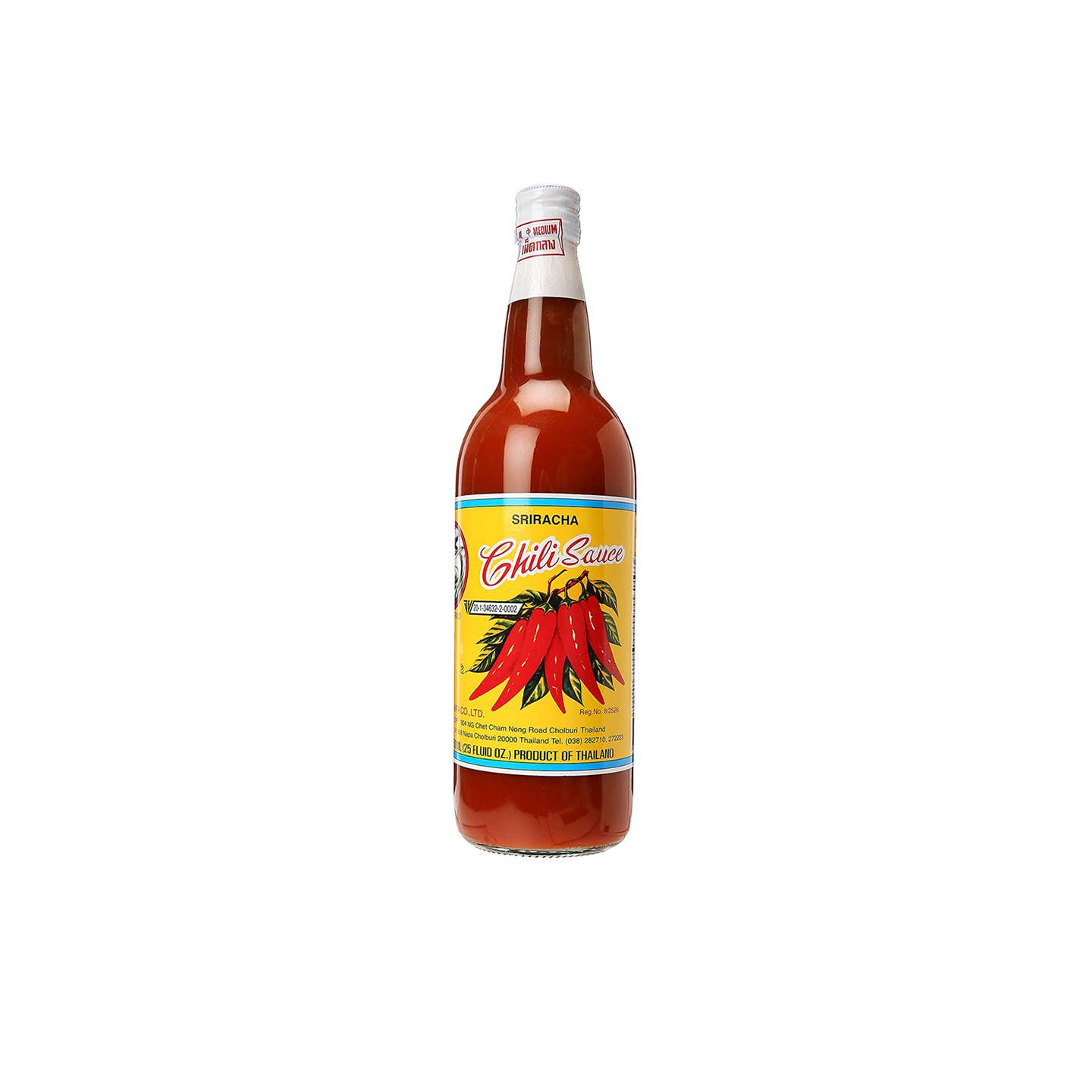 The runny texture of this sauce was a bit off-putting to our testers initially, at least on its own. But in dishes already prepared with a sauce—like noodle dishes—the thinness rarely mattered. Once this sriracha was incorporated into a dish, the brightness of the vinegar-forward sauce won praise, and the mild heat carried a strong pepper flavor, giving it a complexity that kept it among the favorites. Despite using both preservatives and a thickener, Shark Brand’s loose texture keeps it from being an all-purpose favorite, but for adding to anything where the runniness doesn’t matter—or can be an asset—it’s an essential. 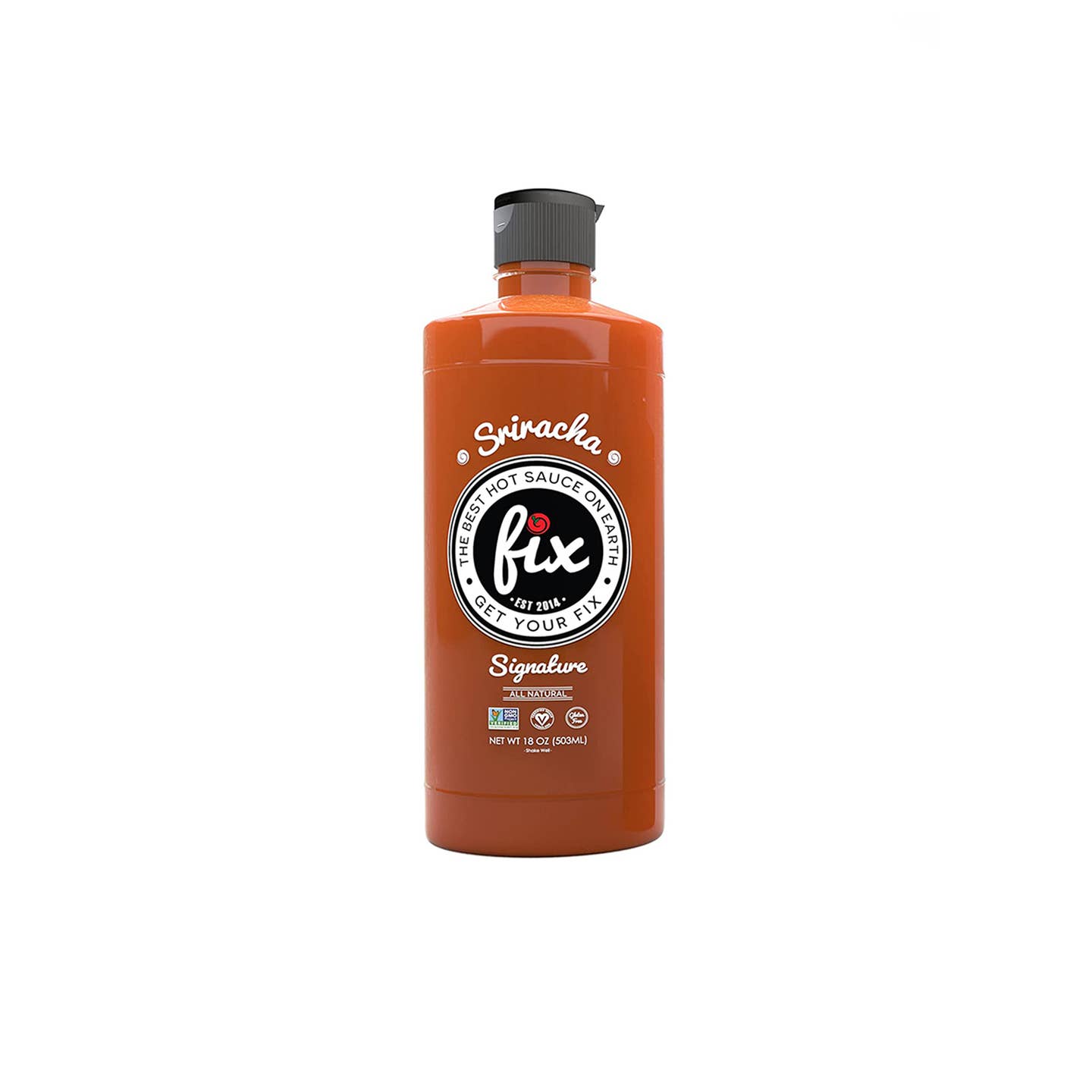 At first the unique flavor of this sauce out of Vietnam felt slightly off. It sticks only to the core ingredients, but while many srirachas use acetic acid (undiluted, unflavored vinegar), this one uses rice vinegar, and the sugar used is specified as cane sugar. The end result carries a slightly smoky, meaty flavor that deterred diners in most of the tasting applications but felt right at home in a marinade for grilling. Without thickeners, the texture leans runny, but it carries a hefty spice. Nguyen also recommends the company’s lemongrass-tinged, spice-forward green version. 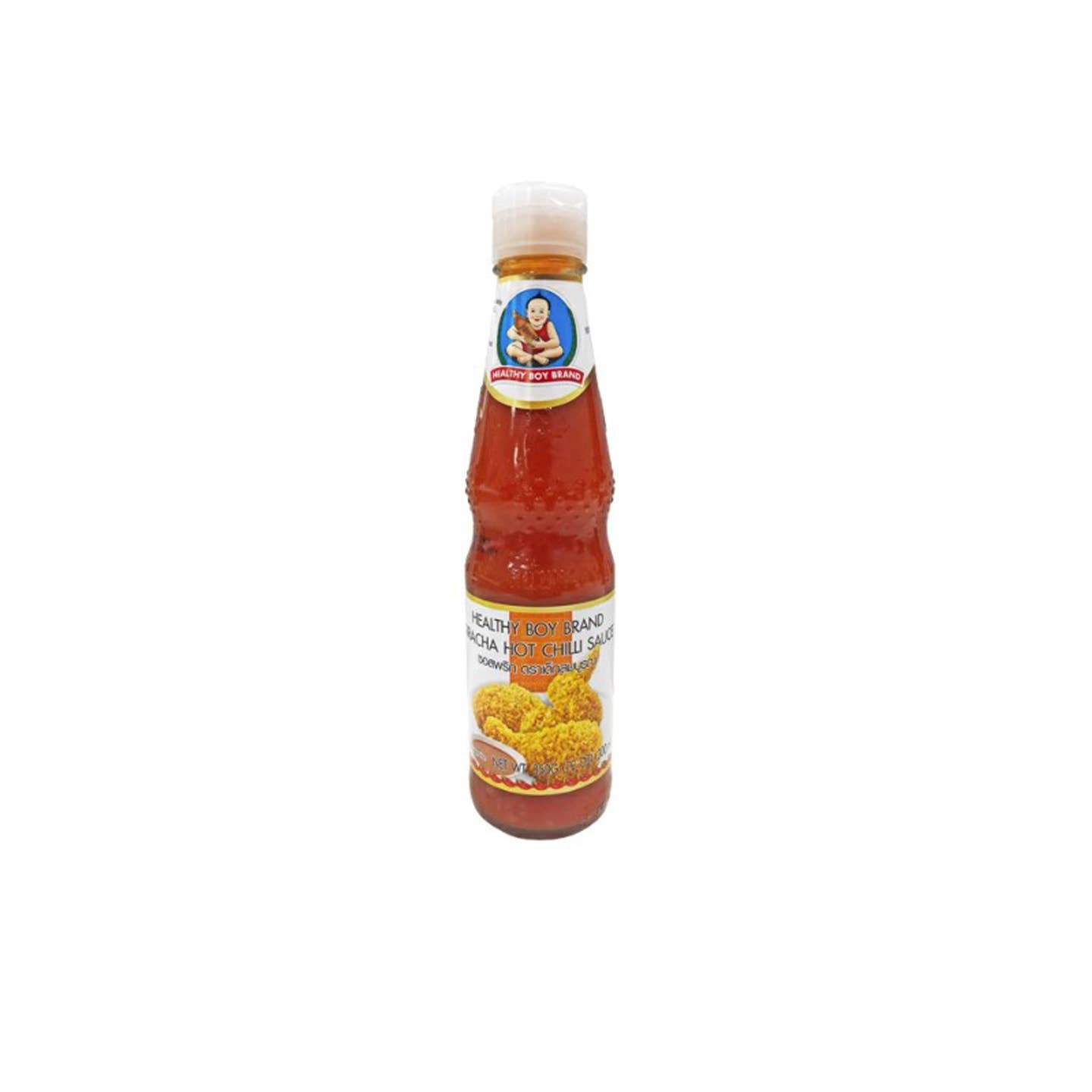 This Thai brand threw everything but the kitchen sink into its attempt to unseat Huy Fong—and it succeeded. Beyond the core five ingredients, it includes modified tapioca starch, MSG, paprika, citric acid, sodium benzoate, and xantham gum. The end result is a sauce that rivals Huy Fong’s on every level, but leans a bit thicker, with added sweetness and a little extra heat on the back end. Most importantly, though, the flavors come out much more balanced. The bottle resembles Huy Fong’s, with a small child in place of a rooster, and nearly identical copy outlining what to use it on. But the thicker texture gives it a major advantage for one of the best uses for hot sauce: dipping things like french fries or chicken wings. 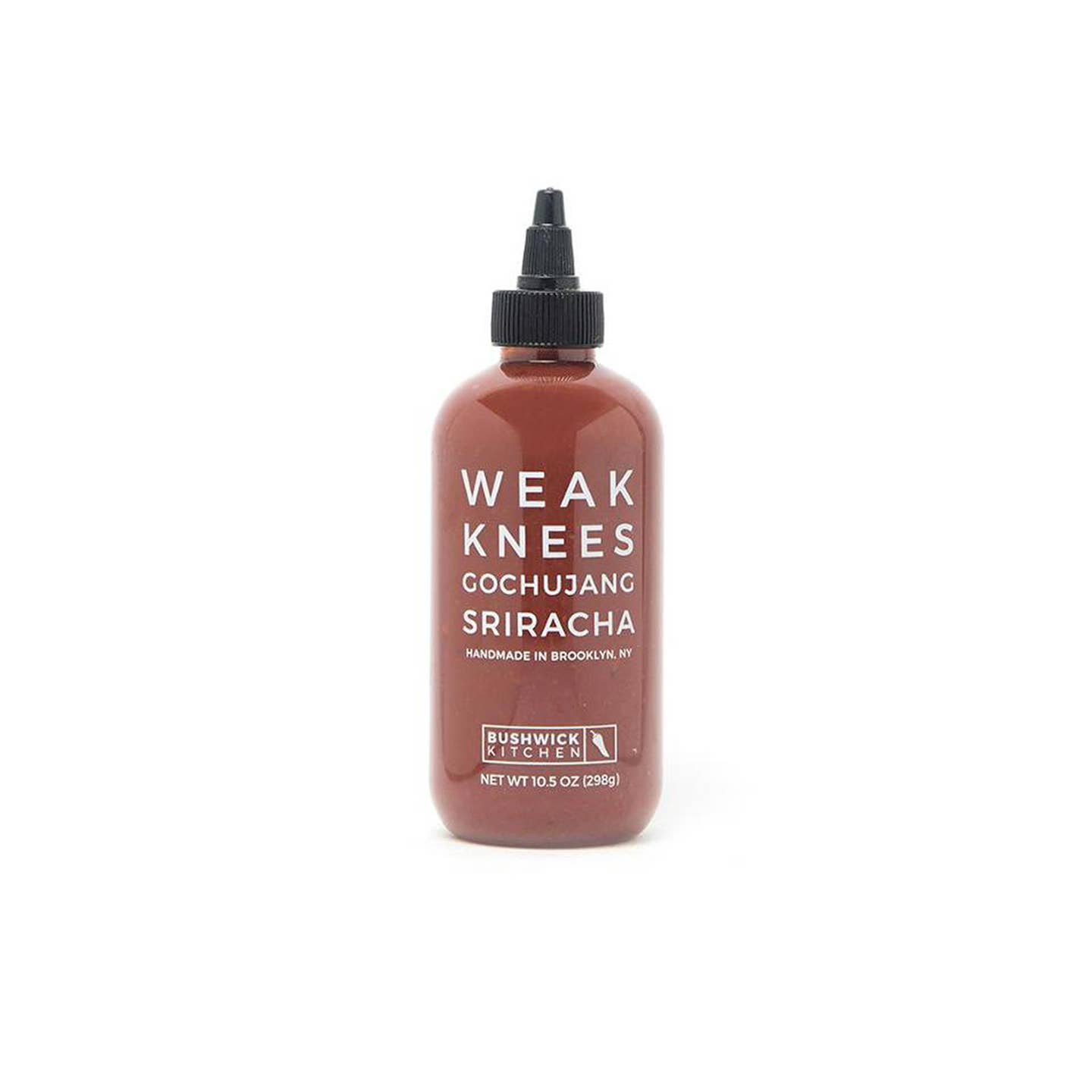 Though it felt the least like the classic sriracha, this version brought a fun new twist to the style. Instead of using peppers, the heat comes from Korean gojuchang paste, which includes tapioca syrup, brown rice, red pepper powder, salt, alcohol, soybeans, garlic, and onion. Bushwick Kitchen then added more sugar, garlic, and vinegar to give it more of the expected sriracha flavor profile. It ends up extremely mild, with a fair amount of natural sweetness from the gojuchang. Kendall recommends it for people already knowledgeable about sriracha and in search of something different. The low tang and minimal garlic flavors are accompanied by a thick, slightly grainy texture, which Kendall suggests works well in sandwiches.

“Condiments don’t live forever,” says Kendall. She recommends using any sauce without preservatives within a month or two of opening, and even the ones with preservatives within a few months. While some people believe that the darker color in older bottles of sriracha adds flavor, eventually the vinegar flavor takes over and the sauce loses any nuance it once had.

Q: Should you keep sriracha in the fridge?

Kendall notices that people sometimes keep their Huy Fong Sriracha in the cabinet, but she likes to keep hers refrigerated. Because this version uses preservatives, the label suggests that you simply “store in a cool dry place,” but Kendall feels it stays fresher when chilled. Preservative-free sauces should uniformly be stored in the fridge.

“It’s a great condiment, but it should be used with moderation,” says Nguyen, summing up much of what our taste test proved. “It should complement or supplement, not overwhelm.” With more options for which sriracha best fits the meals you cook or the way you eat, this becomes easier—you can pair the exact right version with the right flavors and dishes. But in the end, if faced with limited room or budget, you can’t go wrong with keeping a bottle of Huy Fong’s version in your fridge.