In Defense of the Olive-Drab, Slow-Cooked String Bean

Generations of Francophillic chefs have made Americans terrified of overcooked vegetables, but we weren’t always so afraid 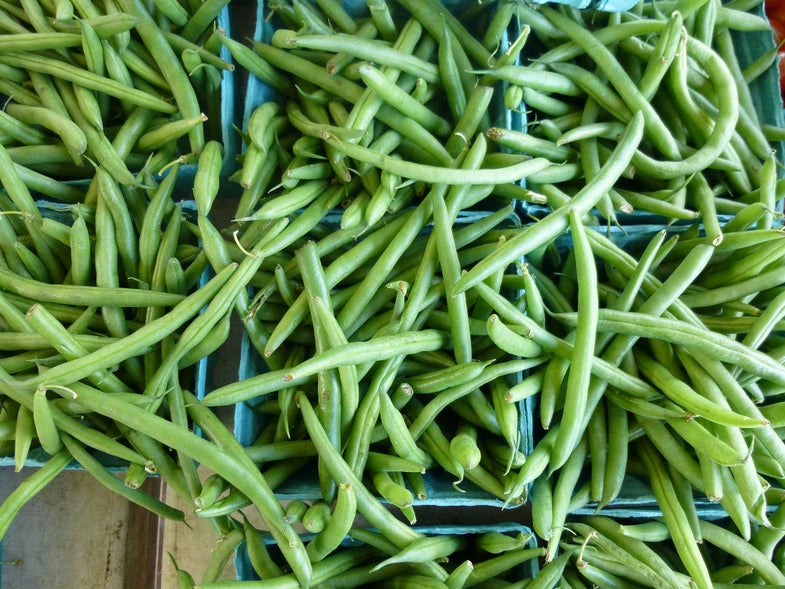 There are any number of ways to signal to the world that you just fell off the turnip truck. You can wear overalls to church or eat pizza with a knife and fork. You could even admit that you like slow-cooked green beans.

Yet at the risk of sounding like a rube, I’ll go to bat for slow cooked green beans. I’m talking an hour and a half and maybe more, along with some onions and garlic and a little smoky side meat, simmering until they are soft in texture—maybe even mushy—and swimming in hearty pot liquor.

This approach flies in the face of today’s green bean orthodoxy. Three decades of French and French-educated chefs have indoctrinated us with the idea that beans should be crisp-tender, never soft. The method touted by our food cognoscenti is to boil them for just a few minutes, shock them in ice water to preserve their brilliant green color, then reheat them in a little butter so they are warmed through but still have a firm, snappy bite.

Such a preparation would seem bizarre to cooks in previous centuries. In The Kentucky Housewife (1839), Lettice Bryan instructed her readers to boil their green beans “slowly till very tender, which you may tell by taking one out and mashing it.” Mrs. S. R. Dull’s Southern Cooking, published in 1928, insists “snap beans require long, slow cooking, two to three hours.” (Yes, three hours!)

It wasn’t just a Southern thing. The 1927 edition of Fannie Farmer’s Boston Cooking School Cook Book directs, “cook in boiling water from one to three hours.” Up in Hyde Park, a CIA instructor just got a bad case of the vapors.

The conventional wisdom about green bean texture began to shift in the 1970s, and the practitioners of “nouvelle cuisine” had a big hand in it. French chefs like Roger Vergé and Paul Bocuse rejected elaborate recipes and heavy sauces, focusing instead on fresh ingredients prepared simply—and that often meant cooking green vegetables as little as possible.

These ideas influenced the “California Cuisine” of Alice Waters and Jeremiah Tower as well as the “New Southern Cuisine” that began developing in places like Charleston and Chapel Hill. The minimalist approach to veggies made its way to the home kitchen, too, spurred on by food writers enamored with all things French.

“Beans must never be overcooked,” an uncredited writer for the New York Times insisted in 1979, in a syndicated column that ran on food pages across the country. It sneered at old-style American beans “cooked for hours with a piece of fatback into a gray, greasy gob” and claimed with Francophilic certainty that “the green bean, like the potato, had to travel from the New World to the Old World and await the cooking skills of the French before it could come into its own.”

By the mid-1980s, green bean texture had become something of a cultural marker, especially in the South, where migration and suburbanization were changing how people ate. “Yuppies” in Atlanta and Charlotte, desperate to shed all traces of bumpkinism, turned their backs on barbecue and fried chicken and started eating quiche and drinking Perrier.

There was, of course, backlash from traditionalists. The Atlanta Journal-Constitution columnist Lewis Grizzard excoriated the fancy restaurants popping up around the city in the 1980s. They “serve their green beans raw and then they cook their tomatoes,” he complained. “This is an unholy aberration I cannot abide.”

But the firm-bean sophisticates won out, even in the South. And unlike quiche, crisp green beans had staying power.

“Green beans are at their best when tender, yet crisp with a bit of crunch,” food columnist Gay Starrak wrote in 1983, advising boiling them for 10 to 15 minutes. That window grew shorter each year. By the 1990s, it was common to see recipes calling for 4 to 10 minutes of cooking, and soon a 3-minute blanch was standard. It’s now routine to see pieces like this one from Epicurious, which declares, “most people live in fear of overcooking their vegetables” and invokes the terrifying image of “green beans with no more backbone than a piece of spaghetti.”

Now, I live in fear of many things, like bears and bees and Kidz Bop. But overcooking vegetables isn’t one of them. At least not any more. Like most people who learned to cook in the ‘90s, I came of age believing that green beans should have a snap to them, and I dutifully mastered the blanch-and-shock process.

But more recently I’ve started lowering the heat and letting them go, especially when I find myself with scraps of leftover country ham or come across a smoked ham hock at the butcher counter. I add lots of onions and garlic to the pot, too. There’s something magical about the way those sharp, strong flavors meld together and transform the crisp, vegetal pods into into something silky, dark, and delicious.

This is not to say that it’s wrong to make crisp green beans via the blanch-shock-revive method. When served alongside a perfectly seared piece of fish with roasted potatoes and a citrusy sauce, they add a pleasing snap of texture and a splash of bright color to the plate.

But green beans in such a context are little more than a soulless garnish. Cooked more lovingly—which is to say slowly, with plenty of aromatics and a little smoky meat—they are transformed into a rich, hearty delicacy. They may even steal your attention away from what is nominally the center of the plate, like those dry slices of turkey breast on Thanksgiving day.

So be brave this holiday cooking season. Turn the stove to low and let that pot of beans simmer for a good long time while you catch up with family and friends. The results are worth the wait.