A spirit so good the Okinawan royal family once used it as currency, awamori does magical work in the pan. 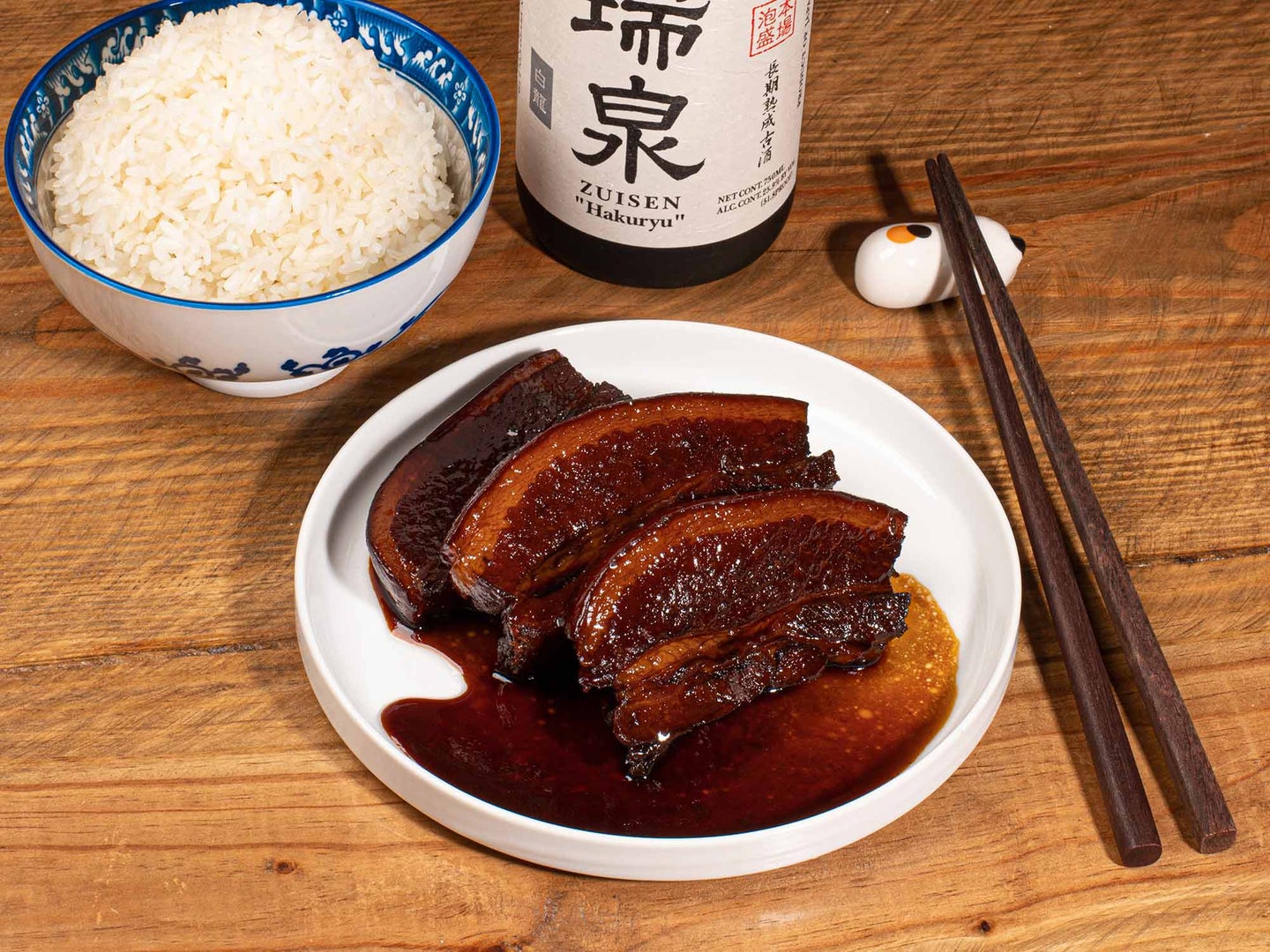 Some of the world’s greatest dishes demand a nip of wine or spirits to reach their full potential. Welcome to Splash in the Pan, where writer and drinks expert Tammie Teclemariam teaches you how to bring them to life.

Okinawan cuisine is notably distinct from that of mainland Japan, shaped by a subtropical climate, indigenous culture, and history of foreign occupation. Pigs have been cultivated on the island for millenia, and there’s an expression that “Okinawans use every part of the pig except the squeal,” exemplified in dishes like soki soup, using rib, and nakami, made with innards. But rafute, a treacly dish of pork belly simmered in soy sauce, sugar, and distilled spirits, is actually the regional take on a centuries-old recipe popular all over East Asia, made special by a bold, traditional shochu called awamori.

Like kakuni in mainland Japan, rafute was invented in homage of the Chinese dish dongpo rou, which is attributed to 11th century writer and epicure Su Dongpo. In both versions, thick chunks of pork belly are parboiled and simmered in a dark sauce until soft and sticky. Rafute, however, is defined by the hearty flavors of awamori and dark sugar. Compared to sake or vodka, awamori is weighty and flavorful, and so is the resulting dish.

“The Okinawan king often hosted Chinese dignitaries because they had trade relations,” said Stephen Lyman, author of The Complete Guide to Japanese Drinks and a shochu blogger, “so they mimicked the recipe and replaced the shaoxing with awamori to make it a uniquely Okinawan dish.” Lyman suspects the royal chefs chose to emulate a Chinese dish to honor their guests with something they would recognize as special, rather than serving the island’s local cuisine.

Awamori is Okinawan shochu, the Japanese spirit distilled from a koji-treated mash; it’s also the most anomalous shochu of all, with a pungent nose and flavor to match. Though most shochu is inoculated with white or yellow koji, a mold that converts starch into sugar, awamori must be made with black koji, an older strain which produces a more powerful aroma.

The other main element of awamori’s unmistakable flavor is the unique choice of grain. Most Japanese shochu is distilled from sweet potato, which provides a fruity taste, or barley, which yields a more grainy flavor. In Kumamoto, short-grain japonica rice is used to produce a clean and delicate spirit. Okinawan awamori, however, is made from Thai jasmine rice, an indica variety which is less expensive than the domestically grown japonica prioritized for national consumption. The longer jasmine grains contain a higher protein level, which creates awamori’s unique and savory flavors during fermentation.

Get the recipe for Rafute »

At one point, awamori was as good as currency in Okinawa. “The fact [the Okinawan royals] were cooking with awamori is a big deal,” said Lyman, “because awamori was illegal for non-royals to purchase.” Distillers, who were allowed to keep 5.4 liters from every batch, could barter their personal supply, but the remaining stock was guarded in the royal coin warehouse, to be doled out among guests and favorites.

In addition to awamori, rafute is also flavored with kokuto, a molasses-rich, minimally processed brown sugar produced in Okinawa and its neighboring islands.

Gamey pork belly is naturally robust enough to stand up to the wild aromas of awamori and raw sugar. You’ll still want to blanch and rinse the meat first, to draw out impurities that can cloud the sauce, and to prevent the pork from absorbing too much salt during cooking. Chill the parcooked pork, slice it into cubes, then simmer in a smoky broth of awamori, kokuto, soy sauce, and dashi until the juices reduce to a lacquer and the skin turns gelatinous. It takes little more than some pickled vegetables and white rice to round out the meal.

The glossy, salty meat is deep and earthy, and of course pairs splendidly with awamori. The spirit can pack a punch, especially when young, so if shooting or sipping it with your meal seems intimidating, try drinking it as many Okinawans do—mixed with an equal part of room-temperature water.