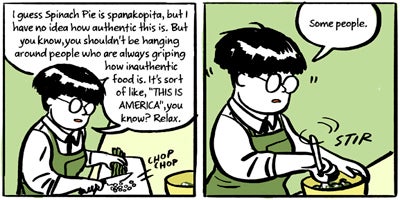 This week’s comic comes from Jillian Tamaki, a Canada-born, Brooklyn-dwelling artist whose prolific illustrations have graced the pages of many very fancy publications, and who is also the mastermind behind the online comic strip SuperMutant Magic Academy (it’s about, well, super mutants at a magic academy). Here, SuperMutant protagonist Marsha has a recipe for spanakopita that may or may not be authentic — but it doesn’t matter, because it tastes good:

Jillian Tamaki grew up in Calgary, Alberta, and now lives in Brooklyn, New York, where she teaches at the School of Visual Arts. Her illustrations have appeared in publications like the_New York Times,Esquire, and the_New Yorker_; she is the illustrator of the graphic novel Skim; and she’s the creator of the online comic SuperMutant Magic Academy._