While filing stories about politics and international conflict across five continents, the All Things Considered co-host has found connection and context in the food that’s shared 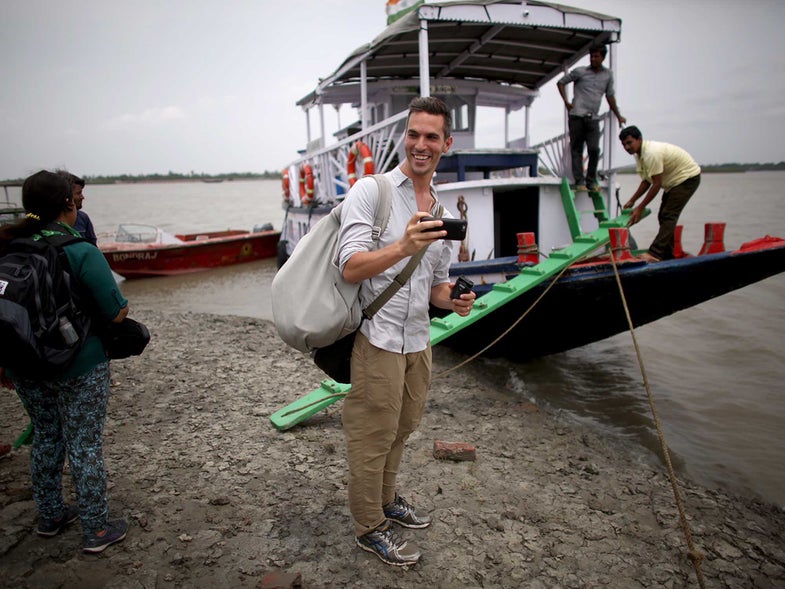 Before Ari Shapiro became a co-host of All Things Considered on NPR, he served as the network’s London-based International Correspondent, covering conflicts and filing stories from five different continents. A gifted reporter and storyteller, Shapiro also occasionally tours the world to sing in several languages with the band Pink Martini. (This star turn doesn’t surprise me; the last time I saw Ari in person, he played a lead role in our local JCC’s children’s musical theater 1993 production of The Hobbit; I was in the chorus.)

Shapiro’s career as a journalist has brought him to Northern Iraq and Eastern Ukraine, Jerusalem, Serbia, and New Delhi. Back home in Washington, DC, he often posts Instagram snapshots of the bounty of vegetables he’s purchased at the farmers market. But Shapiro’s interest in food isn’t just a down-time activity: Often, insights about eating are the key to deeper understanding of the people he meets and the stories he shares on the radio.

I caught up with Ari over the phone to talk about what he’s learned over lunch around the world.

Did you always want to travel?
My first overseas trip was the summer after my junior year of college. I got a fellowship to do an independent research project in Israel. And honestly, I was adrift and a little bit miserable. I think the typical story is, “I went overseas for the first time and I caught the travel bug and I knew that I would be restless forever more” and that was not my story at all.

But I’ve always been curious about people, about the world, and when I was graduating from college, that curiosity led me to apply for everything from joining the Peace Corps to working at Club Med. I was offered an internship with Nina Totenberg at NPR, and then I never left NPR. And it’s funny because at some point along the way, I kind of accepted that my dream of living abroad someday was not going to happen, because I was married, and lived with my husband in DC. And then the London position opened up, and that was what brought me overseas.

And so you both moved to London? He actually stayed in DC. We saw each other about once a month. And in a way it was actually helpful that he was in DC, because that meant that I could drop everything at a moment’s notice and go to Sarajevo, to Ukraine, to Iraq, and not have to worry that I was abandoning my husband in London, because he wasn’t in London!

I remember the very first time I went on an assignment to a relatively dangerous place, during the uprisings in Ukraine, I called my colleague Alice Fordham, who was a veteran war correspondent based in Beirut, and I said “This is going to be my first time leading a team, you know a translator, a driver, a security person, what’s your advice for managing a team like this?” And her advice was: always get lunch. Don’t skip lunch.

She was right. First of all, because everybody gets cranky if you skip lunch. But more fundamentally, if you never lift your head up and actually look around, and take a moment, you miss things that you might not at the time think are essential to the story, but in fact provide the nuance and detail that make the story come to life.

So you’re in Ukraine. Where do you get lunch?
The first place I ate lunch in Ukraine, I was with a reporter named Peter Kenyon who had been there for a few weeks. He said, I’m going to take you to this Crimean Tatar restaurant. The Tatars are a group within Crimea, the peninsula that Russia had claimed, and to me when I arrive, I think “Ukrainian food is a cuisine,” but of course, once you’re in Ukraine, no, there are regional and ethnic variations from city to city, from one part of the country to another. And because Crimea is on a peninsula, there’s more seafood; you come to understand more about the culture through what you’re eating.

And then, during my time in Ukraine, every time I went to eat, I felt like, “Oh, I’m eating Jewish food.” Because for me, growing up as an Ashkenazi Jew in America, what we considered Jewish food was meat dumplings and borscht and pickled herring—the kinds of things that people ate in the parts of Eastern Europe where my ancestors came from. But that wasn’t “Jewish food,” per se; it was the food of the region that the Jews who I’m descended from lived in. And that’s a kind of understanding that becomes way more real when you’re experiencing it, quite literally, internally, because you’re ingesting it.

I remember I was in Northern Iraq, and I went to this town called Snuny that had just been reclaimed from ISIS, and basically the mayor was there and a bunch of troops were there, but that was more or less it; families had not really started to come back. But hospitality is a hugely important part of the culture. They served us this meal that was basically chickpeas floating in broth, with a poached egg in it, and flatbread. Incredibly simple, profoundly delicious, and an authentic gesture of that moment in that place.

Or to give a completely different example, in 2012 I was embedded with the Romney campaign, and we would stay in Marriott hotels in Columbus, Ohio, or Manchester, New Hampshire; wherever he happened to be campaigning. And you’d think, well, one place is just like any other, there are these bland, anonymous hotels. But I would go to the hotel bar at night and ask for whatever local beer they had on tap. And that beer was an edible reminder that the place I was in was not just like every other place.

When you’re interviewing someone for a story, what can you learn by eating with them? I was just in Toledo, Ohio doing a story on Syrian refugees. My producer and I had just eaten breakfast, and we went to the refugee resettlement agency, and they said “Okay, the first guy we’re going to introduce you to is this really wonderful man, he’s been living in the US now for a year and a half. In Damascus, he was a chef, he owned a restaurant. And he doesn’t have a restaurant here, he doesn’t have anyone to cook for, so he’s going to insist on making falafel for us when we go over.”

We’re like, “We just ate breakfast, we’re really not interested in that.” And they say, “No, you don’t have a choice.”

So we went to his apartment, and he had set up this gorgeous assembly line with lemon slices, and cucumber, and the tahini sauce. And watching him make the balls and drop them in the hot oil, because of course he would not have fried the falafel until we walked in the door, and assemble these falafel sandwiches at high speed, and then make ten more for the entire staff of the resettlement agency, told us more about him than any interview. You know, this is who this man is.

That night, the Syrian-American woman who runs the agency insisted that we come to her house for dinner, and there were maybe six of us at dinner, and twelve platters of food on the table. It was like some kind of spectacular banquet, that again, tells you about a person in a way that just asking them about who they are might not.

What does it tell you?
Well, one reason that I love to cook is because sharing food with people is a form of connection. And feeding someone is a very intimate act, and the things that you choose to cook and the things that you choose to feed someone reflect who you are and where you come from. In the same way that for me journalism is all about finding connection and commonality, and helping all of us relate to one another, sharing food with someone serves that same function.

It’s hard to be angry at someone when you’re eating their food.

Are there places you would like to return to, just for the food?
Kurdistan in Northern Iraq has some of the most amazing food I’ve ever eaten. There was one time after a long day reporting, we were driving back toward the city of Erbil, which is kind of the Kurdish capital of Northern Iraq, and we stopped at what looked like a truck stop on the side of the road. We sat down at this little table, and we each ordered one dish, and suddenly this parade of plates started coming out, and this is just how food is served at these restaurants. There was soup and raw vegetables and stewed beans and flatbread, and it was literally ten plates per person in addition to the one thing we ordered, which in itself was enough food for three people. I took a photo of the table that was crowded with plates that were literally stacked on top of each other. And the food was all so good. I would love to go back and re-experience that.

Another place that I think of when I’m recalling foods that reflected place in a unique way is Sarajevo, which has always been at this confluence of Muslim, Christian, European, and Asian. On one hand it’s a melting pot, but on the other hand it’s been a source of conflict for so long. They have these little sausages, I think if they’re thicker they’re called ćevapi and if they’re smaller they’re called ćevapčići. And the spicing in these sausages tells you that you’re sitting at the junction of all these different rivers—spices from all these different directions.

Recently, in the days leading up to the inauguration, we were in the county that went more for Trump than any other county in North Carolina. We went to this place called the Mount Olympus diner. We got there for the Sunday lunch buffet, and there was the most amazing fried chicken and fried catfish. And we went back the next day and were interviewing people, there was a Democrat and a Republican and they were friends, and the Republican was sort of ribbing the Democrat, joking around. And when we left they wouldn’t let us pay for our coffee. You find these sort of hubs of community, where people go to connect with each other around food.

When I was in coastal Turkey, I met a Syrian guy who was on his way to Europe. He was going to get on a boat after midnight, and I invited him to this restaurant, and we had tea and little snacks, and I remember at the end, I went to pay, and he said “No, no, you’re not paying for me,” and I said, “this is a work trip, I’m expensing this. You’re on this journey, let me buy your tea.”

And he got offended, and he was like, “Do you think I’m poor? Just because I’m going to Europe on a raft? I’m a structural engineer, I’ve designed hotels in Dubai. I don’t need you to pay for my tea.” Of course, I would have paid for the tea had he been a hedge fund manager; this is what you do when you’re on a reporting trip. But for him this was: let me demonstrate to you that I’m not just a poor refugee. I realized in that moment that the gesture of eating together and handling the bill can be loaded with meaning.

So did you end up paying?
I split it with him.