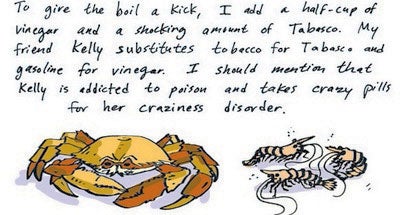 “Draw us a recipe.” That’s the brief we sent to a dozen of our favorite comic artists earlier this year; each week this summer, we’re thrilled to present what they sent back. They’re fantastic, beautiful, hilarious, thoughtful, informative, and often all of the above — and they prove that a recipe doesn’t just have to be words on paper. (Check out all the comics published so far in the archive.)

This week: Farley Katz, New Yorker cartoonist and proprietor of the webcomic Kids are Dumb. Here, Farley delivers the roadmap to a perfectly summery seafood boil. As he notes, “the key to this dish is variety. That, and ignoring the parts of this recipe that are lies.”

Farley Katz is a cartoonist for The New Yorker. He makes the webcomic Kids Are Dumb. His first book Journal of a Schoolyard Bully will be out in September 2011.