Presenting a few of our favorite Lone Star State chefs. 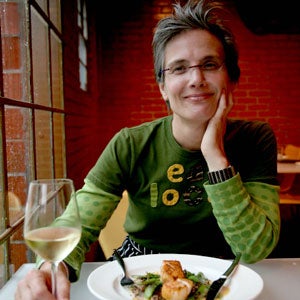 Texas has always laid claim to one of the most exciting restaurant cultures in the country, thanks to the pioneering spirit that distinguishes its most talented chefs. The scene is constantly evolving: Dallas used to be the locus of high-end eating, while the more rollicking Houston—a port city and magnet for immigrants—was far richer in casual and ethnic fare. Nowadays, though, virtually all the state’s major cities boast a few bright stars who borrow freely from Texas’s vast cultural grab bag and bounteous local larder. Here are six visionary chefs whose cooking is worth traveling for.

1. Bryan Caswell The 36-year-old chef at Reef, in Houston, is redefining Gulf Coast cuisine, knitting together existing strands of Louisianan, Mexican, Southern, and Texan cookery with contributions from the city’s Vietnamese, Thai, Indian, and Filipino immigrants. The result is a seafood restaurant that’s exuberantly Houstonian, where oysters rockefeller come with local chard and Indian lime pickle, and pan-roasted grouper turns soulful with pecan-shallot cracklings. Caswell, a keen fisherman who is seldom seen without his Astros cap, has also heightened locals’ interest in neglected Gulf species. If cobia, amberjack, and sheepshead are all the rage in Houston these days, the trend can be traced to Reef’s doorstep.

2. Tyson Cole Cole wasn’t popular when he started working in Austin sushi bars at the age of 23. “Customers were like, ‘Are you going to make the sushi? I would much rather that guy make it because he’s Japanese,'” he recalls. Not one to be easily thwarted, Cole eventually started making trips to Japan, where he learned the language and picked up some impressive knife skills. His first restaurant, the madly innovative and successful Uchi, opened in a revamped south Austin cottage in 2003 and wowed diners with such groundbreaking pairings as scorpionfish with wild strawberries, golden beets, lemon verbena, and rhubarb. His second venture is its more experimental sibling Uchiko, which is due to open next spring. Austinites are hoping that he’ll hurry up.

3. Robert Del Grande When Del Grande opened Houston’s now legendary Cafe Annie, nearly 30 years ago, he completely changed the way that city’s diners thought about local ingredients. Suddenly Gulf blue crab was stuffed into tostadas, and black beans were layered with goat cheese in a terrine. (That latter dish became so popular that regulars threatened to bolt if Del Grande took it off the menu.) The chef eagerly and openly looked to his Hispanic line cooks and crew for inspiration; the restaurant’s many moles prove that point. What we love the most about Del Grande, though, is that he’s not your typical chef turned restaurateur. Though he and his business partners oversee a half dozen restaurant projects (including the coming redo of Cafe Annie, which will soon be reborn as the grill-centric Restaurant RDG Bar Annie), he can often be found in one of his kitchens, cooking up a storm.

4. Dean Fearing You may know Fearing as one of the fathers of New Southwestern cuisine, but did you know that he plays the guitar in a popular alternative country band called the Barbwires, with Robert Del Grande (see above)? Or that he spends his days off visiting his producers’ farms with his two kids? Fearing, the lanky, French-trained chef who worked at the Mansion on Turtle Creek for 20 years, never fails to surprise us. First it was dishes that drew on his folksy Southern upbringing, like fried chicken with mashed potatoes and green beans; then it was his Southwestern signatures, like the velvety tortilla soup studded with chicken and avocado. His latest shocker? Fearing’s, a lavish, two-year-old venue in the Ritz-Carlton Hotel. Fearing continues to traffic in the smoky, deep flavors of the Southwest, but he’s added a few Asian twists along the way: these days, for example, his barbecued shrimp taco comes with a pickled red onion and mango salad.

5. Monica Pope The chef-owner of Houston’s T’afia has done more than perhaps any other Texas chef to spur the use of local and traditional ingredients. “We’re renegades,” she says of Texas cooks. “We want to cook from wherever we find ourselves, and Texas is the only place we want to be.” Pope taps into her fans’ regional pride by hosting a farmers’ market each Saturday in T’afia’s parking lot and cooking classes in its kitchen. In the process of ferreting out growers and ranchers, she has given her global, eclectic menu a more distinctly local cast: consider her wild Gulf shrimp salad with cabbage, grapefruit, peanuts, and nuoc mam or her bay leaf flan with local persimmons and creme fraiche, all paired with Texas wines.

6. Andrew Weissman San Antonio is supposed to be famous for puffy tacos, not puff pastry, but hometown hero Andrew Weissman slew that stereotype when he returned from cooking stints in France to open the refined downtown restaurant Le Reve in 1998. Critics and civilians alike flocked there to taste this bold young chef’s classic French dishes, which were often spiked with international ingredients (think kaffir lime leaf and coconut broth with diver scallops or a foie gras sandwich with tomato jam and bacon). In 2005 Weissman opened the casual Sandbar Fish House & Market, next door to Le Reve, and this year he’s venturing into Italian with Il Sogno. Like Le Reve’s, its name means the dream.