A Sandwich for the Ages

An ode to the McDonald's Egg McMuffin. 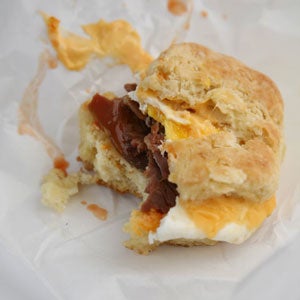 As a rule, I don’t partake of fast food, but I allow myself one exception: the McDonald’s Egg McMuffin. In defense of my habit, I often point out that this sandwich is comparatively wholesome, containing lean Canadian bacon, a fresh egg, and melted (okay, processed) cheese on a toasted English muffin. Part of my attachment to the food is sentimental. When I was a kid, it was the only breakfast I ate outside the home—on road trips, early mornings out on the boat with my dad, and other fun breaks from routine. With some ketchup and a dab of jelly (a sweet-tangy tweak), it’s a darned good breakfast.

I was reminded of my affection for the Egg McMuffin recently when I came across a newspaper obituary for Herb Peterson, the product’s inventor, who died last March at the age of 89. A former adman for McDonald’s, Peterson developed a friendship with Ray Kroc, the man who purchased the fledgling burger chain in 1961 and turned it into a fast-food phenomenon. After a successful corporate career in Chicago, Peterson relocated to Santa Barbara, California, where he opened his own McDonald’s franchise. According to McDonald’s: Behind the Arches (Bantam Books, 1986), a corporate history by the journalist John F. Love, Peterson departed from the burgers-and-shakes script and started opening early to serve breakfast. His signature offering was a fast-food take on eggs benedict, the brunch classic consisting of poached eggs, hollandaise sauce, and Canadian bacon on open-face English muffins. Since poaching the eggs was out of the question in a fast-food kitchen, he cooked them with a tool that a local blacksmith had custom-made for him: a grill-top Teflon mold that fashioned eggs into perfect rounds. For efficiency’s sake, he swapped in cheese for the hollandaise.

When Kroc tasted the sandwich in 1971, Peterson was prepared to pitch it in cost-profit terms. “But it wasn’t economics that sold Kroc,” writes Love in his book. “He had just finished lunch…but he devoured two of the new egg-bacon-muffin sandwiches anyway.” Four years later, the Egg McMuffin became McDonald’s first nationwide breakfast item, and by 1985, the meal was accounting for 15 percent of the company’s sales. Sure, I’ve had my quibbles: for one thing, it’s too bad that McDonald’s stopped using Bay’s English muffins (they weren’t uniformly shaped enough). Yet, like millions of hungry breakfasters, I keep coming back for more.