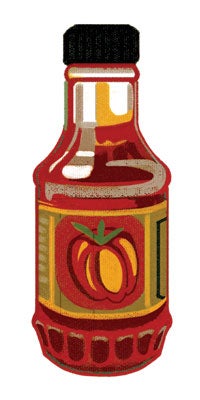 Aside from texture, the most obvious difference between eastern- and western-style North Carolina barbecue is the sauce. The spice-spiked, vinegary version down east dates back to early American recipes that called for tenderizing meat with something acidic. Once tomato ketchup became available, in the 1800s, barbecue cooks in the west started sweetening their “dip” with the stuff. John Shelton Reed and Dale Volberg Reed, authors of Holy Smoke: The Big Book of North Carolina Barbecue (UNC Press, 2008), credit that addition to the Germanic ancestry of many Lexington cooks. “We suspect they thought barbecue tasted better with a soupçon of Heinz because the classic eastern sauce had no sugar in it and adding ketchup brought it closer to the sweet-sour taste so common in German cookery,” they write. Though both versions carry some piquancy, most North Carolina barbecue restaurants offer a bottle of another local sauce for diners who like more heat: Texas Pete, which first appeared on tables in 1929.