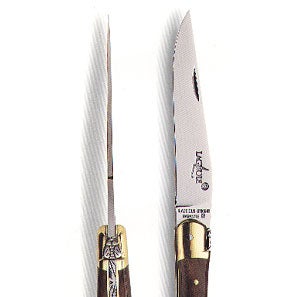 A small French mountain town about 350 miles south of Paris, Laguiole (pronounced “lie-yole”) is famous for its cattle, its cheese, and above all its cutlery. The laguiole knife (or simply “le Laguiole”) exists in numerous forms. The original, dating from the early 19th century, was a farmer’s tool, sometimes with a corkscrew and an awl set into the handle. A refinement is the Laguiole steak knife—common today in, among other places, French three-star restaurants, where it is the meat-cutting tool of choice. The knife’s form is elegance itself, with a gently curving blade, an elongated pistol-grip handle, and a small stylized bee or fly (no one is quite sure which, or why) set into the bolster. Put them together, and you’ve got a knife that bears as much resemblance to the usual chophouse slicer as a Baccarat goblet does to a souvenir-shop coffee mug.