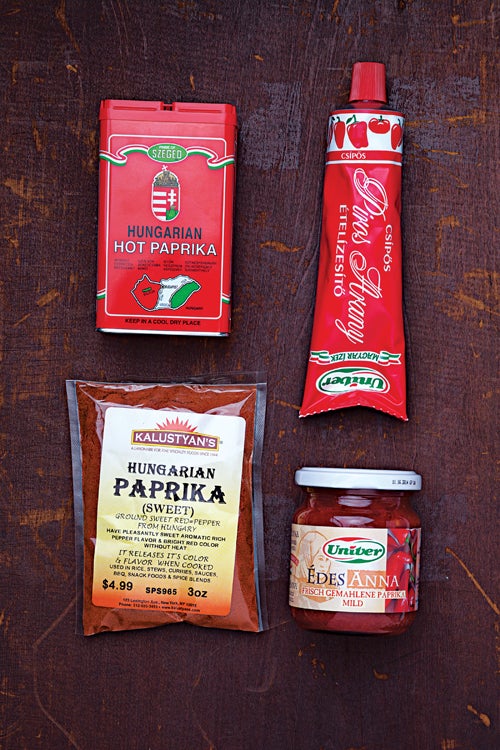 The long, slender variety of Capsicum annuum pepper and the method for drying and grinding it to produce paprika are thought to have been introduced to Hungary by Turkish invaders in the early 1500s. It was a hit with Hungarian farmers, who found that the pepper thrived in the country’s mineral-rich soil and sunny climate. By the mid-1800s, paprika had taken hold: Everyone from the peasantry to upper classes had embraced the spice. Today, while paprika is produced in other countries, the Hungarian version is widely considered the best. Paprika varies in spiciness depending on the amount of capsaicin-packed seeds and ribs incorporated into the spice. 1 Hot paprika (labeled csípős or erős), which includes the seeds and ribs, is used to add heat to a finished dish. In addition to powdered paprika, cooks work with a variety of condiments made from minced fresh paprika peppers. 2 Piros Arany, a smooth, creamy red paste sold in tubes, comes in mild and hot versions and is popular as a sandwich spread. Hungarian cooks prize 3 sweet paprika (sometimes labeled édes) for its fruity, earthy flavor. Made from the flesh of the chiles only, it’s typically added to cooking fat to create a base for paprikás dishes, soups, stews, and more. 4 Édes Anna, a mild, coarse paste, is used mainly at the table
to flavor soups or stews.