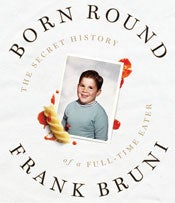 Frank Bruni did not start out as the highfalutin food connoisseur one might expect to be penning restaurant reviews for the New York Times. For many years, the hard-nosed journalist knew food not as the subject of an epicurean craft but as an unhealthy obsession at the center of a cycle of bingeing and purging. Now he has left his position as restaurant critic and is sharing his food-related secrets in the memoir Born Round: The Secret History of a Full-Time Eater (Penguin Press, 2009).

The book focuses on Bruni’s early relationship with food, from its significance in his Italian-American family to its impact on his social life. When he was growing up in White Plains, New York, in the 1960s, food symbolized power and tradition, illustrated by his relatives’ familial battles to create the most indulgent of holiday spreads. Bruni writes, “Mom treated our holiday visits as Make-A-Wish Foundation moments, only all the wishes involved eating,” from his favorite chicken divan to homemade Egg McMuffins. Rendered beefy from these feasts, Bruni later laments his love of food, fervently chasing the “wondrous Xanadu of the willfully emaciated” with bulimia, doses of laxatives, and amphetamines. His issues—and his waistline—only grow larger from there.

Reflecting on college, he writes, “It was Haagen-Dazs or love. I couldn’t have both.” Post-college, he immerses himself in journalism, working as a reporter on George W. Bush’s campaign trail (where they were “fattened like Angus steers”) and, eventually, as an overseas correspondent in Rome, which prompted an epicurean epiphany. “I had [previously] equated Italian food with bounty, with superabundance,” notes Bruni. In Italy, his focus finally shifts to quality over quantity: “I didn’t feel the urge to eat so much because what I had to eat was so excellent.”

Then he lands the job of food critic for the New York Times, at which point—after a rather indulgent discussion of his fluctuating pant sizes—the memoir picks up. Bruni charts his fast-food-fueled road trip across the United States for the Times, whimsically dubbed “Transfatamerica,” and reveals his various dining disguises over the years. Throughout, the book is full of bright Bruni-isms, including plenty of snarky descriptions of subpar restaurants: “The decor evoked a third-grade arts and crafts project, and the thicket of long skewers in which grilled meats were served made the whole experience rather frightening, like dining with Edward Scissorhands.” Commentaries like these, spiced with Bruni’s lively, humorous voice, are what have come to distinguish him as a food writer.

Continuing his 14-year stint at the Times, Bruni is moving on to become a staff writer for the Sunday magazine, reporting on a wider range of topics. And—though it remains a challenge—he’ll continue his ongoing effort to maintain a balanced relationship with food, defying his grandmother’s adage “Born round, you don’t die square.” Though his unbridled appreciation for food may have provided some pain in the past, he’s learned how to tame his appetite while still seeking pure gastronomic pleasure. —Alexa Weibel, SAVEUR