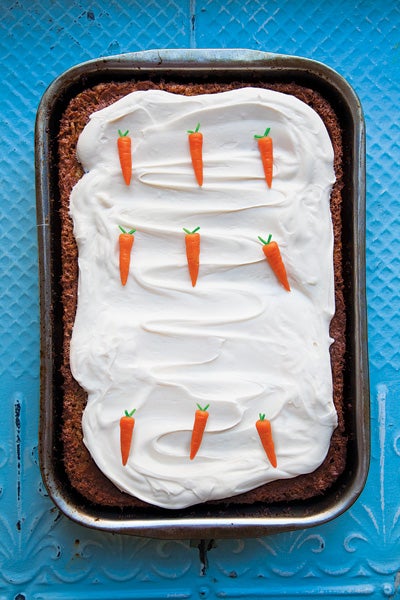 There’s a rule in my family: where there is a wedding, there will be carrot cake. At my own wedding, in 2008, I served two—one with raisins, one without—even though my husband professes to hate carrot cake of any kind. I had no choice.

What’s odd, given my family’s fidelity to this cake, is that none of us can agree on which version is the real deal. Beyond a requisite portion of grated carrot in the batter, the definition is remarkably elastic, and anything from a mildly sweet quick bread to a multilayered, lavishly frosted fantasia might qualify as classic. My mom insists that walnuts equal authenticity; I maintain that golden raisins are an essential mix-in. And my grandfather’s wife makes the most elaborate carrot cake of any of us, embellished with pineapple, coconut, and a thick coating of cream cheese frosting.

All of the above are a far cry from the medieval British carrot puddings from which today’s carrot cakes descend. Those steamed and suet-enriched desserts relied on carrots’ natural sweetness in an era when cane sugar was costly and frosting as we know it had yet to be invented. By 1783, a cinnamon-spiced carrot tea cake was on the bill of fare at Fraunces Tavern in New York City, but it remained as bare of frosting as its pudding predecessor and contained no fruits or nuts. Recipes for carrot cake published a century and a half later in the Chicago Daily News Cook Book (Chicago Daily News, 1930) and Prudence Penny’s Cookbook (Prentice Hall, 1939) brought walnuts, raisins, and almonds into the mix. Though canned pineapple and packaged shredded coconut had been available to home cooks since the turn of the century, it wasn’t until the 1960s that they started lending carrot cakes a tropical twist very much in keeping with the postwar craze for all things Polynesian. It was in the ’60s, too, that cream cheese frosting entered the equation, and even with such a rich topping, many cooks still perceived carrot cake as a healthy dessert. Its popularity soared.

Though every member of my family favors a different recipe, our collective commitment to carrot cake remains sacred and binding. Two years ago, faced with a groom who refused to eat it, I finally acquiesced to the following prenuptial agreement regarding our wedding reception: we’d serve a dozen small cakes of varying flavors, no fewer than two of them carrot cakes. It wouldn’t have felt like a wedding without them.