How the In-N-Out Burger Was Born

It was a chain reaction 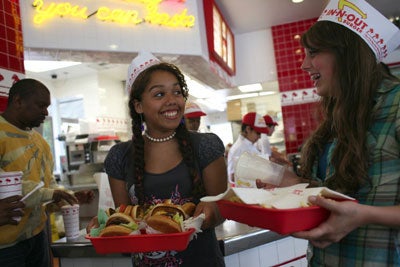 As far as fast-food burgers are concerned, they don’t get much better than the ones from In-N-Out Burger, the family-owned chain of about 200 take-out restaurants in California, Arizona, Utah, and Nevada. Those burgers are made from fresh beef chuck that’s ground daily and never frozen; the buns are baked fresh and are grilled so that they have a nice, crunchy edge; and even the french fries are hand-sliced on-site. The kitchens of In-N-Out’s gleaming, white-tiled locations don’t have microwaves, freezers, or warming tables, because every sandwich is made to order: griddled patties of beef layered with fresh tomato slices (exclusively from the center of the fruit) and shreds of iceberg lettuce (from the crunchiest inner leaves).

It’s still fast food but very tasty all the same, so much so that In-N-Out has garnered a cult following over the years. Even Eric Schlosser, who wrote Fast Food Nation (HarperCollins, 2001), the ultimate indictment of America’s industrialized, on-the-go food culture, calls himself a fan. Indeed, the way In-N-Out operates seems to contradict happily everything we associate with fast food today: mechanized kitchens delivering overprocessed industrial food to undiscerning customers. And yet, seen within the arc of the history of fast-food burger joints, In-N-Out represents less a great leap forward than a nostalgic look back.

When the caterer Harry Snyder and his wife, Esther, opened the first In-N-Out, in Baldwin Park, California, in 1948, the fast-food hamburger was in a sort of golden adolescence. Though the concept of franchising—licensing out operations to independent contractors—was being toyed with by some entrepreneurs, most of the burger joints popping up just after World War II were still, by today’s standards, old-fashioned, from-scratch operations. What made them novel, and so poised to conquer postwar American appetites, was their mode of delivery: fast, systematized, and uniform—qualities that were immensely alluring at the dawn of the automobile age. (In-N-Out’s particular innovation, a momentous one, was a two-way speaker outside of the building that allowed customers to order from their cars without the presence of a carhop.)

The fast-food hamburger as we know it was born in 1921, at a restaurant in Wichita, Kansas, called White Castle. There, a fry cook named Walter Anderson is said to have married beef and bun for the very first time. What matters more than the invention of the sandwich itself, though, is the way Anderson and his business partner, a real estate agent named Billy Ingram, pitched it to the public. The two men changed the image of the hamburger sandwich—early versions of which had typically been sold from unseemly street carts and lunch counters—through branding: the business’s name suggested purity and nobility, and the company promoted such airs by hiring a spokesperson to persuade women’s groups that White Castle hamburgers were wholesome fare, ideal for family meals.

Bolstering White Castle’s claim was the dainty, square burgers’ near-perfect uniformity, which Anderson and Ingram proudly attributed to the White Castle System: an organizational plan that allowed cooks at any location (by 1930 Anderson and Ingram were running 100 more or less identical restaurants) to turn out lots of burgers with minimal blips in quality. As Henry Ford had done for cars, the White Castle founders were channeling the mechanical, modernist life force of the 1920s, the respect for systemization and sameness, into the making of burgers. If his burgers projected the image of progress and purity, Ingram reasoned, Americans would flock to White Castle to eat them.

Of course, they did, and by the mid-1930s, there were plenty of copycats: White Tower (in the Midwest), Royal Castle (in Miami), White Manna (in New Jersey), and others, most of them touting their own, proprietary “system”. But, despite the success of their efficient production scheme, Ingram and Anderson were able to expand their empire only so far, because they insisted on personally supervising operations. For burger joint operators with greater ambitions, the future lay in franchising.

As it happens, the history of the modern-day global burger franchise begins the same year that In-N-Out was born. In 1948, two brothers, Richard and Maurice McDonald, opened a glass-walled, octagon-shaped hamburger stand called McDonald’s Famous Hamburgers in San Bernardino, California. A few years later, a Chicago-born milk shake machine salesman named Ray Kroc walked into the restaurant and was awed by the brothers’ ultra-efficient, largely automated system for making burgers—a Cadillac to White Castle’s Model T. In 1955, he became the McDonald brothers’ franchise distributor. Five years after that, he had trained franchisees for 100 locations across the United States. And in 1968, with 1,000 restaurants under its umbrella, McDonald’s made the switch from fresh meat to frozen, and no one seemed to mind.

By then, big, profitable burger franchises were becoming the norm, and their success was not ignored by corporate America. The Pillsbury food conglomerate bought Burger King in 1967. General Foods bought the rival chain Burger Chef the same year. And in 1968 Ralston Purina acquired Jack in the Box, a popular California drive-through chain. More corners were cut: cheaper beef; artificial flavorings in the patties and buns. A few big chains made a show of bucking the trend—most notably Wendy’s, which was founded in 1969 and offered “old-fashioned” burgers made with fresh beef and served with toppings that the customer could pick and choose—but the mold had been cast.

All the while, In-N-Out remained willfully stuck in its 1940s-era track. Harry and Esther Snyder never licensed out their operation, nor did they expand their menu beyond burgers, fries, and drinks. By the mid- 1970s, when national burger franchising was skyrocketing, In-N-Out had only 18 branches, all run by Harry and Esther and their two sons, Guy and Rich. When Esther passed away, in 2006, ownership went to her 24-year-old granddaughter, Lynsi Martinez, whose brother-in-law Mark Taylor was named president. In an interview with the Orange County Register, Taylor stated that “the family is absolutely committed to keeping the company private and family-operated”.

The journalist Stacy Perman, in her book In-N-Out Burger: A Behind- the-Counter Look at the Fast-Food Chain That Breaks All the Rules (Collins Business, 2009), points out that keeping In-N-Out in the family is just one way the Snyders represent an anomaly in the fast-food world. “Frequently the subject of rumor and speculation, the fastidiously private company has always shunned the kind of publicity that its competitors routinely courted,” writes Perman, whose exhaustively researched book was written without the company’s cooperation. “And while it has rarely bothered to counter or clarify the murmurings, the conjecture has touched on everything from the recipe for its secret sauce to the meaning of the twin palm trees planted in a cross formation at each store.”

That merely sticking to an older way of making burgers has generated such an obsessive mania among fans seems to be evidence of a desire on the part of the burger-eating public to get back to basics. And while a number of burger chains these days are touting their use of fresh (even, in some cases, organic) ingredients and others are using nostalgia as a hook—think Johnny Rockets, whose 200-plus franchises around the world are modeled after retro burger joints—In-N-Out seems content to let its burgers speak for themselves.

All of which is not to say the company does nothing to advance its own mystique. A case in point is its “secret menu”, a list, formerly known only by word of mouth, that includes custom burgers with names like the Flying Dutchman (double meat and cheese, no bun) and the Double Double Animal Style (two patties cooked with mustard and served with onions, extra cheese, and sauce). The secret menu isn’t really secret anymore—you can find it on the company’s website—but it helps make In-N-Out’s customers feel special, as if, amid all that sameness out there, they were being given something unique.