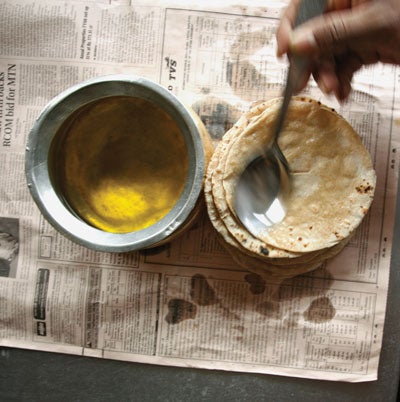 Discovering clarified butter when I was in culinary school several years ago was a real breakthrough. Our instructor simmered butter until the water in it evaporated and the milk solids separated out, leaving a clear, golden liquid behind. This is butter at its purest, he told us. Clarified butter won’t burn, smoke, or spoil, and it’s got a rich, nutty taste. Later I learned that, in India, clarified butter, called ghee, is essential to everyday cooking; Indians enrich stews and braised dishes with it, spread it on flat breads, and even use it as a salve and in religious ceremonies. You can buy jars of ghee everywhere in South Asia, though it’s easy to make at home. You just toss two sticks of unsalted butter into a small pot and melt it over low heat, taking care not to burn it. Remove it from the heat when the milk solids have sunk to the bottom of the pot. Then pour the liquid through a cheesecloth-lined sieve into a clean glass jar, leaving the solids behind. I store my clarified butter in the fridge and use it for all sorts of dishes I would otherwise cook in regular butter: omelettes, sauteed onions, roast chicken. You’ll find your food browns more evenly, and the clarified butter gives off the most splendid, caramel aroma. —Lauren Klatsky, Boston, Massachusetts