These graham crackers are a grown-up treat. 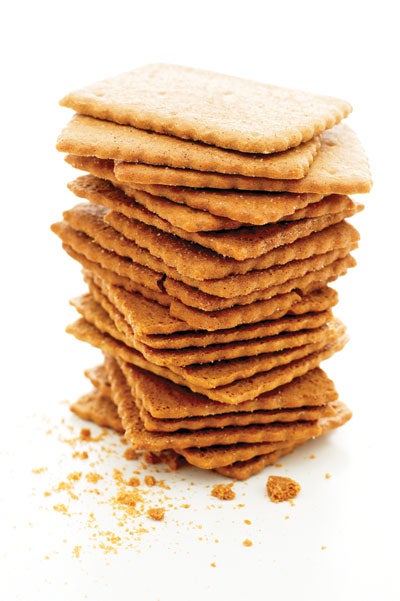 What a disappointment most of today’s graham crackers would be to the Reverend Sylvester Graham. A leader in the 19th-century temperance movement, Graham was also one of America’s early food reformers; commercial breads drew his particular ire due to the chemical additives, such as alum and chlorine, used to whiten the flour. He recommended baking healthful crackers with what came to be known as graham flour—coarsely ground, minimally processed unbolted wheat. That refined flour is the main ingredient in most of today’s crackers bearing Graham’s name is bad enough. That they are often dusted with cinnamon, a spice Graham claimed could provoke unrestrained sexual appetites and even insanity, would certainly have been abhorrent to the upright reverend.

I don’t entirely approve of commercial graham crackers, either, loaded as many of them are with high-fructose corn syrup and partially hydrogenated oil. But I am a fiery advocate of Pollystyle’s version: crisp cookies with a rich, caramelized flavor and a substantial crunch, which outdo mass-produced grahams’ powdery sweetness. Washington, D.C., baker Polly Brown bakes them with honey and whole wheat flour. (She hasn’t yet found a source that will provide true graham flour in bulk.) Brown was first drawn to graham crackers as part of her quest to restore traditional baked goods—real English muffins, proper scones—to their rightful glory. About seven years ago, she began combing through vintage cookbooks for graham cracker recipes. She wasn’t looking to go all the way back to Graham’s recipe; the original was a thick and rather stodgy thing. Instead, she tried to better the ones she loved as a girl, enriching them with butter and a touch of dark brown sugar. The result is a slightly voluptuous, wholly satisfying biscuit.

Pollystyle’s crackers would be terrific in any of the usual ways we use graham crackers: blitzed and blended with butter for a pie or cheesecake crust, or dripping with melted chocolate and marshmallows in s’mores. Not that they require much, if anything, in the way of embellishment: I nibble them plain with a cup of afternoon tea or spread a thin layer of almond butter on them. Even better, I serve them at cocktail hour with ripe Camembert, sliced pear, and (with apologies to Reverend Graham) glasses of chardonnay. Pollystyle graham crackers sell for $6.50 per dozen, plus shipping. To order, call 202/258-7052.