Daikon, long a staple in Asian cuisines, has now taken root in the American kitchen. 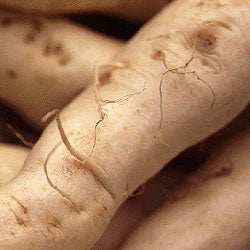 In 1994, fresh from Carleton College in Northfield, Minnesota, I moved to Japan. Hungry for something different—literally—I had signed up to teach English for a year and a half in Suwa, a small town in the middle of the country. As if it were yesterday, I remember my first trip to the family grocery on the corner, its narrow aisles crammed with things I couldn’t identify. It was the pyramid of enormous roots, however, that brought me up short. I found the sheer size of the vegetable startling, and I watched, in disbelief, as all the other women—petite Japanese women—gracefully hefted them into their baskets.

Daikon in Japan have been known to tip the scales at 50 pounds. (In Japanese Cooking: A Simple Art, Shizuo Tsuji says the standard is “as thick as a girl’s leg”.) Most Japanese, though, are undaunted by its size, and one household can go through an average specimen in a day or two. There are daikon pickles (each region, town, and family seems to have its own special recipe); raw shreds heaped atop deep-fried tofu; delicate shavings beneath slices of sashimi; and sweet, tender chunks afloat with fish dumplings in oden, the classic winter stew. Once I was served a bowl of something grated and lightly dressed, so mild I thought it was an apple. “No, no, Beth-san,” my amused friend corrected me. “It’s daikon.”

Daikon is a radish, Raphanus sativus, a member of the extensive mustard family, related to broccoli, cabbage, and kale. Its peppery leaves are sometimes stir-fried with other greens, and the sprouts occasionally turn up in salads, but it is the root, covered with a very thin pearly skin, slightly less white than the snowy inside, that has long been treasured throughout the Far East, albeit in different ways in different countries. In China, where daikon was first cultivated (the oldest reference dates to the seventh century B.C.), it is thicker than the Japanese variety and hardly ever eaten raw. Instead, it is chopped and added to stews and soups, or mashed fine, mixed with flour and pork, shaped into small patties, and steamed. In Korea, it is rounder and usually pickled for kimchi, the pungent condiment found on virtually every Korean table. The name daikon originated in Japan (the character dai means “great”; kon means “root”), where it is the country’s fundamental vegetable—and as for ways of cooking it, anything goes.

In Suwa, I used to eat grilled samma, a local fish, at least once a week in the autumn months. However, I doubt that I would have found the dish half as satisfying had it not been for its signature garnish of grated daikon. (The Japanese use a special grater, called a daikon-oroshiki, to obtain the superfine texture.) The vegetable, slightly bitter when raw, is the perfect contrast to richer foods, samma or tempura in particular.

But as often as daikon is used as a complement to, or mere component of, a dish, it also turns up alone, sliced into thick rounds, pared to its core, and poached in dashi (bonito and seaweed broth) until fork-tender. From here, it is often served warm, smothered in a creamy miso sauce, or at room temperature, topped with shiitake mushrooms, shrimp, and asparagus. I’ve also heard of Japanese cooks carving holes into hunks of daikon, stuffing the holes with dried red chiles, and then grating the two together for a more piquant finishing touch; and of chefs using daikon as a tenderizing agent for octopus. I even once had the radish for breakfast: Buddhist monks at a local temple served me soupy rice with pickled daikon.

The versatility of the vegetable seems endless. After I began cooking it, I always felt safe when walking home from the grocery with my bag of fresh produce—I used to think that if anyone tried to mug me, I could easily whonk my assailant over the head with my daikon.

With a little artful whittling, though, the “bludgeon” of the vegetable kingdom can be transformed into delicate coins, hexagons, plum blossoms, and fragile decorations almost too beautiful to eat: Master chefs in East Asia carve daikon into staggeringly intricate chickens, roses, baskets, and fish. In Japanese cooking schools, adroitness is often judged by a student’s ability to peel daikon in such a way that one is left with a single, continuous, paper-thin sheet—using a cleaver. Depending on one’s dexterity with the knife, these transparent trimmings can become anything from the standard bed for seafood to an exquisite looping anemone, dyed deep pink.

Needless to say, I left Japan a convert to the root, and I was pleasantly surprised to find that I didn’t need to look too hard to find it in the United States. I did discover, however, that the daikon sold here is nowhere near as intimidating as it is in Asia: It rarely measures more than a foot in length; our garnishes are never, well, so rococo; and the all-purpose but archaic cleaver has been supplemented with all kinds of mandolines and fancy vegetable slicers. One story has it that daikon debuted in the U.S. in the mid-1800s, when news of the gold rush in California enticed many Chinese to cross the Pacific. Most of our daikon crop still comes from California, where it’s grown year-round, though the roots are milder and more flavorful in fall and winter than those grown in warmer weather.

All vegetables are healthful, but daikon is surprisingly so. About 1 cup provides 36 percent of the recommended daily allowance of vitamin C, and also aids in the digestion of oily and starchy foods, the perfect antidote to the too-often unhealthful Western diet.

So finally Americans are paying attention to the giant white radish, now available in supermarkets, health food stores, and Asian groceries across the country. Choose roots that are solid and hard with smooth, opalescent skin, and don’t buy a daikon that is flexible or flat-colored: It’s old and has probably lost most of its flavor and texture. If greens are attached, look for those that are crisp. When you get home, cut off the greens, wrap the root tightly in plastic, and store it in the vegetable crisper of your refrigerator. Use it within two to three days if eating it raw; within one week if cooking with it. Bottom-line, though: Use it. Since returning to the States, I, for one, cannot imagine my kitchen without it.