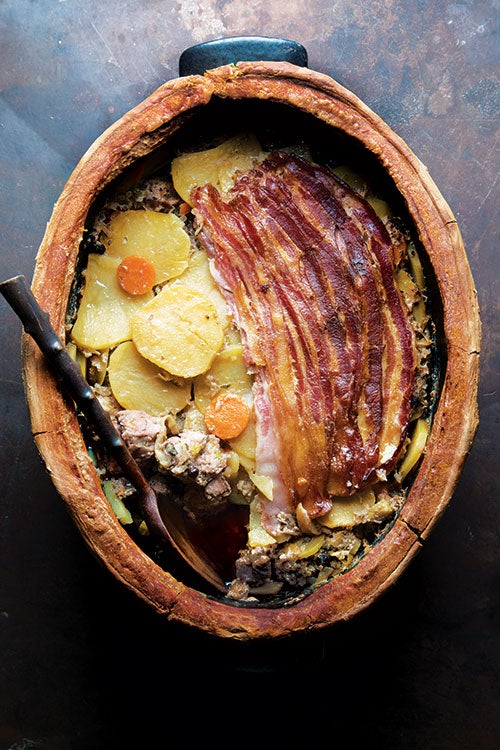 This wine-simmered dish of meat and vegetables cooked in a dough-sealed pot is Alsatian through and through. Todd Coleman
SHARE

“Sophie!” chef Andre Soltner put the accent on the second syllable as he greeted me at the door of my alma mater, the International Culinary Center in Manhattan. I had come there so he could teach me how to make bacheofe, a medley of pork, beef, lamb, and vegetables simmered in wine in a ceramic pot that’s sealed with a band of dough to prevent juices from escaping.

I had recently moved back to New York from warmer climes. The city felt cold; there was a chill in the air that made me long for comfort: a warming stew, a day with a beloved mentor. I figured I might as well combine the two. I had heard about, but never eaten, bacheofe, a delicious-sounding stew that Soltner, the school’s Alsatian-born dean, has been making since he was a child in Thann in northeastern France. So I asked him if could apprentice myself to him for a day. After informing me that I’d have to supply the proper crockery, as well as marinated meats, which he insisted include pigs’ feet and “at least one tail,” he accepted.

And so, ever the student, I dutifully lugged a heavy terrine and a bag of marinated meats through the streets and met my old dean. Soltner, the former chef-owner of the legendary Manhattan restaurant Lutece, ushered me inside to a corner of a kitchen where students were prepping for class. I plunked down my parcels, and we headed to the fridge, where he spooned out something thick and white. I arched an eyebrow.

He grinned, “Goose fat!” A coating for the pot and lid, the fat was purely for flavor, a lavish yet elemental touch typifying the cooking of Alsace. The region was passed between Germany and France four times since the fall of the Holy Roman Empire; its food is an amalgam of the two countries: Teutonic practicality mixed with a dash of Gallic refinement, expressed in dishes like choucroute, that famed braise of sauerkraut, sausages, and pork that looks plain but tastes magnificent.

In that respect, bacheofe (also spelled baeckeoffe, backenoff, or baekaoffa, according to dialect) is Alsatian through and through. It’s an improvised meal of odds and ends that cooks for hours at low heat while you go about your business and emerges from the oven with enormous flavor.

According to the French culinary bible, Larousse Gastronomique, on Monday washdays in Alsace, women would take a filled terrine to the baker, who would cook the bacheofe in the residual heat of the oven—the dish’s name means, literally, “baker’s oven”—to be retrieved post-laundry. When I mentioned this to another Alsatian-born chef, Jean-Georges Vongerichten, he told me of a variation on the tradition: In Illkirch-Graffenstaden where he grew up, he would drop off his mother’s bacheofe on Sundays before church and retrieve it after services. As I was instructed by Soltner to do, Mere Vongerichten marinated her meats overnight in a crisp Alsatian wine, which flavored and tenderized the cuts.

In the ICC kitchen, the dish proved easy enough to construct. After I sliced potatoes, onions, and carrots, Soltner greased the pot with the fat and layered potatoes on the bottom. He piled the meat and vegetables on top, then plunged the pigs’ feet and tail in, so that their cartilage would melt and, deliciously, thicken the stew. Another layer of potatoes sandwiched the meat. Then he added a final flourish: slices of bacon latticed over the top.

“This isn’t traditional,” the chef said with a wink, “but why not?”

He covered everything with a dry white wine, sealed the lid with a dough rope rolled from a quick flour-water paste, then placed the stew in the oven where it would cook for three hours, its savory, aromatic flavors melding inside the heavy terrine. That pot, which I ordered online to approximate one from the town of Soufflenheim, may be the most Alsatian aspect of the dish. Soufflenheim has been connected to pottery since the Bronze Age, and workshops there continue the tradition by making bacheofe terrines. Like the dish itself, the glazed and ornately painted covered casseroles are unique to the region.

“Bacheofe is even more Alsatian than choucroute,” Soltner told me. “There is nothing like bacheofe in other places, but versions of sauerkraut you find all over.”

If bacheofe remains lesser known than the iconic choucroute, that may be due to its relative youth. As cookbook author Sue Style notes in A Taste of Alsace, potatoes didn’t become a regular part of the regional diet until the early 1800s, so bacheofe doesn’t appear in the earliest Alsatian cookbook, La Cuisiniere du Haut-Rhin, published in 1842. When I reached Style at her home in Alsace, she speculated that the dish came of age only in the mid-19th century.

Soltner and I retreated to his office to watch a YouTube clip from a 1994 episode of Julia Child’s television series Cooking with Master Chefs, in which Soltner cooked bacheofe. The chef, smiling, nodded in agreement as his screen self cut through the dough seal and, inhaling, remarked, “It smells beautiful.”

Back in the classroom, students were circling like vultures, lured by that same aroma. Soltner pulled the terrine from the oven and popped off the lid. His bacheofe was homey, stick-to-your-ribs food, the broth thick, the taste deeply savory, the fragrance heavy with wine and rich meat. I had to try making it at home. But since finding pigs’ tails had proved difficult to begin with, I called Vongerichten and another chef from Alsace, Hubert Keller of the San Francisco restaurant Fleur de Lys, and asked them for their recipes, hoping for something simpler. Keller told me that his stew includes the trotters but not the tails, and its flavor is sharpened with juniper berries. The differences between his rendition and Soltner’s call to question the notion of tradition when making a dish that is derived from whatever a matriarch had in the larder in the not-too-distant past.

“You can be really flexible with this dish,” Keller assured me.

I decided to riff off a version Vongerichten suggested: just diced lamb and vegetables simmered in wine until tender. At the last minute I wanted to add some bacon as a nod to Soltner, but all I had in the fridge were a few slices of prosciutto, so I shingled them on top. As the dish cooked, instead of summoning my inner Alsatian and doing much-needed laundry, I took a nap. When I woke, the house was filled with the inviting smell of wine and stewing onions, an aroma that has filled Alsatian houses for centuries. I scooped out a steaming bowlful. The lamb was tender, the potatoes buttery, the broth potent, and the prosciutto crisp and salty. Just like that, I had added my own version of bacheofe to my repertoire of winter stews.

See the recipe for Bacheofe »