A Californian bakes up an Italian holiday treat. 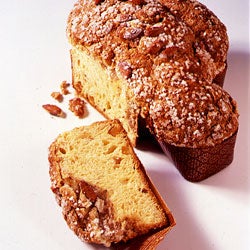 In 1983, after two years of apprenticeship at pastry shops throughout northern Italy, Gary Rulli returned to California with an unusual souvenir: A baker in Milan had given him a recipe for the mother dough used for many popular Italian holiday specialties—and, more important, a sample of the starter.

Today, Gary and his wife, Jeannie, own Emporio Rulli, a pasticceria in Larkspur, California, and three caffes in San Francisco, one being in the San Francisco Airport. The Rullis sell an array of Italian treats (from gelati to zeppole) in their shops, which is outfitted with mahogany-and-marble display cases crafted in Siena. But there’s an even more authentic piece of Italy in Rulli’s kitchen: He still bakes with the starter he was given back in 1983.

Unlike common yeast, this starter imparts a moister crumb to sweet breads like colomba pasquale (literally, “Easter dove”), a dove-shaped confection usually served with spumante after Easter dinner. According to legend, a colomba baked by a local maiden was presented as a peace offering to Alboin, king of the Lombards, when he captured Pavia, near Milan, in A.D.. 572. Alboin was so enamored of it (or of the baker?) that he made the city his new capital. At least, that’s one version of the story.

Gary Rulli now bakes 400 of his own colombe pasquali every spring. He allows his dough to rise three times, which means the loaves take 72 hours to make. His Italian starter, though, is just the beginning: He uses candied orange peel from Piedmont, sugar crystals from a confectioner in Genoa, and paper molds from a factory on the shores of Lake Como.