Eels are a strange, wonderful, and increasingly rare wild food. 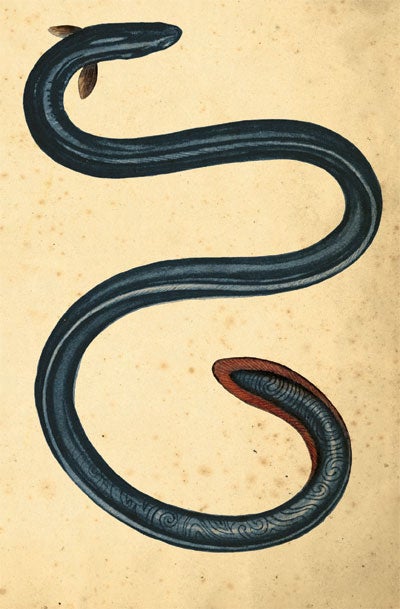 When I was a teenager, sometimes on summer nights, my friend Joe Haines and I would catch eels, wading into a tidal creek where flounder and crabs scuttled over the mud and sand flats. I’d hold the bucket, and Joe would wield a tridentlike eel spear, not impaling the eels, but pinning them between the tines. The beam of my flashlight cut through the wavelets to the creek bottom, where eels would appear as if out of nowhere, mysterious and sinuous.

I grew up in Fairfield County, Connecticut, a series of New York commuter towns where most people didn’t forage for their food. Joe Haines was an exception. A game warden who patrolled the land around the local reservoirs, he spent his working days outdoors and his free time hunting and fishing. I met him when he caught me, a 14-year-old trespasser, fishing illegally in the Aspetuck Reservoir, near my home. Instead of busting me, he took me under his wing. He lived mainly off what he shot, hooked, and grew in his garden.

Joe skinned the eels we caught, slicing around their heads and pulling the skin back like a sock from a foot. Then he cut the grayish blue meat into chunks, leaving the spine in the center, dusted it with garlic salt, and grilled it over charcoal. The eels’ copious fat dripped into the flames, causing them to jump and char the meat. We ate each chunk like corn on the cob, chewing around the spine; the meat was dense yet delicate, with a flavor like a cross between seafood and meat. There were always more eels to eat in the fall, when migrating adult silver eels heading out to sea to spawn were caught in the screens on the intake valves in the Saugatuck Reservoir dam. Around late September, Joe would get a call from the dam workers offering him the eels. They knew no one else would want them.

My teenage fascination with eels only grew over the years, compelling me to learn more about these fascinating and, in many respects, baffling creatures. The freshwater eel is one of the only fish that breed in the middle of an ocean but spends its adult life in rivers, lakes, and streams, a migration pattern known as catadromy. (Salmon and shad, anadromous fish, migrate in the opposite direction, from freshwater to salt water, once they’ve hatched.) The eels I caught as a teenager in Connecticut were spawned some 1,500 miles away in a seaweed-choked part of the Atlantic Ocean called the Sargasso Sea. Once they hatch, in the fall, tiny eel larvae shaped like willow leaves drift in ocean currents toward North America and Europe, presumably by the billions. By the time they reach the coasts, in spring, they have metamorphosed into a miniature form of their adult, snakelike shape and have entered the mouths of rivers as transparent, matchstick-size creatures called glass eels.

How these young eels then disperse themselves across a range as vast as that from Canada’s St. Lawrence River to the Gulf of Mexico is entirely a mystery. Researchers have learned that only the most formidable of barriers—man-made dams, primarily—have kept eels from entering freshwater rivers, lakes, and streams. Eels can even travel over land on wet nights, absorbing oxygen through their skin; baby eels are said to be able to form braids, entwining their bodies to overcome walls and other obstacles. Once in freshwater, they feed and grow for ten to 30 years before making the return journey to their birthplace to spawn. To this day, no one has witnessed adult eels spawning in the wild; we know where they are born only because eel larvae have been netted within days of hatching out in the middle of the Sargasso. Once the adult eels have made their way downriver and into the sea, they disappear, as described by naturalist Rachel Carson, “almost from human knowledge.”

Over the last century or so, eel has vanished almost as completely from the American table—incredible when you consider that it was once a North American staple, sustaining native peoples throughout the eastern coastal regions. Rich in nutrients, eels were a crucial source of sustenance for the early European colonists, too. The Pilgrims made landfall in what would become Plymouth Colony, in Massachusetts, in the winter of 1620, and by the following spring, half of them were dead from starvation and disease. Those who remained signed a peace treaty with the Wampanoag confederation of Native American tribes on March 21, 1621, and the next day, Squanto, an emissary from the Wampanoag leader, Massasoit, arrived to teach the newcomers how to forage for food. Their first lesson: how to catch eels. The fish remained a widely popular food up through the 19th century, and in Dutch, German, and Italian immigrant communities well into the 20th.

I’ve traveled to other parts of the world where eels are still embraced as enthusiastically as they once were here. In southern Sweden, on a crescent-shaped segment of the Baltic Sea coastline known as the Ålakust, or eel coast, I visited fishing huts where fishermen host alagillen, or eel parties, in autumn. They grilled their big Baltic eel over wood until its skin crackled, smoked it and dressed it with lemon to counterbalance the meat’s richness, and served it up in at least a dozen other delectable ways. In the Basque region of France, I had translucent baby eels that were plunged in hot water, sauteed in olive oil and garlic, then served scalding hot with a wooden fork, so as not to burn the tongue; they had the texture of angel hair pasta and a flavor both sweet and umami, with a hint of the sea. In Japan, where eel meat is considered a cure for natsubate, or the fatigue brought on by summer weather, I went to eel-only restaurants specializing in a preparation called kabayaki, in which an eel is cleaned, halved, and skewered with its skin on, soaked in water, then laid over a hot wood fire to steam. (Eel is never served raw because its blood contains a toxin that must be cooked in order to be neutralized.) Once the full-flavored, succulent meat is cooked, the chef glazes it with a sweet sauce of soy, mirin, and sugar, and sprinkles it with sansho, a relative of Sichuan pepper.

The version of kabayaki we get in sushi restaurants in the United States is a pale cousin in comparison, but that is eel as most Americans know it now—if, in fact, they know it at all. The eel we mainly eat makes a journey even more implausible than the one dictated by the fish’s inborn urge to breed in the middle of the ocean. In a man-made perversion of the eel’s natural migratory patterns, an eel served in a restaurant in Manhattan was most likely caught early in its life in the mouth of a river in Maine or the Basque region of Spain and France and flown live to a farm in China, where it was raised to edible size, cleaned, cooked, packaged, and shipped back across the world to New York. A vast proportion of North America’s eel population is whisked off in this way, before it can commence life in freshwater, let alone mature and eventually return to the sea to spawn. Overfishing, hydropower dams that hinder migration, pollution, and possibly changes in ocean currents due to global warming have further contributed to the species’ sharp decline.

Still, eels continue to make their inexorable journey each autumn down American rivers and out to the sea, and if you know where to look, it’s possible to eat eel caught locally and sustainably. The white-bearded and hermitlike Ray Turner of Hancock, New York, continues to catch eels as they’ve been caught for centuries at a secluded spot on the east branch of the upper Delaware River called Eel Weir Hollow. He intercepts them in a V-shaped stone enclosure, or weir, that he rebuilds himself, stone by stone, every year. Turner hauls in his entire annual catch—totaling about a ton—in just two or three autumn nights. He brines the eels in salt, brown sugar, and local honey, then he hot-smokes them. Customers include restaurants such as Dan Barber’s Blue Hill at Stone Barns, in Pocantico Hills, New York, and a few retailers, as well as passersby, who find Turner’s smokehouse via signs nailed to trees along the road. But Turner is always sure to keep some of his product for his own table. “I consider the eels to be the best quality protein in my line,” he told me. “The other fish I smoke, trout and salmon, are farm-raised. The eels are wild.”

Of course, there is always the option of catching wild eels by hand and preparing them yourself, which I still do whenever I can—though I would caution that eels, and an appetite for them, are not easy things to subdue.