Fruit of the Future

Is the world headed for a banana revolution? 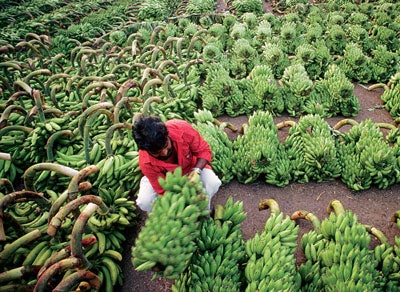 More than a century ago, when the American palate was just beginning to develop a taste for adventure, a single entrepreneur started a revolution. He took a strange tropical fruit—a product whose very shape made it taboo—and set out to make an entire nation fall in love with it. His task extended beyond seduction. He had to invent ways to bring this perishable produce thousands of miles, from the jungles of Central America, where it was grown, to greengrocers in the United States, without its spoiling. And because he wanted to sell it to everyone—his proclaimed ambition was to make the fruit more popular than apples—he had to do all of this at incredibly low cost.

The product, of course, was the banana; the entrepreneur was Andrew Preston. He was a marketing genius. To counteract the sexual suggestiveness of the banana, he printed postcards that featured proper Victorian women dining on it. To get people to eat the fruit for breakfast, Preston persuaded cereal companies to offer coupons—the first time this was ever done—for free milk, redeemable only by those purchasing bananas with the cereal. And he published scores of recipe books containing all sorts of creative preparations (ham-and-banana scallops, anyone?). It didn’t hurt that the product tasted good. Indeed, by the 1920s, Preston’s mission was accomplished: the apple had fallen into second place.

The company founded by Preston in 1899 was called United Fruit. The product it was built on is still the most popular, and most affordable, fruit in American supermarkets. We consume more of it than we do apples and oranges combined. The corporate empire Preston created has proved just as enduring, and it still sells more bananas than any other purveyor in the world. Today, the name of the enterprise is Chiquita.

But as familiar as we are with it, there’s something unusual about the banana. Take a look around you the next time you’re in the produce section of the grocery store. Start with those second-place apples. For a runner-up, there’s a lot going on: Fujis and Braeburns and Galas, among other varieties. At my local supermarket, shoppers can also treat themselves to four kinds of orange, three cherry varieties, and two different kinds of mango. But bananas? The banana never varies. Except for an occasional oddity—a red version of the fruit, or a miniature variety—there’s no choice at all: just the same, everyday partner to the cornflake.

Anywhere on earth where it is warm and wet, you will find bananas. You will find them in backyard gardens in Southeast Asia and China, on farms in India, and on industrial estates in Pakistan. The fruit grows in the Philippines, Australia, Papua New Guinea, and Hawaii. It feeds millions in Africa. In this hemisphere, the fruit grows in nearly every nation south of our own.

A single, mild-tasting cultivar, called Cavendish, constitutes half of the world’s banana crop, and most of those bananas are destined for export to countries and cities where the fruit can’t grow. Everywhere else, you’ll find local bananas—exotic to Americans, but standard, beautiful fare for the people who eat them. How many types make up the non-Cavendish half of the world’s crop? Nobody knows for sure, but the generally accepted number is a thousand.

As I’ve discovered during several years’ worth of travels while researching a book on bananas, you cannot walk ten feet in most banana-growing nations without encountering a banana or a banana tree—which isn’t a tree at all but an herb, the world’s largest. On a Philippine street corner, a few pennies buys a red-skinned Lacatan; to a palate accustomed to Cavendish, it is heaven: creamy and rich, with a taste like homemade ice cream. In India, where roughly 670 varieties of banana grow—more than in any other country—nearly every village has its own preferred type. The variety called Rasa Bale, from the region around the city of Mysore, has skin as thin as paper and an alluring, floral taste. Vikram Doctor, a columnist for the Economic Times of India who has been known to write about local bananas with the flair of a wine critic, prefers the Rasthali, whose “plumpness, almost bursting out of their skins, makes them great to bite into, and their texture is creamy, and taste complex, with interesting fruity notes.” The banana capital of our own side of the world is Brazil. At a sidewalk cafe in the city of Manaus, I was served a pastry that tasted like apple strudel—but was filled with bananas. It was made with the Maça variety; I found out that the Maça belongs to an entire category of “apple bananas,” whose firm texture and tartness evoke the namesake fruit.

During a trip to Vietnam, I spent a day hiking a steep mountain that rose above an island in Ha Long Bay, several hours north of Hanoi. As the trek ended, my companions and I approached a village of cinder-block houses; before each one stood a single banana tree. I stopped in front of one of the houses and inspected the fruit; it was stubby and thick, the shape of a soda bottle. After a few moments, a teenage boy peered out the front door. Then he ducked inside and returned with a plate of ripe bananas. I mimed my thanks and started peeling one. The skin was thicker than that of a Cavendish, and when I bit into the fruit, I found that the flesh didn’t yield easily. This firm banana was strikingly tart, then subtly sweet. It had complexity.

I never had a chance to find out what the banana was called. But it probably wouldn’t have mattered. Villages like that one generally grow one kind of the fruit, and the name the villagers usually give their variety is almost always the same: they call it banana.

Americans once enjoyed better-tasting bananas. The fruit that our early desires were built on wasn’t the Cavendish but another variety called Gros Michel, or Big Mike. It was bigger and tougher-skinned than the Cavendish, with a more intense flavor and a smoother texture. Big Mike was a great banana. It met all the criteria Andrew Preston had needed to invent an industry. It was so rugged that it could simply be thrown by the bunch into cargo holds and shipped to American ports. For the most part, all it required was a little refrigeration to keep it from ripening too fast.

Big Mike had a problem, though. In the early 20th century, not long after Americans had become enamored of it, a mysterious disease began to destroy plantations. The malady—finally identified as a fungus and named Panama disease—was ineradicable. At first, this was only a minor concern for growers. All that needed to be done was to move farms to virgin soil. There was plenty of land in the Latin American countries where United Fruit and its chief competitor, Standard Fruit (now Dole), operated, though that land often needed to be taken by force. (Such military interventions, assisted by the U.S. government, led to the coining of the term banana republic, which described a nation controlled by the fruit companies.)

But by the 1950s, new land couldn’t be bought, even with blood. The banana we’d fallen in love with disappeared, a victim of a monoculture that offered no protection against disease. Its plantations devastated, United Fruit, by this time called Chiquita, was near bankruptcy. It had experimented with the Cavendish, a hybrid that was immune to Panama disease, but company executives hated the variety. Compared with Big Mike, the fruit was so bland tasting that marketers were sure American housewives would reject it. And the Cavendish had other problems. It bruised easily. It ripened too fast.

Eventually, by the 1960s, United Fruit came to terms with reality: it was Cavendish or nothing. The adoption of the new cultivar required a massive technology shift. Big bunches had to be separated into smaller ones, then bagged and boxed so they wouldn’t bruise. In order to forestall ripening, a mixture of gases had to be pumped into the holds of the ships that carried the fruit to U.S. ports. As for the bananas’ taste, industry heads decided that it didn’t matter. To judge from the subsequent success of the Cavendish, they were right.

It’s not that Americans have lost their taste for exotic produce. Chiquita and Dole, in fact, frequently import new-to-the-market tropical fruits. But a shake-up in the banana sector hasn’t happened. The entire banana supply chain is tailored to Cavendish and only Cavendish, and at 60 or 70 cents a pound, that banana makes the introduction of other, less abundant kinds economically unfeasible. No other fruit costs less than bananas, and unlike the domestic farmers who have found enthusiastic customers for obscure and expensive heirloom varieties of apples or tomatoes, entrepreneurs interested in promoting lesser-known banana varieties don’t have local producers to turn to—only an entrenched plantation-based industry. In the minds of fruit company executives, these facts all but guarantee that our definition of the banana will forever be equated with the single variety we’ve been accustomed to for decades.

Change may happen anyway. Panama disease has returned, and this time Cavendish is not immune. A variant of the fungus has begun to destroy Cavendish plantations across the globe. It first emerged in Malaysia in 1985 and has since spread to China, India, Pakistan, and across the Pacific, as far south as Australia. So far, this new version of the banana’s old enemy has yet to hit Latin America, which is still the primary supplier of Cavendish bananas to the U.S. But most scientists believe that it will.

Today, much of the creativity that the banana industry exhibited when it first began marketing the fruit has vanished. Nowadays bananas are anything but exotic, and much of the fruit companies’ present marketing efforts are dedicated to promoting slightly pricier organic Cavendish bananas (farmed without chemicals on small farms), or to positioning the product for sale in convenience stores, as a healthful snack.

But imagine a new era. Imagine being able to serve a Ugandan matooke—the comforting dish of steamed plantains eaten all across Africa’s central and eastern highlands—using that country’s native Mongo Love banana. Imagine tasting a coconut-, cardamom-, and raisin-stuffed Nenthra Pazham from India’s Kerala state, without leaving home. Imagine your kids getting their daily potassium from a sweet, bright-orange banana grown on the island of Pohnpei, in Micronesia. Cultivating such bananas would encourage growers to experiment with new shipping and ripening technologies. As with coffee, higher-priced cultivars could mean improved profit margins and better benefits for laborers. A diversified crop would provide a hedge against disease.

If the big banana producers can’t do it, perhaps smaller companies can. Alternative varieties are finally making inroads via specialty distributors, and other companies are striving to improve the old Cavendish. A newly launched Florida importer has begun to sell a better-tasting version; its bananas are rush-processed and thus exposed to less taste-deadening anti-ripening gas. And there certainly must be businesspeople in India who could find a way to bring that country’s considerable entrepreneurial energies to bear on its riotous stock of native fruit. Of course, conventional wisdom says that too many technological hurdles exist for a new kind of banana to make it to our shores in great numbers.

That’s what they said about Cavendish.