King of the Street

In Israel, felafel, served with piquant sauces and fresh salads, is the snack that rules. 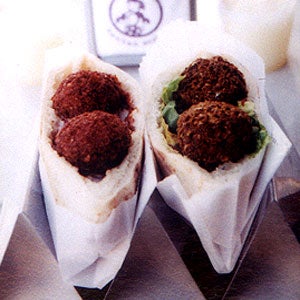 The first time I walked down the streets of Israel I was still an adolescent, and felafel—delectable crisp-fried croquettes of spiced ground chickpeas stuffed into a pita, loaded with bright salads and dripping with sauces—was something new and wonderful to me. I nibbled it on my way home from art classes in Jerusalem and munched it on Saturday evenings while hanging out in Tel Aviv. When I lived on kibbutzim in the Negev and in Galilee, felafel was what we treated ourselves to when we went into town.

I have since traveled the world, and so has felafel. I’ve eaten it from New York City to Bangkok to the Spanish ”party island”of Ibiza—where I found a felafel man setting up his stand as the sun rose. And when I returned to Israel recently for the first time in decades, eating felafel was one of the first things I wanted to do. In Tel Aviv I walked down Dizengoff Street, the happening heart of the city. The night was warm and damp in that particularly Mediterranean way, girls walked arm in arm, violinists played classical music in front of cafes—and I met a parrot who said ”Shalom”and tenderly pecked me on the cheek.

Then I turned onto King George Street and sat down at a little table under a leafy tree for the first felafel of my return. A soldier in a skullcap sat next to me and a friendly dog settled at my feet, hoping for leftovers. I ordered my felafel, heaped it with condiments, then bit in. The pita was soft and warm, the felafel crisp, and the salads—so fresh, so vivacious! I thought about ordering another as I wiped the juices from my chin.

Felafel, thought to have originated in Egypt thousands of years ago, is now a staple snack throughout much of the Middle East. What makes the Israeli version distinctive is the huge variety of sauces and salads offered with it. The standard sauces are tehinah (sesame-paste sauce) and harif, a generic term meaning ”hot”, for whatever spicy sauces the stand happens to have on hand—typically zehug (Yemenite hot sauce, either green, with cilantro and green chiles, or red, with dried red chiles and garlic) or an Israeli version of harissa, a fiery North African condiment. There’s also amba, a sort of liquefied mango pickle with plenty of turmeric and fenugreek, probably Indian in origin. Chopped cucumber and tomato are the traditional salad accompaniments to felafel, but fried eggplant, fried potatoes, and pickled turnips, among (many) other things, are also likely to be available.

Felafel was already being eaten in what is now Israel in the early 1900s, when Jewish immigrants were arriving from Russia and other parts of Eastern Europe. These newcomers, some historians say, were eager to leave behind their old life—including their cooking—and indigenous food appealed to them, for it held the taste of a fresh start. Then, in the early days of Israel’s nationhood, after 1948, everyone, everywhere, seemed to be on the go: Immigrants from war-torn Europe were streaming in while soldiers shifted around the country, defending its borders. People needed something quick, tasty, and cheap to eat—and that was felafel. Storefront stands multiplied across the country to satisfy the demand. Felafel grew spicier as Sephardic Jews added turmeric and more hot chile to the basic recipe, Eastern Europeans added sauerkraut to the presentation—and felafel became the food of a brave new people.

Exactly what makes good felafel? Every Israeli has an opinion—or two! But all agree that the pita must be soft and supple, the oil fresh, and the felafel freshly fried so that it’s crisp and enticing rather than leaden. As for accompaniments…Well, that brings me back to my own explorations of felafel. In my day, felafel stands did serve some vegetable garnishes, but now they offer so many that they resemble salad bars. Such bounteousness has a history: In Tel Aviv’s Bezalel market a number of felafel stands sprouted in the 1960s, all fiercely competitive. Each began offering new items to distinguish itself from its neighbor, and gradually the stands came to be decorated with whole towers of pickles, salads, and relishes. Meanwhile, it seems, similar lavishness was spreading throughout the land. Today there’s only one felafel stand, Felafel Yosef, left in the Bezalel—the rest have been crowded out by the clothing stalls that have become the market’s raison d’etre—but it upholds the tradition: The condiments include zeh.ug (red and green), amba, teh.inah, pickled cabbage in three hues (red, yellow, and white), sliced bell peppers, sliced tomatoes, fried battered potatoes, fried eggplant, cucumber salad, and pickled hot peppers.

Not far from Dizengoff Street I found a much simpler but very good felafel stand called Dr. Sa’adyah, which serves up tiny felafel garnished with green Syrian olives, pickled peppers, pickled cabbage, and the tomatoey egg-vegetable ragout called shakshukah. Also in the city’s center is what may well be Israel’s first postmodern felafel stand—Malkot ha-Felafel, ”The Felafel Queens”(a sassy play on Melekh ha-Felafel, or ”The Felafel King”, a ubiquitous felafel-stand name). Created by Orna Agmon and Ella Shine, who also own the trendy Orna & Ella restaurant nearby, the stand is crisply, attractively contemporary and offers green felafel—made with parsley and cilantro, and garnished either with tomatoes, cucumbers, pickles, and teh.inah, or with black olive spread, green zeh.ug, pickled zucchini, lettuce, arugula, and teh.inah. Or there’s an unusual red felafel, made with several kinds of peppers and served with a roasted-red-pepper spread, tomatoes, and yogurt sauce. Both taste great with the house cocktail—frozen grapefruit juice spiked with potent anise-flavored arak.

In my opinion, felafel has only improved over the years. All the added salads don’t detract from it; they enhance and lighten it. And it remains a universal pleasure in the Middle East: It blends a range of ethnic flavors and appeals to all classes and all faiths. Jews, Muslims, and Christians, religious and secular, meat eaters and vegetarians, old and young, rich and poor—everybody eats felafel.