To a boy in need, a sandwich can mean the world 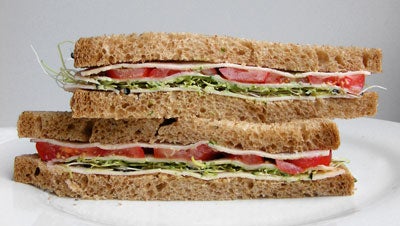 "No lunches or dinners in my life have been more memorable than sandwiches with my uncle Ray Mock, when I was a boy." Read Dean Koontz's essay, "Lunch Lessons". Flickr member FotoosVanRobin, CC licensed
SHARE

No lunches or dinners in my life have been more memorable than sandwiches with my uncle Ray Mock, when I was a boy. They were simple fare that he prepared and wrapped in wax paper: sliced chicken breast and Swiss cheese on white bread with crisp lettuce, mayonnaise, and a sprinkle of pepper; cold roast beef on whole wheat with sliced tomatoes and two varieties of mustard. On the side might be pickles or potato chips, or hard-boiled eggs, or sometimes cupcakes. He had probably never heard the words haute cuisine, and neither had I. Those sandwiches are fixed indelibly in my memory because of one additional condiment that always came with them: wise and caring companionship.

I was a lonely kid in need of a male role model, of which there could be none better than Uncle Ray, if only because of his humility and unfailing kindness. He had served in Europe in World War II, but he was so modest about matters of courage that he never spoke of his wartime experiences. When pressed on the subject, he would say only, “When you’re drafted, whatever you do after is what you have to do, there’s nothing you can take credit for.” Years later, I learned (not from him) that he’d volunteered.

His wife, Kate, my mother’s youngest sister, could be ebullient and delightful one day but sullen and argumentative the next. She was most likely an undiagnosed manic-depressive, and she sometimes belittled and even disrespected him in front of other people. I never heard him respond in kind. He always treated her with courtesy and deference, and if anyone commiserated with him later, he would cut them off and say only, “Oh, that’s just Kate, she doesn’t mean any of it.” He might have had only a high-school education, perhaps not even that, but his common sense in this matter and in all others made him wiser than any graduate of an Ivy League university that I’ve ever known. Besides, he not only built great sandwiches, but he also taught me valuable, fundamental lessons about food and love.

Although Uncle Ray meant a lot to me, I’m not sure I ever told him that I loved him. Love was a suspect word to me when I was young. Because my father was an alcoholic with a tendency to violence, a gambler, a womanizer, and by professional diagnosis a pathological liar, he devalued the word love with his behavior. He said he loved my mother and me, but he betrayed us repeatedly. Every time that he lost the mortgage payment in a poker game, he claimed to have done it out of love, hoping to get lucky so that he could give us what we deserved. When he did win, the proceeds invariably were spent on drink and women. As a consequence, I seldom said I loved anyone, until I met Gerda, who became my wife and who, by the nature of her heart, restored meaning and value to the word. Even my mother, who was a gentle and loving soul, seldom used the word love, as if the hostile atmosphere in that house caused in her, too, a perpetual allergic reaction, a kind of anaphylactic shock, in which expressions of affection stuck in the throat.

Uncle Ray was a mechanic who worked on Macks and Peterbilts for a trucking company. He was about five foot seven, not heavy but with a sweet round face, good-looking in the way Lou Costello was more handsome than you realized when you were laughing at his shtick—and Uncle Ray always made me laugh. He was a man’s man but also the softest-hearted guy I’ve ever known, not maudlin but sentimental in the best sense. He knew that I was growing up virtually fatherless, and he often took me with him on errands, hours that still shine in my memory, although we were doing nothing more than visiting a hardware store, a dry cleaner, and a sporting-goods shop.

Often he brought with him a big lunch box in a cooler. Partway through the errands, he would find a place to eat—on the bank of the river that passed through our town, on a bench in the memorial park, on the steps of a house that he was building and where I sometimes helped him by doing menial labor. Occasionally, he would take me to his favorite bar and order sandwiches, plus a beer for him and a Coke for me. In a busy tavern where he had friends, his attention remained on me as completely as when just the two of us sat on a grassy bank and watched the river as we had our lunch.

Uncle Ray, a devoted hunter, provided us with much of the meat we ate—but that had a downside. By the time I was 15, I had eaten so much venison, rabbit, and squirrel that I was forever put off all meat with a game taste. To this day, a single bite of even lamb nauseates me, perhaps because I associate the taste with poverty and with the joyless house over which my troubled father presided.

Twice, when I was 11 and 12, Uncle Ray and I dressed a deer together, which still astonishes me. I am squeamish about blood and can’t imagine how I endured that procedure, which is so grisly it’s usually conducted in one’s underwear. In spite of my antipathy to a butcher’s work, and in spite of the fact that I’ve always known I don’t look good in my underwear, Uncle Ray made the experience an adventure, although the memory of it is another reason why I can’t any longer tolerate game meat.

When he enlisted me in the dressing of a deer or the beheading and plucking of a turkey, he would make the point that our food isn’t just something we buy, that if we don’t labor directly to produce it, we need to remember that others do labor to provide it for us and that often their labor is of an unpleasant kind that we prefer not to do ourselves. This is true not just of the food we eat but of everything we need in life, and it’s a truth about which we become ever more ignorant as our technological progress steadily distances us from the sources of life’s necessities.

In canning season, I rode with Uncle Ray while we collected peach peelings from folks who were putting up fruit for the winter, and I assisted him in his basement when he brewed what he called “peach brandy.” The lids on the fermentation crocks needed to be adjusted regularly to relieve excess pressure; otherwise they would blow off, and geysers of peelings and yeasty water would splash across the low basement ceiling. This happened a couple of times, but never when I was present. Uncle Ray once so thrillingly described a 2:00 a.m. fermentation-crock blast that I lobbied (unsuccessfully) to be allowed to sleep in his basement in order not to miss another such spectacle if it occurred.

He allowed me to have a taste of the finished product now and then, but never a full serving. He talked about how a thing could be delicious for a glass or two, but flavorless thereafter, and he told me stories that had nothing to do with adult beverages but that years later I realized had been lessons in temperance, such as the unlikely story of a long-distance runner whose weekly marathons kept him in tip-top shape until he developed an enlarged heart from over exercise and soon after died.

Before making a sandwich, before dressing a deer, before setting out to brew peach brandy, Uncle Ray washed his hands, although not as anyone else might wash theirs. He was self-conscious that even when his skin was red from nearly boiling water and even when the white suds from the soap dripped clean into the sink, the creases of his knuckles were still dark with the lingering traces of grease and oil. They were the hands of a man who worked hard for a living, and what remained after the soap was not grime but instead mere stains, as a printer might be marked by the ink of his presses. He worked at his knuckles with a brush that further reddened his skin, and he might take five minutes at the sink, though after two his hands were as clean as those of a surgeon.

Sometimes I see him in my mind’s eye or in a dream, at a sink with brush and soap, and there is something sacramental about his routine and a sacred quality to the memory. He is a good man, humble and kind, scrubbing his hands not just to make a sandwich, but readying himself for an encounter with the divine, which he would never presume that he was worthy enough to have earned. There is a tender truth that I have realized only after decades of living: We are often blind to the fact that we are in the presence of grace, and that whether we are having a sandwich on a river bank or on a park bench, we ought always to remember that maybe, just maybe, we are in the company of saints potential.

See all of the 25 Greatest Meals Ever