Behind the clever guises of a beloved breakfast dish 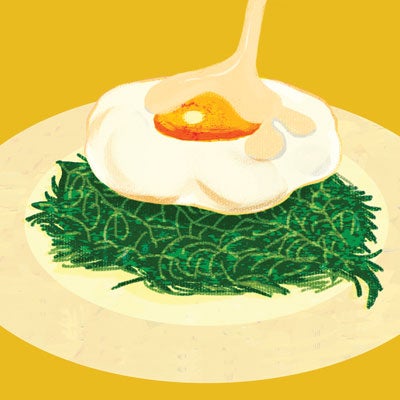 Eggs Florentine recipes vary so much that the only constant seems to be the spinach. Which recipe is the original one?-Pam Schmidt-Curren, San Lorenzo, California

Why the French, who coined the phrase a la Florentine, associated spinach with Florence is not fully known, though some say the style of dish was named for the birthplace of Catherine de Medicis, who introduced the leafy green into Gallic cuisine with her marriage to France’s Prince Henry in 1533. Dishes prepared a la Florentine almost always include spinach and are often topped with a mornay-or cheese-sauce. Most early recipes for eggs Florentine simply paired those ingredients with poached or baked eggs. Later versions strayed from that formula. Some recipes called for hard-boiling the eggs, others for scrambling them. Yet others interpreted the dish in an altogether different manner. In his 1898 cookbook, Eggs, and How to Use Them, Adolphe Meyer, chef at Manhattan’s exclusive Union Club, went so far as to describe “eggs Florentine” as eggs dressed in a chicken and mushroom cream sauce poured over not spinach but the bottoms of artichokes, another food introduced by Catherine de Medicis.