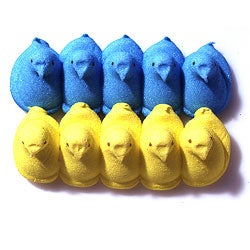 Peeps, those cute, bright, irresistibly squishy chick- and bunny-shaped marshmallow confections—as emblematic of Easter as bonnets and baskets and pastel eggs—pop up every spring at candy counters and in grocery stores nationwide. Though not as revered as their chocolate-coated cousins, these critter-shaped confections have a loyal following—in recent years, Peep appreciation has even gone high-tech.

“Take two Peeps, stick toothpicks ‘under their wings’ as if they are brandishing lances. Point them face-to-face in the microwave, place your wages, and hit the ‘on’ button.” Thus begins a Peep Joust, one of the many little-known Peep pastimes we discovered while perusing one of the many little-known Peep websites on the Internet. (The duel ends when one of the combatants expands enough to engulf its unlucky foe.) We ran across lots of other Peep activities online, as well as Peep recipes, facts, and myths. There are even a few Peep forums–safe outlets for expressing one’s heretofore secretly held Peep passion—and answers to virtually any Peep question you can think of.

For instance, the original Peep, a hand-sculpted yellow chick, was created sometime early this century and sold by Rodda Candy, a company based in Lancaster, Pennsylvania. Just Born, the company responsible for such sweet innovations as chocolate jimmies (those sprinkles found on doughnuts and ice cream sundaes) and the Born Sucker Machine (Sam Born’s revolutionary 1916 lollipop maker), bought the Peep concept in 1954 and has been cranking out baby birds and rabbits (which are officially called Bunnies, but are also known generically as Peeps) at its factory in Bethlehem, Pennsylvania, ever since. The company admittedly appreciates Peeps’ newfound celebrity in cyberspace, but is bewildered by the intensity of interest in this seemingly innocuous item, though they have added a list of the most-often-asked questions to the company press kit.

Despite the intensity of their interest, Peep enthusiasts are, like the rest of us, mostly nice and normal—even extremists like the two writers working on an unauthorized “Peepcyclopedia,” the fashion-forward types who wear Peeps as accessories, or the warmongers who make, and arm themselves with, Peepy Grenades (stick a Popsicle stick into the belly of a Peep, pull back, aim, and fire). But why all this mania for sugared marshmallows? Some attribute it to baby boomer nostalgia for Peeps-the world has changed, but Peeps, by and large, have not.

It’s not easy separating Peep fact from fiction, but this much is true:

• About 350 million chicks and 250 million bunnies will be produced this year.
• Peeps are made of sugar, corn syrup, gelatin, potassium sorbate, artificial flavors, and carnauba wax.
• Each Peep packs a mere 32 calories and 0 grams of fat.
• Many connoisseurs prefer their Peeps stale.
• In 1991, Peeps lost their wings for a sleek, modern look.
• It used to take 27 hours to make a batch of Peeps; the gelatin had to harden overnight. Today, with new technology, it takes 8.5 minutes.
• Peeps receive their colors when they pass through a sort of wind tunnel and tinted sugar blows around and adheres to their sticky bodies.
• Other seasonal Peeps include Spooky Cats, Happy Pumpkins, Christmas Trees, and Snowmen.