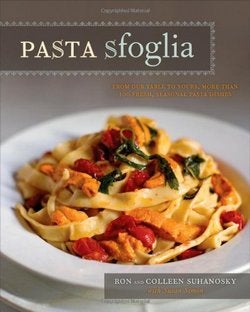 Chef Ron Suhanosky’s book Pasta Sfoglia won the James Beard Award this year for Best Single Subject Cookbook, so we weren’t surprised to learn from Publishers Weekly that he’s got another cookbook in the works. What is surprising though is that he’s publishing this one with micro-imprint Kyle Books, instead of with the team at Wiley that helped bring his first volume to Beardian victory. We can only speculate, but this switch might have something to do with Suhanofsky’s recently-announced split from the Sfoglia brand — the New York Times announced just last week that Suhanosky and his wife (and Pasta Sfoglia co-author) Colleen are no longer associated with the two restaurants they helped found, a split that the Times paints as less than amicable. Suhanosky’s new book will be titled The Family Table, and promises family-friendly Italian-influenced recipes for all.