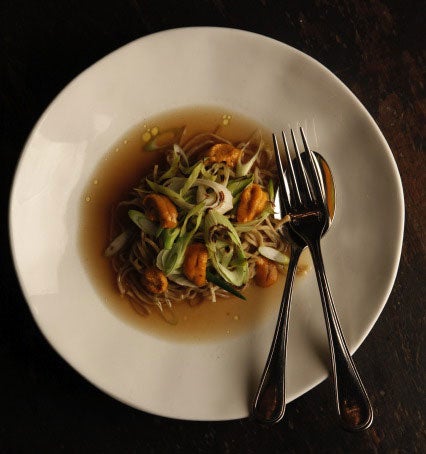 This spaghetti is bathed in a deeply flavored broth fortified with caramelized onions and kombu. Todd Coleman
SHARE

My love of simple, seasonal, regional Japanese food goes back to my early career cooking at Bistro Shima in Tokyo. On a return visit to Japan a few years ago, I fell hard for kombu, a glutamate-rich kelp that typifies the savory flavor known as umami. I add kombu to a rich onion consomme and serve it at Gramercy Tavern over locally grown and milled spelt pasta that’s similar to soba noodles. It’s a beautiful pairing. The kombu adds a discreet backdrop to the dish, not so much ocean-y as earthy. —Michael Anthony, Gramercy Tavern, New York City

See a recipe for Spelt Spaghetti with Kombu and Onion Broth »