Based on an old Narragansett Indian dish, succotash has established itself as a uniquely American offering. 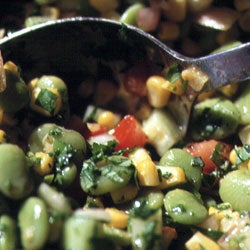 Lima beans were first cultivated in Central and South America several thousand years ago. By the 1st century A.D., an efficient system had been developed, in which the beans were planted in rows along with corn and squash. The corn stalks gave the bean vines support, the squash suffocated intruding weeds, and the beans produced nitrogen in the soil to help fertilize the corn. This method of cultivation, called the “Three Sisters,” made its way to North America with the beans themselves. Here, Indians adopted limas and used them in a dish that the Narragansett called msickquatash, meaning “boiled whole kernels of corn.”

European colonists discovered the dish, mispronounced it into “succotash,” and probably served a version of it at the first Thanksgiving, in 1621. The earliest recorded recipe for succotash calls for dried beans simmered with lean salt pork, then put in a pot of poultry broth along with turnips, potatoes, and dried corn.

Today’s succotash always includes lima beans and corn, but regional variations flourish. A Southern version, for example, adds okra, onions, and tomatoes; the Pennsylvania Dutch mix in green peppers, potatoes, and dumplings; in New York City, meanwhile, Sheila Lukins turns succotash into a fresh, cold salad. The best succotash of all, of course, is made in the summertime, when limas are fresh and the corn is sweet and just off the cob.