As a pumpkin pie-loving culture, Americans have grown up believing the flesh to be the most important part of the pumpkin. 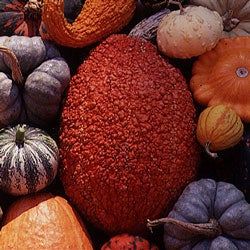 As a pumpkin pie-loving culture, Americans have grown up believing the flesh to be the most important part of the pumpkin. Originally, however, pumpkins were cultivated for their seeds. That was some 6,000 years ago in Mexico, where pumpkin seeds, or pepitas, are still dried (often in the sun) and used (with or without the shell, depending on the type of pumpkin) as a key ingredient in pipians— sauces first developed in the Aztec kitchen— and papadazules, an enchilada-like dish in the Yucatan. They are also used to thicken some moles and eaten simply as a snack: Soak seeds in cold water for 1 hour to loosen fibers. Rinse, drain, then spread on a cookie sheet and bake at 300°, shaking pan occasionally, for 40 minutes. Sprinkle with salt before serving.

Pumpkin seed oil may be a recent discovery for Americans (if your gourmet store doesn’t carry it yet, it will soon), but it has actually been made for more than 200 years in southern Austria, where folks took to dribbling the intense, nutty oil on bread. Seeds (it takes 33 pumpkins’ worth to produce one liter of oil) are roasted, ground, then cold-pressed in a process similar to that used for fine olive oil. In France, the seeds usually aren’t roasted, so the oil has a pure pumpkin flavor. Drizzle on soups or use in vinaigrettes.