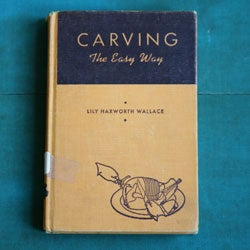 In this age of presliced spiral hams and supermarket chicken parts, most hosts, when faced with the job of carving a hulking side of beef or pork at the table, fret and falter, unsure of where to make the first cut. This is an ancient anxiety. As long ago as 1788, the Reverend Doctor John Trusler, in his work The Honours of the Table, wrote of the painful “[spectacle of a host] hacking for half an hour across a bone, greasing himself, and bespattering the company with the sauce”. The art of carving, once the domain of only a skilled few—maitre d’s, heads of household, and dilettante hosts—is now almost completely lost. It is a tradition worth reviving, though, if only so that we may regain our confidence and composure at the holiday table.

I too was once among the uninitiated. Come holiday time, I would display my roast, then whisk it off to the kitchen, where I could wield my knife in private. My education commenced when I started to notice the discarded tools of this noble art on my trips to antiques stores. Intrigued, I brought home a silver-plated carving platter, inlaid with a system of canals for catching rivulets of juice, and a gleaming bone-handled Sheffield carving set, complete with a knife, a two-pronged fork, and a sharpening steel.

Not knowing where to begin, I sought out and collected old books on the subject, mostly from the 1930s and ’40s (the last golden age of carving). Their names, like The Business of Carving by Bill Rhode (Macmillan, 1941), and serious manner gave me a sense of purpose. With time, my collection grew and came to include other books, like The Hotel Butcher, Garde Manger and Carver by Frank Rivers (John Willy, 1935), which approaches carving as a respected professional craft; Carving the Easy Way by Lily Haxworth Wallace (M. Barrows & Company, 1941), which speaks to ladies who lunch with a can-do home ec sensibility; The Art of Carving by the editors of House & Garden magazine (Simon and Schuster, 1963), which captures the last practitioners of the art in step-by-step photos; and Carving and Boning like an Expert by Oreste Carnevali (Random House, 1978), which compiles years’ worth of expert advice and wisdom from the former maitre d’hotel of the Four Seasons Restaurant in New York. Studying these books and their photos and illustrations, I memorized the location of joints and bones and gained a sense of anatomy that allowed me to carve with confidence.

Putting that knowledge into practice was another matter. The first, fateful strokes of my knife were hurried, leaving unappealing, jagged lines on the meat. Obviously a more graceful motion was in order. Once, during an attempt on a leg of lamb, every cut I made met bone; only later did I learn that you must have the butcher remove the tail and pelvic bones in order to let you carve it easily. Over time I found that no matter how much I initially struggled with a roast, my second stab at it was easier. It was a simple matter of “Practice makes perfect”. Now I’m able to perform at the table with proficiency and dignity, to the surprise and delight of my friends and family. It is as Trusler wrote: “Where the master or mistress of a table dissects a [roast] with ease and grace…they are not only well thought of, but admired.”