Cooking on a vintage schooner takes skilled and steady hands. 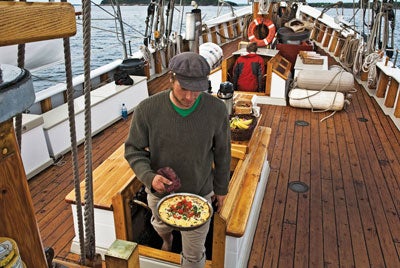 By the time the first of the six passengers aboard the American Eagle, a 92-foot schooner based out of Rockland, Maine, emerged from his sleeping berth, the boat’s cook, Robin Pietila, had been busy in the tiny galley for hours. She’d gotten up at four o’clock to feed kindling into the firebox that fuels the cast-iron oven and stovetop. It can take a long time for the stove to heat fully on a chilly morning like this one, and hot water needed to be ready for coffee and tea when the passengers awoke. Working a system of vents and flues, Pietila had channeled the heat from the firebox, now loaded with burning logs, to the stovetop. As soon as the water was boiling, she closed off the flue, forcing hot air into the oven, which she needed for today’s breakfast, a lobster frittata. After a few minutes, she opened the oven and stuck in her hand, holding it there for several seconds before yanking it out. “If I can keep it in there for just five seconds, I know it’s about 425 degrees,” she said. The oven is the same kind that was originally installed on the boat, almost a century ago, and has no temperature gauge.

I’ve seen chefs perform miracles in cramped restaurant kitchens, but I’ve never seen any cook do as much with as little as Pietila, a 52-year-old former teacher from southern Maine with no formal culinary training, does here on the Eagle. She and other galley cooks provide one of the paramount pleasures of sailing aboard a vintage schooner off Maine’s rocky shores, where a number of historic boats like the Eagle ferry paying guests up and down the coast. On a four-day sail from Rockland, I marveled at the dishes Pietila produced in her kitchen: from the fluffy, perfectly golden frittata to a delicious porcini-and-shiitake focaccia to fruit salads, turkey chili, and corn bread.

The Eagle‘s galley, an eight-by-eight-foot space in the forward section of the boat, is furnished with nothing more than the wood-fueled oven, an equally old-fashioned icebox (simply a wooden cabinet lined with tin and packed with ice), a U-shaped countertop, and a sink fed by a 1,200-gallon tank. But it’s not just the lack of space and amenities that poses a challenge. Pietila and her mess hand, 21-year-old Maine native Heather Brouwer, have to precook any baked dish that needs to set, like lasagne or brownies, before setting sail. When wind catches its sails, the craft heels, or tilts, to one side; brownies baked while heeling would be rock-hard on one side and pudding-like on the other. Heeling is especially troublesome when the ship is tacking back and forth to sail into the wind. On one such occasion, I observed Pietila scramble to hold everything she was making in place every few minutes as the warning “Tacking!” was shouted from above. Cabinet latches and a metal rail installed around the edge of the stovetop help in such instances, as do ceiling hooks, from which pots, pans, sifters, box graters, and the like can swing back and forth securely. But schooner cooks must rely heavily on their own ingenuity. Pietila, for example, wedges empty loaf tins into the oven to keep a pan of lasagne from sliding around.

According to the Eagle‘s captain, John Foss, the galley looks pretty much the way it did when the boat was first launched from Gloucester, Massachusetts, in 1930. Née the Andrew and Rosalie, it was the last fishing schooner to be built in that city, and it fished actively for more than 50 years before Foss bought it in 1984. He then put it through a massive restoration that made the vessel more comfortable for passengers while retaining a period authenticity. In addition to refurbishing the hull, sails, and masts, Foss moved the bunks, which once surrounded the galley, into the main cabin and the hold, which had been designed to carry 100,000 tons of fish. In their place he built tables and bench seats so that guests, who normally dine on deck, would have somewhere to eat during bad weather. Foss also increased the galley’s storage space: the benches double as bins for stowing flour, sugar, and oats.

When the Eagle first set sail 80 years ago, its galley cook was likely turning out meals made from salted meats, beans, preserved vegetables, and other nonperishable ingredients that weren’t too different from what New England fishermen had been eating for centuries. Today, the cooks who man the galleys of Maine’s vintage schooner fleet serve a more varied and ambitious menu, though many of the dishes—like the corn chowder ladled out for lunch on day three of our trip—remain rooted in Maine’s Down East cooking traditions.

The most elaborate meal of my journey came on the last night, when the Eagle anchored with several other refurbished boats for a party—or gam, in sailing lingo—near Vinalhaven Island. All of us aboard got to visit the adjacent boats, climbing from deck to deck over the rails on the schooners’ sides. Every vessel contained a galley similar to the Eagle‘s, with interesting variations: some, like the 95-foot-long Heritage, boasted a larger dining room belowdecks, and one, the Nathaniel Bowditch, had a skylight that could be opened to let in fresh air and vent the stove’s heat. Among the dishes I enjoyed on the boats were flaky haddock baked in a cream sauce, chicken with olives and capers, and strawberry shortcake. Well after sundown, we pulled anchor and set sail for Carver’s Cove, where we would disembark in the morning—but not before devouring some of the best blueberry pancakes I’ve ever had, onshore or off.