Creative baker and cookbook author Jen Bervin chats with SAVEUR about her lifelong passion for pies. 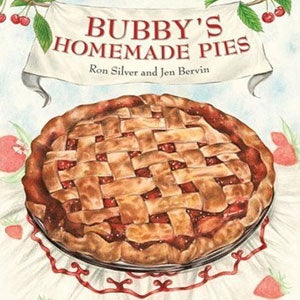 Jen Bervin is an accomplished visual artist and poet as well as a passionate baker of pies. Last year she published the ambitious and eminently accessible cookbook Bubby’s Homemade Pies along with coauthor Ron Silver, owner of the New York City bakeshop Bubby’s Pie Company. Recently, Bervin paused for a moment from her many projects and travels to talk with SAVEUR about the pie socials she began hosting almost a decade ago, why she wanted to write a different kind of pie cookbook, and her approach to creating—whether the object is art or tarts.

Where did you grow up?
In Dubuque, Iowa, west of the Mississippi.

Did your family eat a lot of pie?
My mom baked pies, and I was always at her side, dealing with the scraps. She would give them to me to play with. It gave me a feel for dough early on. It was never presented as something difficult to work with.

In Bubby’s Homemade Pies, you mention that you come from a long line of pie bakers.
My maternal grandma, Adeline, from Nebraska, was a pie baker. My great-aunt on my dad’s side was another pie mentor. There were a lot of pie bakers on my mom’s side—fruit pies. The Jewish side (my dad’s side) is where most of the Cool Whip pies and cream pies seemed to come from. After my dad’s mother, Grandma Shu Shu, died, when we cleaned out her house we found about 30 recipes for lemon meringue pie. Just lemon meringue pie! Her house was always a bevy of treats.

You also say that you baked a lot with your great-aunt.
Tante Dorothy. I really admired her cooking philosophy. She was 94 and still cooking. And she really enjoyed it. She would always say, “Isn’t this fun?” She did it in the right spirit. And when she cooked, she would divide up portions for her neighbors. When she died, we found an envelope in her house full of thank-you notes from her neighbors for all the food she’d cooked for them. She always said that there’s a real adventure in cooking.

Was pie baking a social activity when you were growing up?
We didn’t eat dessert every night. That just wasn’t something our family did. But my mom had three sisters, and pie making was a tradition in their family. They all learned from my grandmother. They grew up on a farm, where they produced and cooked their own food. When our family would get together, they’d all bake pies; there would be a table full of yummy pies at any family gathering. Those girls grew up working hard. I’d be putting the last bite of pie in my mouth, and they’d already be putting away the last dried dish!

When did you start baking on your own?
I’ve always baked pies. But sometime in my 20s it dawned on me that not everyone did it. When I finished art school I had a truck, and I spent some time driving around the country. I visited a place called Crane’s Pie Pantry, in Fennville, Michigan. The pies were extraordinary. They were a fifth-generation family farm. After that, I sought out pie places all over. I had certain criteria: they had to have a pie board; they had to have six to eight different pie offerings. Finding those places was harder than I expected.

Then I moved to Bisbee in 1996, and I started doing more baking there. The pie socials evolved sort of naturally. I’d attended ice cream socials growing up, at the Ham House museum in Dubuque. Every Fourth of July they’d have an ice cream social. It was my first experience of an event where lots of people were eating one kind of food. It’s such a different experience of the food. At a pie social, you see different people’s approaches to one kind of food. It’s kind of beautiful: you realize how broadly and also how specifically a food can be interpreted. With the pie socials, for example, you can have a first-time pie baker who is so proud of what they’ve accomplished and a longtime pie baker who is challenged by what they find. It’s a good environment. Everyone’s engaged, at whatever point they are in their pie baking.

Did you find a ready-made community of pie bakers in Bisbee, or did the pie socials create one?
In Bisbee, eating dinner together at people’s houses was the main way of socializing. Word got out pretty quickly that I loved pie. When I started graduate school, my friend Alison Kaplan threw a party for me, and everyone brought pies. It was the best party I ever could have imagined. Then it became a regular thing. The first was in 1999.

How is a pie social different from just a party with pies?
We take photos of everyone with their pies and label all the varieties. It becomes like a performance. We begin building memories around the pies. And you look forward to the next year, the next season. You start planning your pies.

Are your pie socials in Brooklyn different from the ones in Bisbee?
It’s a socially different scene, but in both cases the pies are as different as the people who attend. Everyone has their favorite leanings, influenced by their individual palates, by nostalgia.

Pies do seem to be a particularly nostalgic food.
Yes, and they’re super-local. Whenever someone talks to me about pie, it’s not long before I ask, “Where are you from?” You can tell by what kind of pie they talk about. If it’s chess pie, they’re from the South. Rhubarb pie is very Iowa. It depends on what grows where you’re living, what the weather’s like there.

You’re also a poet and a visual artist. Do you see those pursuits as related to pie baking?
Pie baking is very creative. Cakes, breads, more chemistry-based baking—it’s so specific. With pie, once you know the basics, the variables, there’s so much room for experimentation. As an artist, I’m always interested in materials and process. It’s the same with pies. But it’s different, too. Pie is social. When I publish a poem, my best friend’s mom doesn’t call. With recipes, you share them, and then people use them to create something of their own. And they’ll do it in a different way from you.

How did you come to write Bubby’s Homemade Pies?

Our agent suggested it; she approached Ron Silver, my coauthor, and asked him to do a proposal. Then Ron asked me to coauthor it. The book took a few years to write. I love to research, I love to learn. So, we spent a lot of time looking at old cookbooks in the New York Public Library’s collection. We looked at a lot of early American recipes. We were interested in seeing where these recipes came from, whether from England or somewhere else. And we’d been collecting pies all along—not so much recipes, but flavors, methods, and ideas.

Is your pie baking style similar to or complementary to Ron’s style?
Oh, I’d definitely say complementary. I’m really a traditionalist. I don’t want to say I’m fussier! But when I go to crimp a pie crust, it’s very uniform. It’s a Platonic pie. Ron’s approach is more slapdash and beautiful. It made for great debates when we were researching the book.

Did you have any formal process of collecting?
We would think of the best pies we ever had and try to get the recipes. There was a coconut cream pie I had in Arizona, but the pie maker wouldn’t share her recipe. I respected that, actually! So, for the book, we ended up having a lot of fun, experimenting until we got it right, just from memory. Everyone else was proud to have his or her recipes in the book.

Do you keep a personal pie recipe collection?
I’m very present tense. If I’m baking a pie, it has my full attention. But a month later, it’s gone. If someone asks me to write down a recipe for them—say, for a pear and rosemary tatin I made for a special occasion—I’ll do it. But when I’m baking I’m unlikely to repeat myself. I’m more likely to remember something I didn’t do; curiosity makes things stay for me. That’s why planning for the next pie social, thinking about what to make, is so much a part of it.

Do the pie socials and the book share an ethos?
Definitely. Most of the available books didn’t reflect our experience of how much fun making pies can be. Instead of just a book of recipes, we wanted to give people the basics of pie making so they could go on and invent their own combinations. The recipes we give are great guides. An experienced baker might leaf through the book for tips and ideas more than for recipes to follow to the letter. We encourage everyone to experiment and adapt.