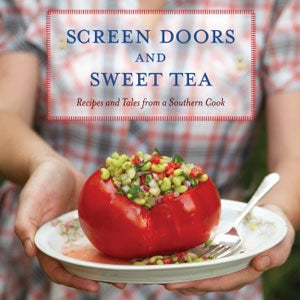 Take it from a Mississippi transplant living in New York City: good Southern food is hard to come by. In my attempts to satisfy my appetite and nostalgia for home, I’ve found only dry, poorly seasoned fried chicken and soupy plates of shrimp and grits. Eventually I’ve come to realize what most Dixie souls already know, that the South’s best food comes not from restaurants but from family homes.

The work of Martha Hall Foose, a Mississippi native and the author of Screen Doors and Sweet Tea (Crown Publishing, April 2008), played no small role in that epiphany. Foose is the executive chef at the Viking Cooking School, which partners with the kitchen equipment company Viking and offers lively, accessible cooking classes across the country.

In both her teaching and her writing, Foose takes a warm, appealing approach to food. Screen Doors is packed with traditional recipes, like the one for cheddar-flavored Yazoo Cheese Straws, and new, inventive recipes, like the one for Muscadine Lamb Chops, made with sweet and musky muscadine grapes, which proliferate in the South. And her banana pudding, layered with tea cakes and served in small mason jars, epitomizes hospitality and charm.

What further distinguishes Foose’s book from other Southern cookbooks is her genuine gift for storytelling. Through recipe headnotes and scattered anecdotes, she unveils a welcoming picture of the South and celebrates its rich, storied culture. Her readers meet a handful of Foose’s family members—like Uncle Bobby, a catfish farmer, and Great Aunt Carryne, a champion of congealed salads—but also colorful local characters, like the tamale man who sells his tamales from a truck off Highway 49, the Mississippi Delta’s main thoroughfare.

I cooked dozens of dishes from Screen Doors and fell in love with many of them. When I plucked Foose’s crispy fried catfish and piquant hush puppies out of the hot, bubbling oil, I almost doubled over: suddenly my kitchen smelled just like the Fish Shack, the dirt-road-side fish house in Carmack, Mississippi, that I’d loved to visit on childhood weekends after spending the days working on my grandparents’ farm. I also made Foose’s Sweet Tea Pie, which she first tried as a teenager and continues to tweak today. The beige-colored custard is as refreshing as tea but is improved as a velvety, lemon-infused pie. Most of all, though, it reminded me of what I like the best about Southern food: it makes you feel at home, even when, like me, you’re thousands of miles away.