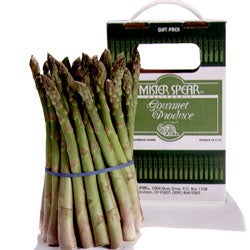 Chip Arnett has a mission in life: to debunk the myth that thick asparagus is always tough and thin asparagus is always young and tender. “Tenderness has to do with age, not necessarily size,” explains Arnett, owner of Mister Spear, Inc., a mail-order produce company. And the thin spears labeled “baby asparagus” in markets might not be young at all. “Skinny spears often come from tired, overworked plants,” Arnett explains. “Thick spears usually come from young, healthy ones.” If thick spears are tough when you buy them, he adds, it’s probably because of the way they’ve been handled. According to Arnett, many grocery chains stockpile asparagus in cold storage, periodically dribbling their wooden crates with ice water to keep the vegetables looking fresh. Often, the moisture is insufficient, and the stalks arrive in stores dehydrated.

There’s no danger of that with Mister Spear. Arnett’s company—headquartered in Stockton, California, in the central San Joaquin Valley, where a significant amount of the nation’s asparagus crop is grown—gets asparagus from the field to the consumer’s table overnight or, at the latest, within 48 hours.

Arnett, a businessman who raised beefalo (a low-fat buffalo-cattle cross once marketed as a new, health-conscious gourmet treat) for a time, started Mister Spear with Dante Nomellini, a longtime asparagus grower who, according to Arnett, “just oozes experience.” Nomellini taught him what asparagus should taste like, Arnett continues, and he decided to spread the word.

“I knew that most people had never tasted great asparagus because it’s rarely found in stores,” he explains. Once they tried top-quality jumbo spears (a grade that makes up only 4 to 5 percent of total California production), they’d want more, he thought. “We started out sending a few gift packs as a sort of test. Our mailing list grew through word of mouth,” he says. To keep up with demand, Arnett worked on “perfecting the concept” by testing shipping options, devising special packaging, and establishing further contacts in the asparagus-growing community.

Every day during the spring season, from March through May, just-picked asparagus is brought from fields throughout the valley directly to the 100 or so local packing sheds where produce brokers come to inspect and buy them. On Mister Spear’s shipping days, the company sends 20 to 30 graders to visit many of these sheds, looking for young, fat, straight-as-an-arrow specimens. The graders are so rigorous, says Arnett, that they often end up choosing just one spear out of every 500 they inspect. The asparagus that makes the cut is trimmed, packed, and shipped by air to consumers the same day. It’s so fresh that it’s best simply simmered briefly in water and seasoned with a squeeze of lemon juice.

Mister Spear (misterspear.com) also sells a variety of seasonal fruits and vegetables besides asparagus, among them avocados, artichokes, and bing cherries—but asparagus remains the company’s best-seller.