The most fragrant herb on earth is also one of the most user-friendly ingredients around. 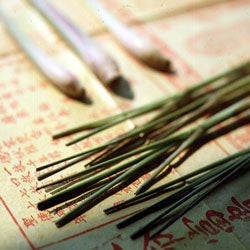 You sip an aromatic Vietnamese chicken broth. What is that sweet, mysterious flavor? You bite into a marinated, grilled shrimp, surprised by a fresh hit of … what? Lemongrass, you learn. But even when you discover what it is, and find a bunch in an Asian market, it’s still not obvious what to do with it.

Lemongrass, with its two-foot-long gray green stalks, stiff as beach grass, is a member of the perennial tropical grass families, Gramineae—specifically of the genus Cymbopogon, thought to be native to South India or Sri Lanka. It grows with such tenacity that it is sometimes cultivated to prevent soil erosion.

Two parts of the grass are used in cooking: The long outer leaves, too tough to chew, are used to infuse liquids (such as that Vietnamese broth) with their bright lemony flavor. The tender inner core is finely chopped, like scallions, and added to mixtures like that shrimp marinade.

As Elizabeth Schneider explains in her book, Uncommon Fruits and Vegetables: A Commonsense Guide (Harper & Row, 1986), lemongrass has long been harvested for flavoring extracts, cosmetics, perfumes, and medicine. Its similar but strident sister is citronella, a common ingredient in insect repellents and liquid detergents. In fact, citronelle is French for lemongrass. In much of Africa and South and Central America, lemongrass is used only in drinks. Blended with other aromatics, it is a staple in herbal teas in North America and Western Europe.

In the traditional culinary repertoire, lemongrass is limited almost entirely to Southeast Asia, where it shines brightly, particularly in Thailand (where it is called takrai), Indonesia (sereh), Malaysia (serai), and Vietnam (xa). Recently, though, immigrants from such lands have introduced the subtle magic of this grass to North Americans through their restaurants and markets.

But you don’t have to be Asian to love lemongrass, as menus-of-the-moment illustrate. American chefs are now using it freely. And diners intrigued by East-West “fusion” cuisines want to prolong the pleasure by cooking with lemongrass at home.

Once they learn how to handle it, they find this exotic ingredient delightfully accessible. You can’t really make a “mistake” with lemongrass. Like lemon, it enhances a wide range of foods, but unlike lemon, it will not turn bitter or tasteless with long cooking—nor will it overpower with rind flavor or acidity. It is subtly effective both raw and cooked, used as flavoring or edible ingredient, and in Eastern or Western cuisines.