Like ice cream sodas and worcestershire sauce, this culinary classic came about purely by mistake. 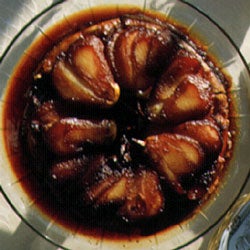 According to culinary legend, the original tarte tatin, now one of the glories of the French dessert repertoire, was invented accidentally by the Tatin sisters, Stephanie and Caroline, in Lamotte-Beuvron, near Orleans, in the 1850s. Caroline apparently forgot to put the pastry dough in the pie tin before filling it with buttery, sauteed apples. She put it on top of the pie instead, and once it was cooked, she turned the whole thing over to display its caramelized bottom. Voila.