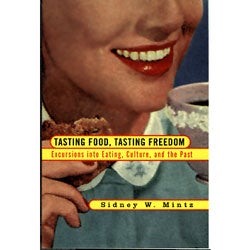 To the anthropologists of an earlier time, writes Sidney Mintz in the introduction to Tasting Food, Tasting Freedom (Beacon Press, 1992), what people ate and how they ate it tended to be “more interesting if they offended the observer, baffled him, or were ceremonialized, than if they simply pleased those who were doing the cooking and eating.”

I met Mintz once, at a conference on Spanish gastronomy in Seville. It was a curious affair, alternately academic and pop, riveting and boring, with a good deal of food-biz backbiting and professional jealousy abroad. In the midst of it all, though, Mintz—the William L. Straus, Jr. Professor of Anthropology at Johns Hopkins University—seemed to be having a terrific time, meeting new people, listening to other viewpoints (sometimes with more respect than they probably deserved), and, above all, obviously enjoying the good food and wine offered between sideshows and slide shows. He seemed simply pleased by what was being cooked and eaten.

That feeling of pleasure infuses Mintz’s new book, a collection of thoughtful but never ponderous essays about why we eat what we eat and what it means when we do. “My father was a cook,” he begins. “One of my sisters corrected me for years, insisting that he was a restaurateur. But I know that he was a cook.” A waitress at the diner his family owned, he recalls, used to say that his mother’s idea of a good meal was “a cup of black coffee and an editorial in the Freiheit (a left-wing Yiddish newspaper).” In that case, Mintz was clearly a daddy’s boy. He first discovered how satisfying cooking could be when his father got sick one day and the future anthropologist, then aged 11, had to prepare a vast quantity of tomato sauce and meatballs for the diner, following his father’s step-by-step instructions. “My attitudes toward food, and my esteem for it, come from my father,” he tells us. Not that his father was impressed with his son’s culinary acumen. “He would watch me carving a standing rib and would say: ‘How is that you have a Ph.D. and you still can’t carve a standing rib?'”

But his father may have taught him more than he realized. A bit of herring was always served at the beginning of each meal at the family table, recalls Mintz, and he once complained about the practice. “Don’t make fun of the herring,” his father replied. “If there hadn’t been any herring, there wouldn’t have been any Jews.” Mintz recognized instantly what his father meant, he tells us—and indeed he has gone on to build a career based upon, as it were, the relationship between the herring and the Jews.

That is, Mintz has devoted his considerable professional energies to the study of how food has shaped the world, and vice versa. “No other fundamental aspect of our behavior as a species except sexuality is so encumbered by ideas as eating,” he proposes. Elsewhere he reminds us that “eating is never a ‘purely biological’ activity,” that “the techniques employed to find, process, prepare, serve, and consume … foods are all culturally variable, with histories of their own,” and that “consumption is always conditioned by meaning.”

Mintz’s earlier Sweetness and Power: The Place of Sugar in Modern History (Penguin Books, 1986), analyzes the ways in which mankind’s now-favorite sweetener changed the course of economic and social history (and those ways were myriad). Tasting Food, Tasting Freedom expands on themes first developed in that book with chapters on “The Conquest of Honey by Sucrose” and “Sugar and Morality” (the latter of which speaks to the inevitable “association of sweet things with luxury and excess,” and observes that morality itself has become “a new consumable”).

In other essays, Mintz discusses the relationship between rare foods and political power; uses the ancient confection known as marzipan to investigate our notions of “Color, Taste, and Purity”; considers the economic implications of American eating habits; and—in the masterful title essay—reveals how New World slaves gained cultural identity through the production and processing of food. “[W]e must try to understand how the slaves coped as whole persons with their condition,” he writes. “Their behavior shows that indeed we do not live by bread alone, but that our hearts and our heads are intimately connected to our stomachs.”

Mintz is a scholar, but he is never a boring one. His writing is intellectually lively and stylistically colorful. He’s the kind of guy you’d like to have dinner with—as long as he wasn’t the one carving the standing rib.