The Bird and the Guide 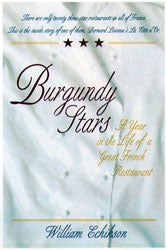 When Bernard Loiseau was a 17-year-old apprentice at the celebrated Troisgros restaurant in Roanne (and not a very promising one: Jean Troisgros once said of him, “If this kid becomes a cook, I’ll be an archbishop!”), he saw first-hand what getting three stars in the Guide Michelin—the ultimate gastronomic accolade—could mean. Troisgros had had a respectable two stars, but shortly after Loiseau started working there, it was awarded its third. The entire restaurant celebrated with champagne, and all of a sudden, Loiseau recalls, the place was packed with celebrities. The whole atmosphere changed. “[T]here was a click in my head,” he later recalled. “I said, Someday I’m going to get three stars.”

Twenty-three years later, in 1991, he did just that. In Burgundy Stars: A Year in the Life of a Great French Restaurant, journalist William Echikson, a Paris-based correspondent for Fortune , tells how. By the time of his triumph, Loiseau—who is jocularly referred to, by at least some of his English-speaking customers, as Bernie the Bird (oiseau means “bird” in French)—had become chef-proprietor of a venerable old restaurant called La Cote d’Or in the little Burgundian town of Saulieu, about 45 miles west of Dijon. He had already won two stars, and was hungering for the third he saw shining, tantalizingly, on the horizon.

Echikson spent a year virtually living at the restaurant, observing at close range both the workings of the place and the ambitions and machinations of its owner. Burgundy Stars is an account of Loiseau’s campaign for his third star, and it turns out to be highly entertaining and full of life—and sympathetic but never sycophantic. Along the way, we learn much not only about Loiseau but also about the Guide Michelin, the rival Gault Millau guide, the birth and death of nouvelle cuisine, the development of modern burgundy wine, and small-town life in rural France. (Saulieu was shocked by scandal, Echikson reports, in early 1991, when it was discovered that the local priest had been shooting cats that threatened his beloved pigeons.)

Loiseau was born in 1951 in the industrial city of Clermont-Ferrand, in central France—headquarters of the Michelin Tire Company, interestingly enough. His father’s family had been butchers; his mother’s family owned a noted charcuterie. Loiseau drifted into cooking himself, it seems, mostly because he didn’t seem to be much good at anything else. After apprenticing at Troisgros and elsewhere, Loiseau made his mark in the early 1970s as chef of Claude Verger’s La Barriere Poquelin in Paris. In 1975, Verger bought La Cote d’Or in Saulieu and sent the young man there.

Under Alexandre Dumaine, one of the most famous and influential French chefs of the 20th century, La Cote d’Or had boasted three stars for decades. After Dumaine retired in 1964, the new owner lost one star—and when Verger took the place over, the remaining two were automatically stripped away by Michelin. Though Loiseau admits that he had never heard of Dumaine when he arrived in Saulieu, he had soon made it his mission to gain back all three of La Cote d’Or’s stars—for himself, this time. His ardor only increased when he bought the place from Verger in 1980.

The cooking style he developed in Saulieu was deceptively simple. In contrast to the baroque creations of some of his peers, Loiseau’s work was almost minimalist. He started with the finest raw materials, combined them with one or two contrasting (or complementary) elements, fine-tuned their presentation, then drilled his staff until they could reproduce the dish perfectly every time. (Echikson is dead-on when he notes that “The secret behind La Cote d’Or’s great cooking was not an artistic temperament. It was perfecting the repetitive tasks of plucking, peeling, and cutting so that the potato cubes were perfectly square and the carrot slices perfectly round.”)

For a while, Loiseau took a lot of kidding for his “sauces a l’eau,” or water sauces—constructed not with wine or cream as in most other French cooking, but with the simple essences of whatever he was cooking and with, well, water. Even with the addition of wine and cream, in moderation, his dishes—sole cooked in its skin with a lemon-scented olive oil emulsion, frogs legs in parsley sauce, fricassee of lobster with cabbage, an impeccable cote de boeuf—retain an elemental purity.

A big, balding, intense fellow, with an amiable, slightly goofy charm, Loiseau loves talking about himself and his accomplishments almost as much as he loves talking about food. His self-promotion is so guileless, however, that you can’t help but like him for it.

And you can’t help but like him for the fact that he let Echikson witness, and write about, his failings as well as his successes. Loiseau’s marital and financial problems, his shameless courting of Michelin inspectors (as well as other gastronomic critics), his opinions of other chefs (including two young American apprentices, at least one of whom isn’t going to like this book very much), his doubts and jealousies and fits of pique—all are here, unapologetically.

At the same time, though, Echikson accurately portrays Loiseau’s passion for food, his obsession with perfection, his sense of humor, and his warmth of personality.

One afternoon, for instance, the French minister of culture arrives at La Cote d’Or with his entourage at 12:45, and announces that he must leave for Paris in an hour and 15 minutes for an important appointment. As Loiseau watches from the kitchen in dismay, the minister bolts down his lunch, rushing off without dessert.

Later that same day, 150 aging bikers, fresh from a nearby Harley-Davidson convention, roar up outside the restaurant and start hooting at the prices on the menu posted outside. Loiseau goes out to greet them, and—to the horror of his staff—invites them all in for champagne. “After the drinks were finished,” writes Echikson, “he waved a cheerful good-bye to the bikers—and uttered an implicit criticism of the … minister. ‘These people,’ he said, ‘they know how to live.'”