Thursday dinners at a hunting and fishing camp in North Carolina 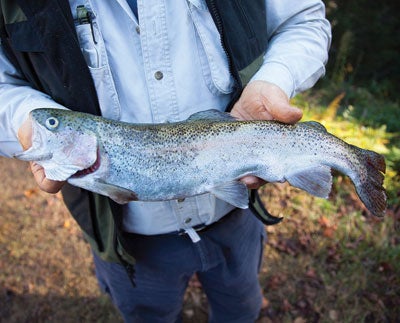 When I arrive at Seniard Creek Farm for dinner, things are just as I remember them: Rhododendron bushes still line the rutted gravel road; the old log cabin is warmed by a fire in the stone hearth; and there are a bunch of gray-haired men in the living room, drinking whiskey and practicing the high art of BS. I’ve made the trip to this hunting and fishing club in western North Carolina from my home in New York City as a guest of my grandfather, John Erichson. I call him Pop, and at 95, he’s the oldest of the club’s 30 members.

It’s a Thursday in October, the one day each week when Pop and his buddies gather together to fish, eat, and play cards. On the bar, there’s a platter of wild-boar sausage and smoked pork tenderloin, which the men snack on as they banter about the off-field struggles of the Tar Heels football team, the cold weather approaching, deer season. It’s been a year since my last visit to Seniard Creek, and the old men quiz me about my new apartment, my recent wedding, my job.

Out back, the kitchen is warm and cozy with Clarence Bratton’s cooking. Clarence, a 77-year-old retired cook from the local hospital, has been preparing these Thursday-night meals for as long as anybody can remember—so long that he’s as much a member of the club as anyone else. Pop, his white hair still thick but his back slightly bent, warms himself by the wood-burning stove where Clarence is stewing okra and tomatoes and simmering bacon-studded collard greens. He seasons two whole beef tenderloins with chopped garlic, black pepper, and rosemary sprigs. Cast-iron skillets of corn bread and roasting pans of quartered new potatoes go into the oven. I watch Clarence divine each dish’s doneness with a tap on the rims of the battered pots. “Well, let’s see what we got now,” he says to himself, going down his mental checklist for the menu.

The smell of seared beef summons folks to the kitchen’s long picnic tables, which are covered with red-checked plastic tablecloths. Out come platters of juicy, rare beef; wedges of corn bread to be slathered with honey; and supermarket bottles of cabernet sauvigon and merlot. A request goes out from a friend of Pops: “Hey, Pearce, can you pass the goddamn Chateau Who Knows?” 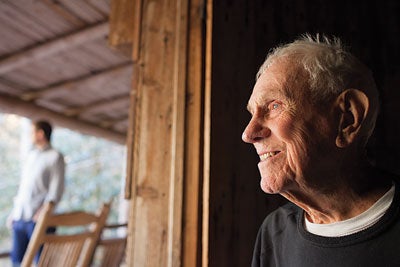 All over the South, similar rituals still unfold in old-fashioned clubs like this one—places where young guys like me discover what it means to be men over fishing poles, gunsights, and big, raucous meals with their fathers and grandfathers. Long before I became a professional cook—and a city boy—I learned the ways of the world up here. Coming back reminds me of the lessons I soaked up at my grandfather’s side.

Many of the first members of this club were doctors; it was their sons’ generation that voted Pop in after he retired from running the Gerber baby-food plant in Asheville, in 1983. In fact, there are so many doctors sitting at this table tonight, including Pop’s internist, Miles Elmore, that I realize the old man is safer up here than he is back home alone.

Clarence’s cooking is as good as I remember it: The tenderloin is rosy pink and shot through with the flavor of the herbs; the corn bread is moist thanks to the addition of canned corn. Before long the table is cleared and plates of homemade blackberry-peach pie are passed. Coffee is poured from the metal percolator. The men move into the front room to play a card game—a glorified version of Old Maid—called F—- Your Buddy. We each ante up $1. Cigars are lit, the jokes get dirtier, and the laughter gets louder.

Earlier that afternoon, I fished Seniard Lake with my grandfather. I treated it like the day I was married, slowing down time, savoring the details. I helped Pop into the aluminum, flat-bottom boat, the same one we used to navigate this lake when I was a kid, and paddled out to where the fish were rising.

Fishing has always been central to the Seniard Creek ritual: I can still remember the feeling of excitement as I helped Pop pack the back of his car just so with the blue Igloo cooler, the fishing vests, the fly rods, and a bag full of sandwiches that my grandmother, Mom Pat, had made for us to eat while we fished. We’d often pick up Seniard Creek members Irby Stephens, Joe Hunter, and Mickey McGuire—the hearing-aid patrol, Pop called them—for the 45-minute drive from their homes in Asheville to the camp in remote Henderson County.

It was Pop who taught me how to cast a line: elbow in, snap your wrist. I learned to keep my fly line taut and straight on the water. “When the trout takes the fly, set the hook!” he would always say. Pop showed me how to use the deer-hair caddis flies that his friend Dr. Stephens would tie by hand and give to me every Christmas. He always handled the trout with care, holding them with a surgical towel dipped in lake water so as not to damage them upon release. 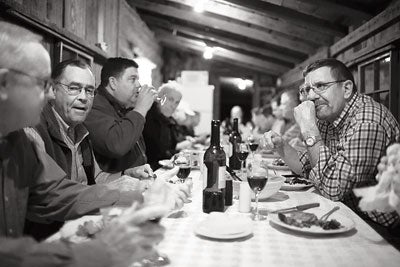 My dad left my mom when I was 12, and Pop took me under his wing more than ever during that long, angry summer. We fished our way to an unspoken bond and caught a boatload of trout in the process. Recently, I thanked him for filling that void.

“Did you do it consciously?” I asked him.

“I don’t think it was about being a teacher or a dad,” he said. “You were my companion.”

When I got older, I adapted Pop’s still-water lessons to my other fishing spots, like the fast-moving rivers of Idaho and the saltwater flats of the Bahamas. Whenever I caught myself fiddling with my gear, or untying kinks in my line, I’d hear a familiar refrain: “You’ll never catch a fish without your line in the water, Hunter.” And after a good cast, I’d hear that same voice: “Attaboy.”

It’s past 11 p.m., and the last card game is over. I clean the fish Pop caught earlier in the day, pack it away in the blue Igloo cooler, and walk out to the porch while the men clean up and gather their things. For the first time, I notice the brass plaques on the rocking chairs memorializing departed club members, including Pop’s old car pool buddies Hunter, McGuire, and Stephens.

I learned the ways of the world up here. Coming back reminds me of the lessons I soaked up at my grandfather’s side

I ate one of my last dinners with my grandmother on this porch. Women aren’t invited to the Thursday-night meals, but Mom Pat would come up on the weekends to join Pop and me from time to time. The night of that meal, my wife, Ellen, and I ate steaks and talked and drank wine with my grandparents until well after midnight—a Seniard Creek double date. It was Mom Pat who used to greet Pop and me back in Asheville when we returned from our fishing trips, waiting to look at the trout we’d caught. She’d make breakfasts of scrambled eggs cooked with tender pieces of the fish that Pop had smoked over smoldering fruitwood on the grill. She’d bake the fish whole, sometimes stuffed with lemon and herbs, and sometimes cooked plain on brown paper bags, which gave the fish a toasty flavor.

The moths dance in the porch lights as we say our good-byes to Clarence and the other stragglers. I ease the truck down the rutted road, and my mind wanders back to those brass plaques on the rocking chairs. My grandfather watches the road for deer from the passenger seat. “Hang on, old man,” I think. “Hang on.”