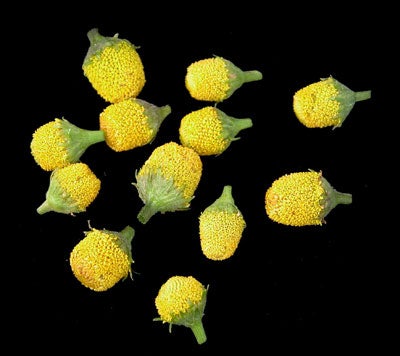 It begins with a burst of fresh, grassy flavor, akin to a spark of parsley or dandelion, on my tongue, followed by a sour, citron tang. And then—pow!–fizzy waves roll champagne-like across my palate, the surface of my tongue sparkles as if I’d just palmed a handful of Pop Rocks, my salivary glands kick into overdrive, and parts of my mouth go alarmingly numb.

I’ve just popped a yellow flower the size and shape of a gumdrop. It’s the bloom of an Amazonian herb called Spilanthes acmella, known in this country as paracress, spotflower, and toothache plant, the last for reasons that now seem obvious. It’s easily one of the weirdest things I’ve ever eaten.

Koppert Cress, a Dutch distributor of microgreens, is growing paracress on Long Island and marketing the plant’s tongue-buzzing blossoms as “Sechuan Buttons.” Though the entire plant is saturated with spilanthol, an analgesic alkaloid that numbs the mouth and stimulates saliva flow, it is its flower, resembling nothing so much as the heart of a very fat daisy, that packs the greatest sensory wallop. Chewing an entire bud will numb your tongue and gums, and a taste of even a few filaments will subject your mouth to spilanthol’s peculiarly electric frisson.

In marketing the blossom to chefs, Koppert Cress has played up the plant’s potential to startle. The company’s first big success came with placing the plant at the disposal of Ferran Adria, who used it in 2004 at El Bulli in an amuse-bouche called Electric Milk: a lacey wafer made of dehydrated milk topped with filaments teased from the paracress flower. Though the El Bulli menu that year also included other ethereal creations, such as frozen Parmesan air with muesli, and dandelion leaves in cinnamon and saffron spray, the Electric Milk stood out for its extraordinary effect on the palate. “From the outset, it was a product that greatly surprised us,” says Eduard Xatruch, an executive chef at El Bulli. “Tasting the Sechuan Button is like being a child sucking on an electric battery: the feeling left in the mouth is electrifying.”

Since then, the herb’s been used by mixologists and the occasional food-forward chef, though it has failed to gain traction in the culinary mainstream in the West. But the plant occupies a gastronomical niche below the equator—particularly in South America, where it spices salads, stir-fries, and sauces. In Colombia, paracress is sometimes called quemadera (it burns). In Yucatan, the Maya dub the stinging herb xux, “wasp.” But the cress has its greatest culinary expression in the Para region of northern Brazil. There, the eponymous paracress, known locally as jambu, is mixed with manioc juice, hot chili peppers, and garlic to flavor a tongue-tingling soup called tacaca and is used to baste meat. And, pulled apart into filaments, the flower would be a great substitute for similarly numbing and tingling spices like Sichuan pepper, especially in dishes where you don’t want the gritty texture of the peppercorns.

If nothing else, the flowers are phenomenal palate cleansers. After eating one, as normal sensation returns and the salivary waterworks subside, my mouth feels like it’s been deep-cleaned, and my tongue sensitive and super-fine-tuned to flavors, as though it’s been schvitzed.

Curious eaters can order paracress flowers from Koppert Cress or Sungrown Organics. Seeds of Spilanthes acmella and oleracea are also available from such catalogues as Richter’s and Sand Mountain Herbs. The latter variety, Spilanthes oleracea, also known as “Peek-a-boo” or “eyeball plant,” has an attractive two-toned flower.