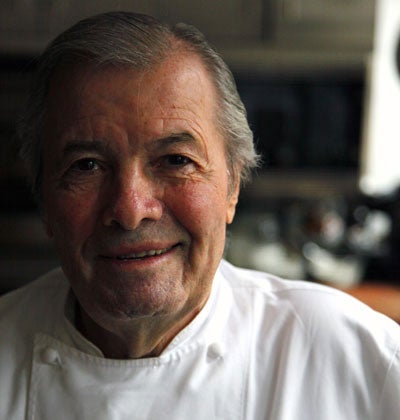 When Jacques Pepin stopped by the SAVEUR offices to show us how to make some of the dishes he wrote about in his memoir and cookbook The Apprentice (Houghton Mifflin, 2003), we were eager to join him in the kitchen. Here was one of the most influential chefs of the past half century—a collaborator of Julia Child’s, an alumnus of the legendary New York City restaurant Le Pavillon, and the author of La Technique (Simon & Schuster, 1976), one of the best culinary textbooks ever put into print. We knew we’d glean all sorts of useful lessons from him.

Within minutes of arriving, the chef was rifling through our fridge for ingredients and sharing some of his favorite tips. He showed us how to chop herbs without bruising them, by rocking the blade of a chef’s knife forward and back. When cracking an egg, he hit it on a flat surface, rather than the rim of a bowl, to keep the egg free of shell fragments and to prevent the yolk from breaking. Instead of scoring and blanching tomatoes to peel them, he simply used a paring knife, a faster method that also yields skins for flavoring stock. And he demonstrated the wisest approach we’ve seen yet to cutting up a chicken.

These are the kinds of smart strategies we’ve always learned from Pepin, but to observe his actions up close—such as when he made a last-minute, pitch-perfect adjustment to his mother’s apple tart—was to understand that there’s more to his expertise than flawless technique. The chef was always tasting, smelling, touching, looking, and then adapting to the situation at hand. When the tart came out of the oven, Pepin decided it needed more color, so he glazed it with a few spoonfuls of apricot jam, even though the original recipe didn’t call for it. Of course, it looked—and tasted—divine.