The rise, fall, and rise of America's favorite lettuce. 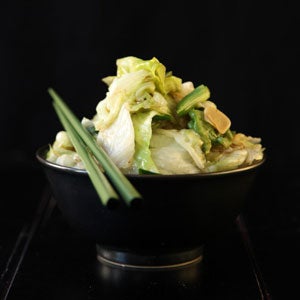 This fragrant stir-fry, a version of one in The Wisdom of the Chinese Kitchen (Simon & Schuster, 1999) by Grace Young, is a popular Chinese New Year dish. **See the recipe for Stir-Fried Iceberg Lettuce »**. André Baranowski
SHARE

It is safe to say that iceberg lettuce has a bad rap. Mild tasting, pale in color, and sold wrapped in cellophane emblazoned with corporate logos, it is the white bread of the produce aisle. Criticized for being boring and bland, void of cachet, it has become something of a punch line, a metaphor for everything that was wrong about the way we used to eat. To many food lovers, the film director John Waters’s quip that iceberg is “the polyester of lettuces” isn’t quite harsh enough.

But when I was young, all lettuce was iceberg. I didn’t ask myself whether I liked it any more than I questioned whether I liked american cheese or red delicious apples. It was a given, a constant presence in the refrigerator, at the ready for shredding into salads and stuffing into sandwiches. Since then, I have fallen in love with all the worldlier lettuces that have become available over the years—bitter endive and peppery arugula, velvety mache and prickly frisee—but I have to admit that there are times when no other leaf but iceberg will do. All snap and refreshment, with a taste like that of cool, sweet water, iceberg lettuce is the crunch in my BLT, the base for my zesty chopped salad, and even the grace note in my fried rice.

We tend to think of iceberg, which was invented in the United States over a century ago, as an all-American food—a garnish for burgers or, when cut into wedges and topped with blue cheese dressing, a perfect foil for juicy steaks—but some of the lettuce’s most interesting uses appear in other cuisines. In her book The Wisdom of the Chinese Kitchen (Simon & Schuster, 1999), Grace Young includes a recipe for iceberg lettuce stir-fried with garlic, soy sauce, and black pepper that completely changed the way I think about the food; the high heat turns the leaves tender, glossy, and aromatic. “The Chinese, who love iceberg, stir-fry or braise it because they generally don’t eat raw vegetables,” Young told me, speculating that the ingredient became popular after it was introduced to Hong Kong in the 1960s. Today, in that city and other Western-leaning ones, like Shanghai, iceberg lettuce is sometimes shredded and served as a base for pan-fried meats; its sturdy leaves are also used as edible cups for minced chicken, duck, or pork. What other lettuce could be put to work like that?

After learning about the many ways in which Chinese cooks have embraced iceberg, I became curious about the journey of this iconic American lettuce, at once so maligned and so ubiquitous in its native country. What are the real grounds for epicures’ distaste for iceberg? Is it a genuine failing on the part of the food itself, or is it merely a case of culinary snobbery?

A subvariety of the family of lettuces known as crisphead (the other main types of lettuces are looseleaf, butterhead, and romaine), iceberg was developed from a kind of loose and leafy head lettuce called batavia by the Philadelphia-based seed company W. Atlee Burpee & Co. in 1894. The new lettuce was an instant sensation: while other batavia-derived crisphead lettuces of the day also formed spherical heads, their leaves were greener and not nearly so crisp; a head of iceberg, by contrast, was pale in color, densely packed, and protected by unusually sturdy outer leaves.

Some say that iceberg lettuce got its name from the way the heads stuck up out of beds of crushed ice in railroad boxcars. Not so, says George Ball, the chairman and CEO of Burpee, who asserts that the name refers to the heads’ crunchy texture and whitish color. Indeed, a Burpee seed catalogue printed in 1904 touts iceberg’s “thoroughly blanched” and “crisp” leaves. In that same catalogue, Burpee introduced a new sibling of iceberg called brittle-ice, which had an even milder, sweeter taste and a lighter color than the original iceberg varieties, qualities that appealed to Victorian tastes. In the 1940s, scientists eventually crossed brittle-ice with another crisphead variety to create the perfectly round, extremely compact, and ultracrisp iceberg called great lakes, which became hugely popular with farmers around the country.

By midcentury, iceberg lettuce—which plant breeders had engineered so that it was slow to wilt and easy to ship—had become a symbol of America’s rapidly industrializing agricultural system. In 1955, John Steinbeck wrote an article for Holiday magazine about his hometown of Salinas, California, where the bulk of iceberg lettuce was grown (and still is). He described a community where iceberg was king: “Now we had a new set of upstarts: Lettuce People,” he wrote. Steinbeck’s novel East of Eden, which was published in 1952, echoed that theme: in the book, the writer depicts a failed iceberg lettuce enterprise as an example of an American farm family’s overzealous ambition and a cautionary tale about the dangers of monoculture.

Before iceberg came along, lettuce was strictly a seasonal and local crop; now it was something that Americans could eat year-round no matter where they lived. Plentiful and cheap, it was instrumental in expanding the repertoire of American salads. The original, 1931 edition of Joy of Cooking (Bobbs-Merrill) hinted at the future; it contained numerous recipes for salads, virtually all of them of the fruit or gelatin kind—except one: a green salad consisting of iceberg lettuce cut into wedges. By the 1960s, new editions of the book featured numerous lettuce salads and praised iceberg as a green that “does not wilt”. Iceberg became fashionable, whether in garden salads, chef salads, or the now legendary cobb salad, that hearty composition of chicken breast, avocado, bacon, and tomatoes, all of it buoyed by iceberg’s hearty leaves. Invented in 1937 by Robert Cobb, the owner of Hollywood’s Brown Derby restaurant, the salad possessed movie star glamour and the heft of a main course.

In the 1970s, iceberg lettuce served as a canvas for a number of special-occasion salads that took advantage of the ingredient’s unusual hardiness. “Wilted” iceberg lettuce salads (American cousins of Italian and French wilted dandelion salads) were made by dressing the leaves with hot bacon fat and vinegar; the leaves soak up the vinaigrette’s flavor while maintaining their textural integrity. And there were “overnight” or “layered” salads that could be made the day before they were served. Whenever I was invited to a dinner party during that era, I’d pull out the big glass salad bowl I’d gotten as a wedding present and set to work filling it, covering the bottom with a bed of shredded iceberg and then adding tiers of sliced red onion, tomatoes, cubed cheese, peas, and hard-boiled eggs. I’d spread mayonnaise on top of it all, as though I were icing a cake, and put the bowl into the refrigerator to let the salad “set” overnight. The cheese was processed and the peas were frozen, but the result was gorgeous; the lettuce, ever crisp. There was never a morsel left at the end of the meal.

By the end of the 1970s, iceberg lettuce had begun its fall from grace in the United States, a decline caused in large part by the surging popularity of romaine, the star of such popular salads as the caesar. Americans were waking up to the reality that fresh vegetables were better than canned and frozen ones, and when it came to greens, more color was presumed to mean more nutrients. (To its credit, iceberg lettuce, though not so nutritious or high in fiber as romaine, is high in vitamin B.)

Other colorful lettuces soon followed. By the end of the 1980s in the United States, upscale restaurants were serving salads of baby lettuces, often given the French name mesclun. Italian restaurants featured “tricolor” salads of endive, radicchio, and arugula. To feed diners’ expanding (if Mediterranean-centric) appetites, farmers started growing more and more varieties of lettuce, taking advantage of improved shipping and packaging techniques that allowed even fragile greens to survive long-distance travel. Some of those greens were flavorful and delicate indeed; others had no flavor or crunch at all. Regardless, their precious shapes and bright colors were enough to make iceberg seem not only passe but unconscionably uniform and old-fashioned.

At the same time that iceberg lettuce was losing its cachet in the United States, however, it was gaining in popularity around the world—both because it was considered chicly American and also because it was a profitable crop. In Mexico, where farmers began growing iceberg in the 1980s, the lettuce is used as a sweeter substitute for cabbage; SAVEUR contributing editor Rick Bayless says that cooks took to stirring iceberg into pozole soups or serving it on the plate with spicy foods as a garnish, or ensaladita.

In Scandinavia and in northwestern Europe, starting in the late 1970s, farmers began to grow varieties of iceberg; today the lettuce still often fetches higher prices than do other types in those parts of Europe. In Spain, France, and Italy, iceberg is raised for export. In Israel, the Middle East, Great Britain, and Australia, it’s an important domestic crop and a common salad lettuce and garnish. But nowhere outside the United States has iceberg taken a firmer hold than in Asia. In China, the world’s largest producer of lettuce in the world, cooks cherish iceberg’s resilient texture and add it to warm dishes like congee soups and fried rice. In Japan, locally grown iceberg has become a staple of the simply dressed salads that are often eaten for breakfast or as a refreshing side dish.

In recent years, I’ve started to sense the stirrings of an iceberg revival on our shores. On menus that used to serve microgreens, I now often find those comforting iceberg wedges and chopped salads (though I’m still waiting for a layered-salad comeback). What’s more, small-scale farmers are beginning to cultivate some of the more colorful, flavorful, and nutritious varieties of Lactuca sativa (as iceberg lettuce is taxonomically known) that are currently being developed by agricultural scientists. Others are seeking out older, heirloom iceberg varieties, like great lakes, ice queen, and new york head, which have frillier leaves, larger heads, and more-supple textures. Still others are bringing to market newer varieties, like skyline, maverick, crystal, magenta, crispino, centennial, and summertime, that expand their customers’ notion of what relatives of iceberg lettuce can look and taste like. Frieda’s, a produce distributor based in Los Alamitos, California, that sells to upscale retailers around the country, has even started marketing “baby iceberg” lettuce that comes in softball-size heads.

At my farmers’ market, on Manhattan’s Upper West Side, iceberg is always the first lettuce to sell out. “About five years ago there were the usual stories about iceberg having no nutritional value, and we saw a dip in sales,” said Jeff Bialas, who raises seven kinds of lettuces at his farm near Goshen, New York. “But it’s come back. If we’re out of it for a few weeks, customers will complain.”

I’ve bought iceberg from Bialas; I love the fresh-picked flavor of the juicy white ribs and dark green outer leaves. Sometimes I chop and toss them with little more than some fresh herbs; other times I shred them for a refreshing slaw, in which the lettuce takes on the character of a demure napa cabbage. I might cleave the head into quarters and top them with my own, bold-tasting blue cheese dressing or even grill them so that they wilt slightly before I douse them with balsamic vinegar. Or I’ll use the broad outer leaves as a base for grilled meat or hummus. However I dress up my iceberg, I’m transported, comforted, satisfied.