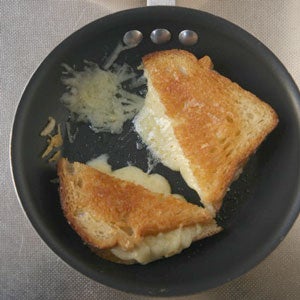 It was hardly the stuff that dreams are made of: processed cheese on packaged whole wheat bread. But for the five-year-old me, consuming it was a momentous experience. Of course, I didn’t know then that the sandwich I was eating was made with “cheese product”. I would have to grow up before I discovered what a truly great grilled cheese sandwich tastes like.

That epiphany came recently, in fact, after a visit to the Jura Mountains, along the French-Swiss border. There I was seduced by comte, France’s largest-selling Controlled Appellation of Origin (AOC) cheese. As with any new crush, I learned all I could: that semifirm comte is born of the distinctive milk of the region’s Montbeliarde cows, whose diet includes wild orchids, daisies, dandelions, and more than 400 other plant varieties; that it’s produced in the fruitieres, or cooperative dairies, that have dotted the landscape of the Franche-Comte region for centuries; that the Montbeliardes’ milk is partly skimmed and heated gently in copper-lined vats before being combined with rennet; that the resulting curds are broken into fine grains, put into molds for pressing, and set on spruce boards for a few weeks of aging before being entrusted to an affineur, who oversees the further maturing of the cheese.

In one fruitiere, Maison Marcel Petite Fort St-Antoine, a converted barracks in Pontarlier, France, that has been refurbished as an aging cellar, I stood awestruck before thousands upon thousands of pale yellow wheels of comte. Inside each of them, the earthy, funky, yeasty, effervescing process of fermentation was at work. It is in such cellars that comte develops hints of chocolate, nutmeg, apricot, tobacco, hazelnut, pepper, and caramel. The emphasis in the making of comte is not on uniformity, as with some AOC cheeses, but on individuality. A young cheese may smell like butter, an older one like fruit and spices. But, no matter the age, comte is a celebrated melting cheese, used in France for everything from fondues to souffles and potato gratins.

After returning from France to New York City, where I live, I bought a wedge of aged comte—in fact, a product that had been finished at the very same Fort St-Antoine cellars I’d visited—and carried it home. On my counter lay a loaf of fresh sourdough bread. It was time to make grilled cheese—grown-up grilled cheese, real grilled cheese. I dropped a dollop of butter into my skillet, sliced the bread and the comte, and cooked it, watching as the cheese melted and released a delightfully grassy, nutty aroma.

One bite was all it took; I knew I’d achieved perfection. Like even the humblest grilled cheese sandwich, this one, in its transcendent simplicity, amounted to much more than the sum of its parts.